Korg does bass and drum synthesis with volca kick

Just in under the wire before Roland hosts their own product shindig next week, Korg are here with a new volca to announce. The latest handheld instrument in that blockbuster line is something of an outlier: called “kick,” it’s more specialized than the rest. But it does look like more than just a box for making bass drum sounds (though it’ll do that if that’s what you’re after).

Now, in my view, the best feature of the original volca drum machine, volca beats, was its enormous analog kick. But Korg is betting they can win us over with something still better. The volca kick uses the self-oscillating resonance of the classic MS-20 filter as its sound source.

That should give you plenty of bass drum variety, extending some of the possibilities to other drums (toms) and melodic lines (using it more as a sound source / synth generally rather than a “kick” maker in particular). And it can indeed be fun playing with melodic basslines that provide the function a kick drum normally does. 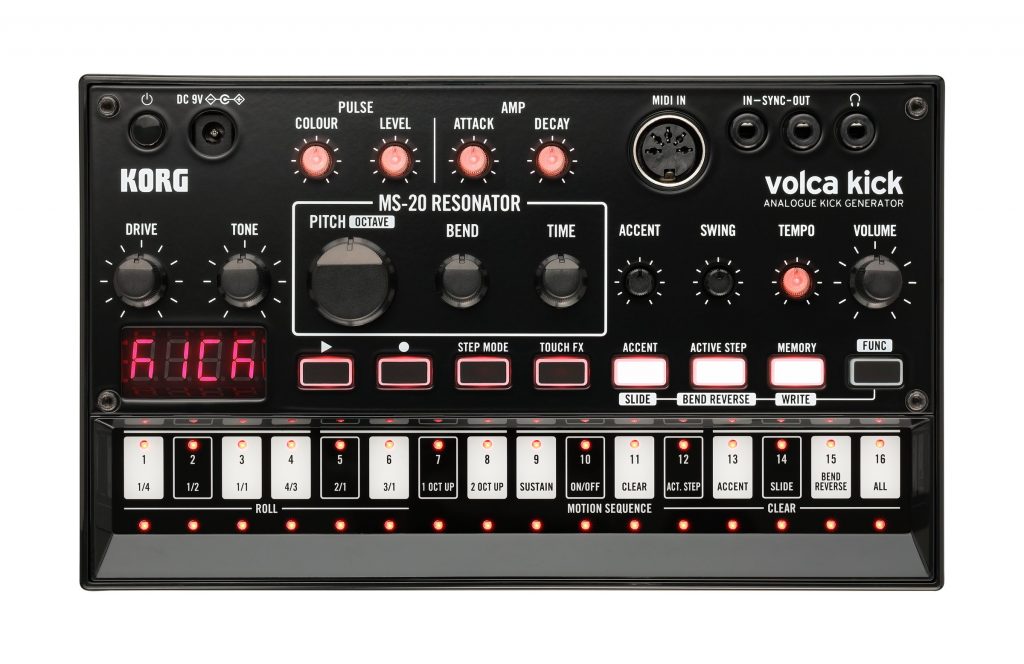 What might make you want to buy this, though, is that it’s a volca. So, you have battery power, loads of hands-on control, and a versatile step sequencer with touch control. That step sequencer now extends to a new effects feature which Korg don’t entirely explain but which sounds cool. Check out the rolls, though – while a “roll” doesn’t really make sense for a bass drum which you play with a pedal, the rhythms are set up to conveniently let you access basic polyrhythms and syncopation. (Sorry, if you want 1/32-note bass drum trills, you’ll have to resort to MIDI.)

This isn’t the first product of its kind. The Jomox MBase01 and MBase11 had more or less the same idea — make a small module that specializes in kicks. And as I’m imagining you might do with the volca kick, you can use the MBase as a melodic synth module, too. The Jomox has nothing like the Korg’s step sequencer, though, or the excellent volca hands-on controls – MBase users are either dialing up presets or controlling parameters via MIDI. But this might still be a horse rase: the Jomox sounds amazing, it might better emulate the 808/909 sound than the volca does, and it has a dedicated trigger input if you’re using it with something other than MIDI.

Given that Roland are dubbing their event next week “909,” I’m guessing there could be some connection to a drum machine there. Just a hunch. On the other hand, you wouldn’t expect anything remotely like the volca kick from any major manufacturer but Korg.

That said, I think the volca kick is an interesting entry and worth a look. And it was probably a better idea than the volca clap or volca cowbell, but… the night is young.

Also: that LED looks like it says hich. Oh well. 🙂

BlipCase is a custom solution for toting your compact music gear