There are those desserts that are subtle. And then there are the ones that are layered chocolate and peanut butter and cream that you drench in still more chocolate sauce, but in a way that holds together. You know – layering. Substance, a new soft synth from Output, is all about layering. It’s about making enormous bass things out of other already pretty-large bass things. And it represents a nice latest chapter in what the boutique software developer has been doing with sound design

While these days you can find plenty of meticulous analog, detailed samples and simulations, part of why I admire Output is that they aren’t about that. Working mainly with the Kontakt sampling engine, Output have produced music production tools that focuses on cutting-edge sound design. Their stuff is big, it’s true to their California home in that the sounds are fresh and somehow American, and it’s decidedly synthetic. Whether it was their launch product REV, a wild library of sounds based entirely on reversing samples, or the dancing modulation of their Movement “rhythm processor” effect, they help you produce results that say “yes, I am using a computer, and no, I’m not afraid of it.”

All of this could go very wrong. The last thing I think you want is a box full of in-the-moment presets that scream “please help me produce this obvious popular effect as quickly as I can.”

But in practice, that’s not what you get, and Substance is a perfect example of why. 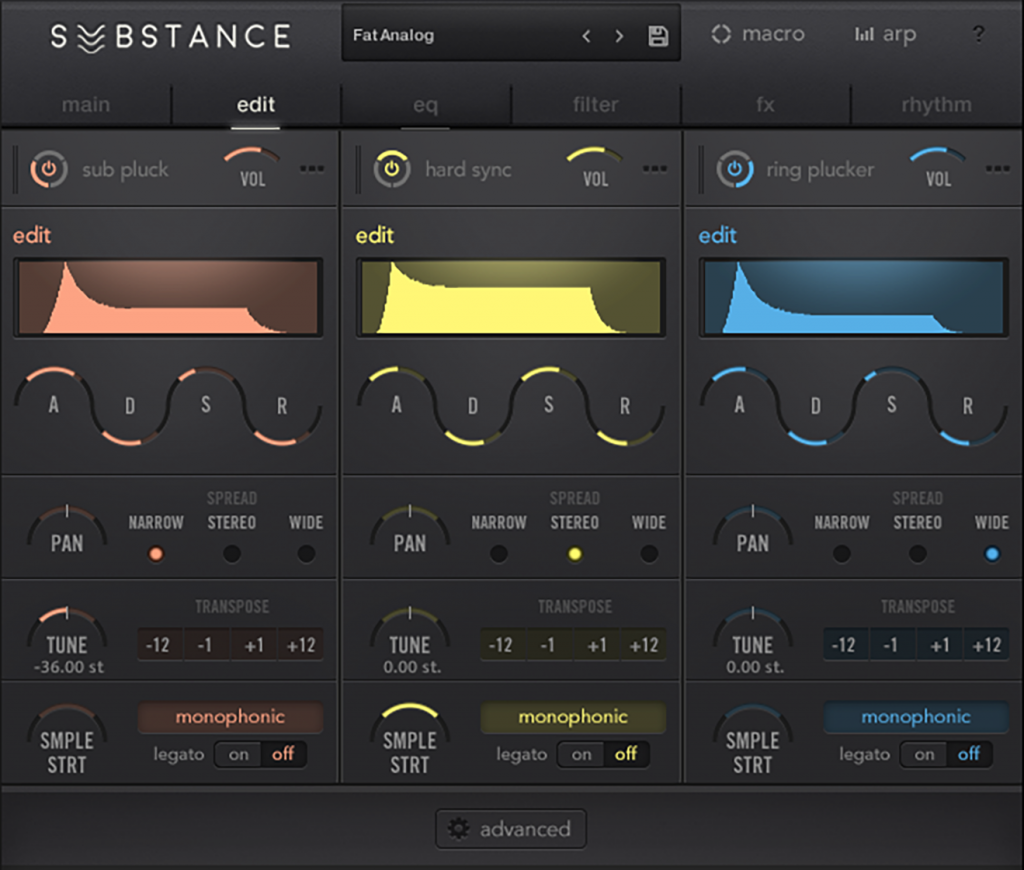 It’s better to describe Substance as a studio than a big soundware pack – just a studio that comes with some easy-to-disassemble presets.

Though if you want to EDM or multiplex film trailer out, of course – you can. Okay — Inception me, Skrillex!

It’s when you figure out how these things are made that they get interesting.

Each sound combines three underlying engines at once, taken from a variety of sources. So, you get electric and acoustic basses, sampled brass sections, synths, and sound design tools, each then heavily processed. Combine those into a sort of massive multi, a stack of stuff, and you begin to understand what Substance is about.

Now, I used to hate the sorts of presets you got on workstation synths when sound designers were showing off. You’d sort of hold down a key on a keyboard with a brick, run off and get a coffee, and then just wait to hear what the thing sounded like. Armed with lots of additional sample space and processing power, some soundware packs have made this much, much worse.

But because everything in Substance is actually built from a variety of tools, you can find a preset, disassemble some part of it, and rapidly go a different direction. In fact, I find the UI reminiscent of one of my favorite pieces of software of all time — Kai’s Power Tools. You’re given the feeling of combining different flavors of rocket propellant and seeing where you wind up.

And there is a whole studio inside. So in addition to layering three sample-based engines atop one another, you also have access to an advanced arpeggiator, a complete multi-effects lab, and a whole bunch of modulation and routing.

In fact, there’s so much power, that you actually welcome the presets even as a creative sound designer, because they give you something to hold on to — and then completely transform, if you so choose. You could start with some simple layers, then change them wildly with modulation and effects. Or you could start with some dense layers, and make them unrecognizable – or three dense layers, then change the character by swapping just one of them. You get the idea. 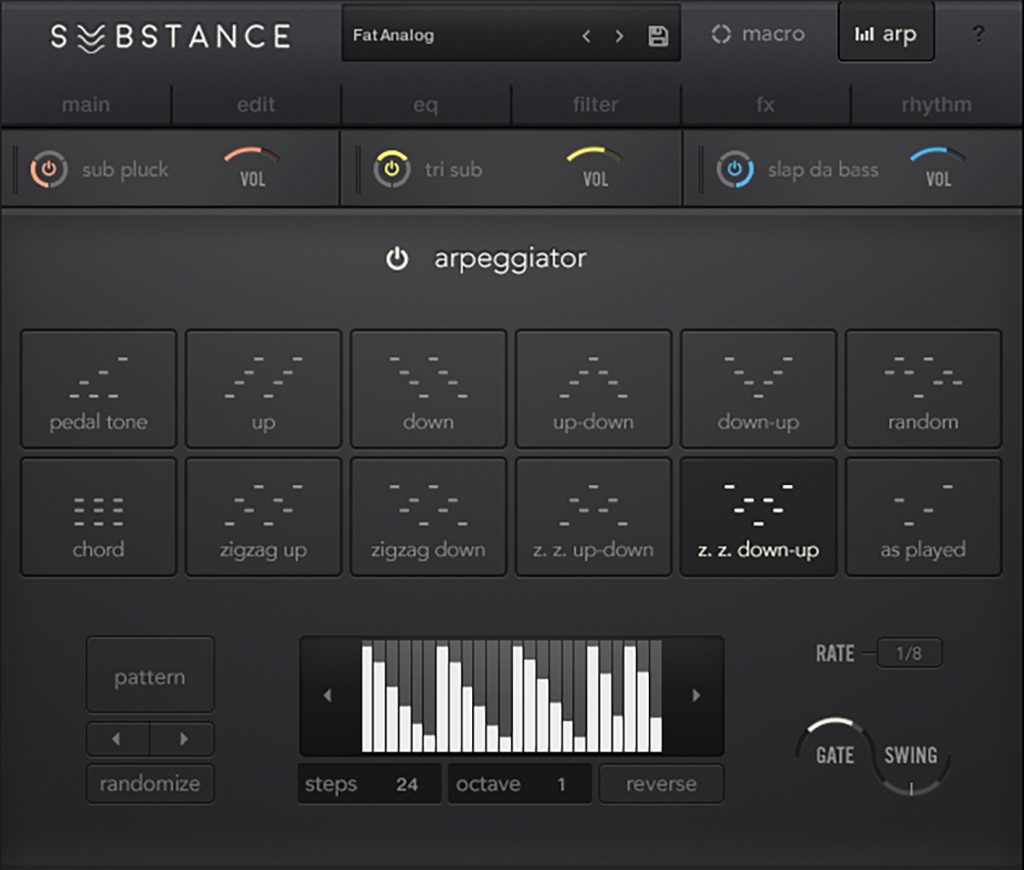 When I say “arpeggiator,” I mean something that’s quite a tool on its own. (Actually, it’d be nice to see this unbundled, but the stuff does work well as a suite.) 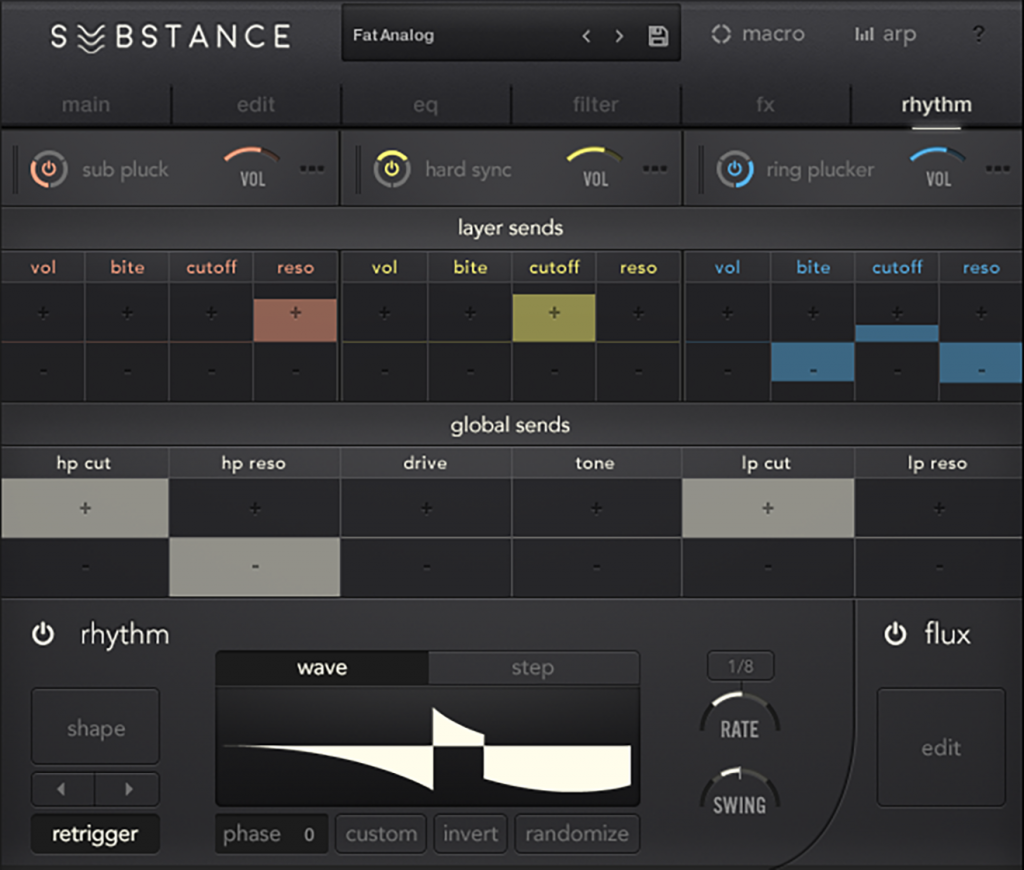 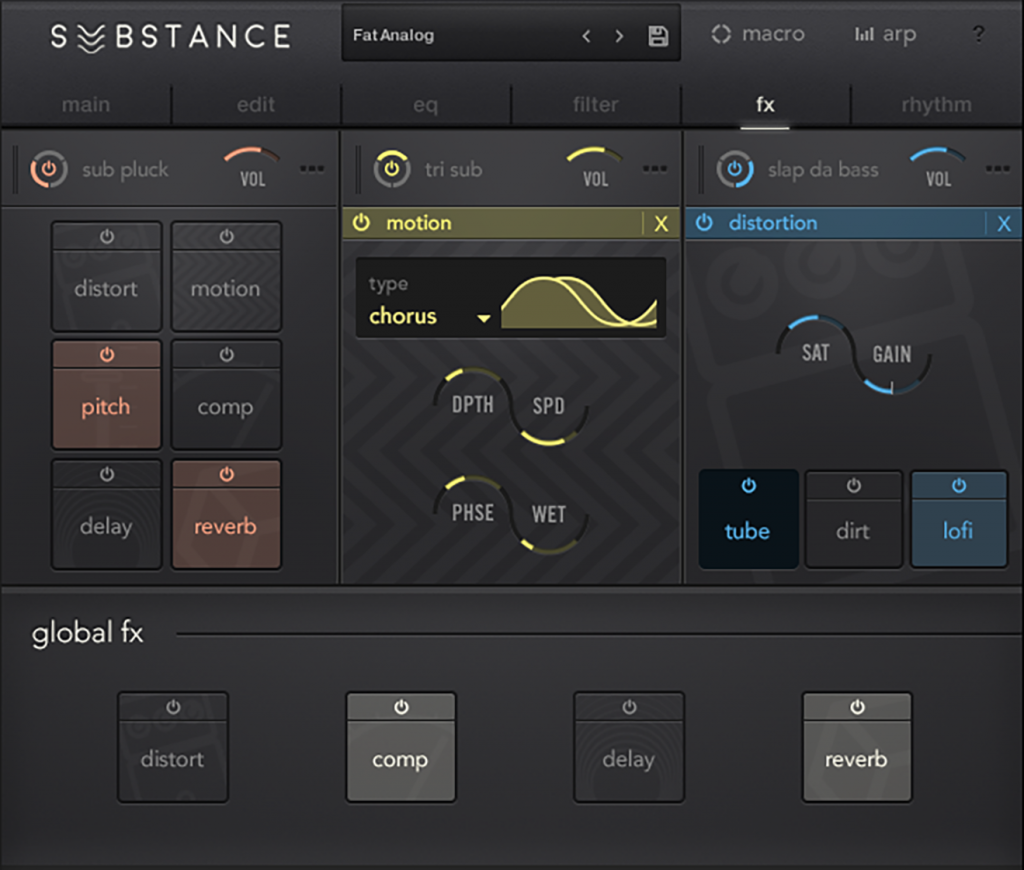 There’s a complete effects suite, too.

There’s some benefit to having spent some time with other Output products over time, because they’ve gradually built up an arsenal of clever effects and modulation that you get everywhere.

But there’s some beautiful stuff just in the distortion, the reverb, the filters, the delay, the compressor and so on. And then each sampled layer sounds great.

This is really interesting to me, because normally the complaint about software or presets is that it pushes you in a particular direction. In the case of Output’s stuff, though, I welcome that feeling – and I really normally don’t.

So on one hand, you get the sensation that the sound designers knew what feeling you wanted before you could describe it yourself. But that’s also because of this engine, because you can quickly change a sound from a very high level, or get into the nitty-gritty lower-level details if you choose.

I will do some writing about Output in general, but the best way to put this is to say is this – finally, someone understands that on one hand we’re on a tight deadline, and on the other, we’re still obsessive-compulsive about sound design and want to make sounds our own. Usually you have to sacrifice one or the other. 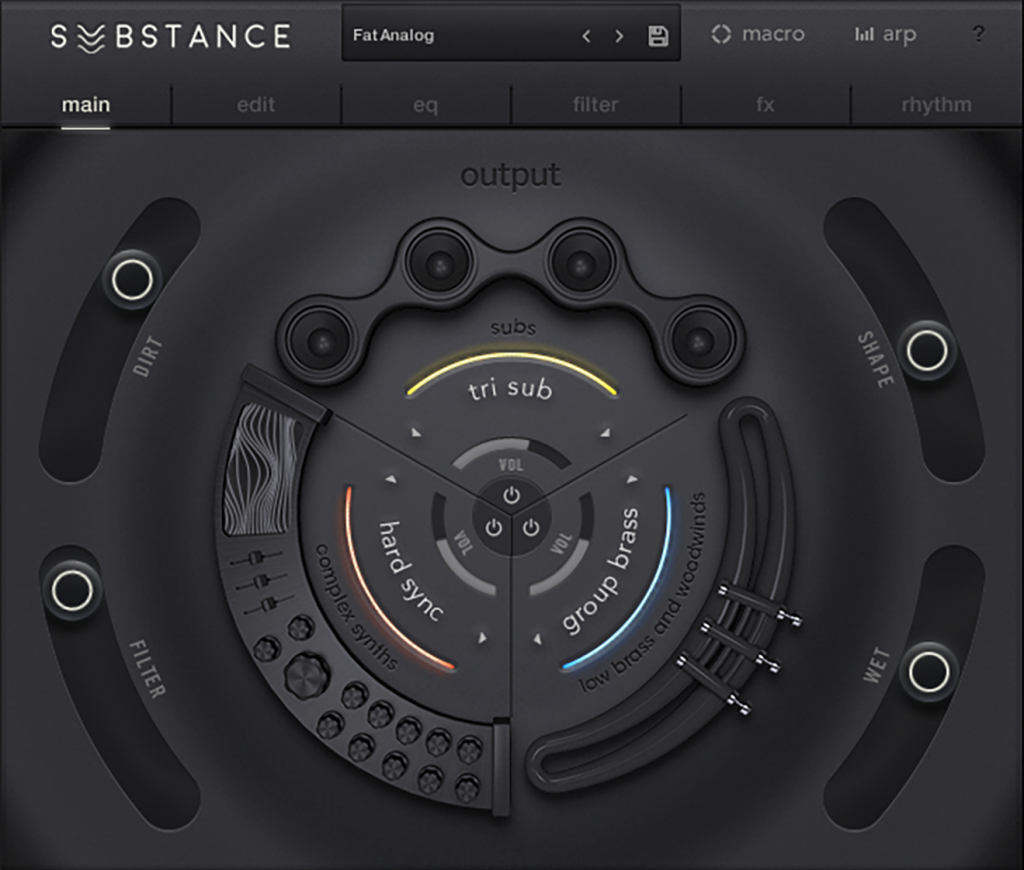 The overview screen, for navigating – some overtones of both Kai’s software from the 90s and the better stuff from Apple (Sculpture). 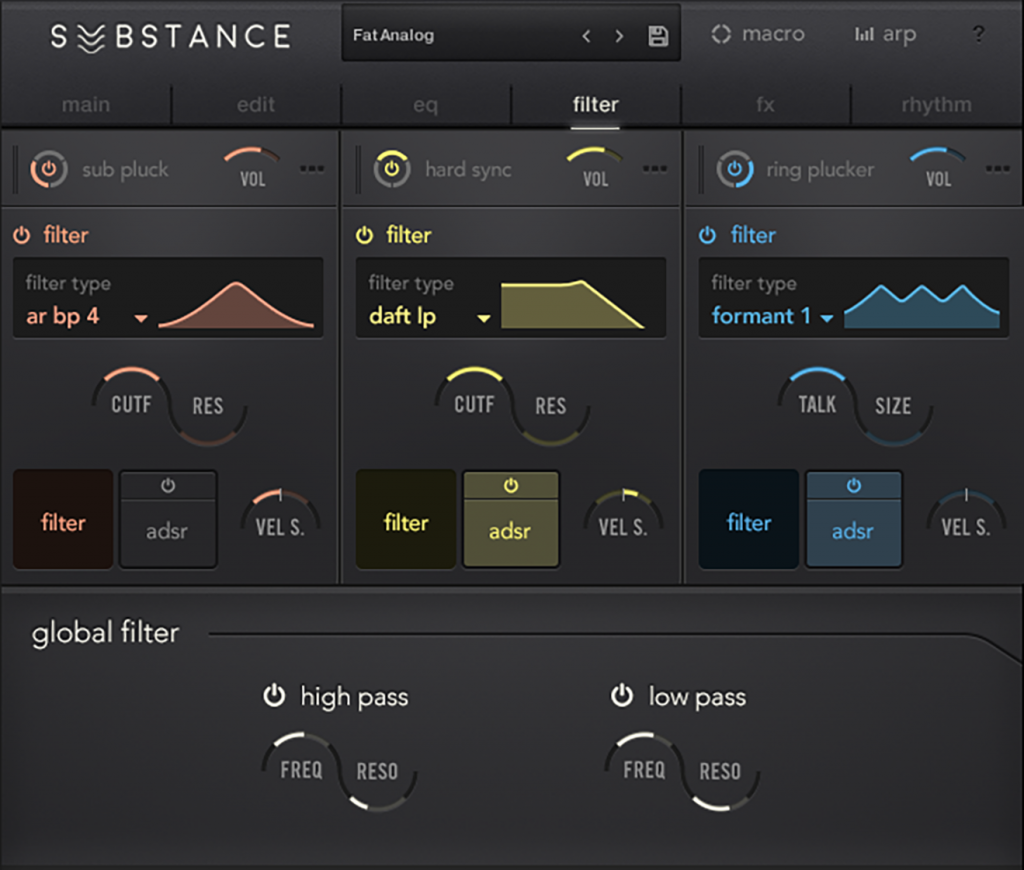 Deep in the filters screen.

If you’re thinking this isn’t going to be easy on your hard drive and your CPU, of course, you’re right. Answer: get an external hard drive, my copy is running just fine from mine. Bounce (or don’t put too much on top of this). I partly blame the lackluster CPU offerings on the Mac and ultrabook sides, though, for that – topic for another article.

If I just want a great bass synthesizer, or some acoustic bass sounds, or some from-scratch sound design, I’ll go elsewhere – of course. But if I want a sort of Mastering the Art of French Cooking set of thick bass recipes, this is the place.

And if it sounds like I’m gushing it’s because, well, it’s really not very easy to make me like big sampled sound libraries. So when I do, I’m impressed.