It was really hard for me to watch Apple’s “Hello Again” event today.

Understanding history is important – to a point. But Apple’s obsessive navel gazing in the Mac event today speaks volumes. This is a company with no real vision for what its most creative users actually do with their most advanced machines. So, instead, they look into the past.

And the Mac keynote was full of references to the past. The early 90s PowerBook 100 got a better pitch for its industrial design than the new MacBook Pro. And that’s with good reason: the PowerBook 100 was an historic machine. It was also proof that computer makers (even those named “Apple”) can innovate without necessarily having Steve Jobs at the helm.

Apple also gave us a rambling look at Apple TV – one that felt like it could have been made years ago. It showed us pictures of laptops from past decades. Heck, there was even a post mortem of the industrial design of a 1971 IBM mainframe.

What there wasn’t was any compelling vision for the future of the Mac.

The Mac mini, iMac, and Mac Pro are all left untouched. The iPad Pro, which starts to resemble the capabilities of a Mac, got no mention.

Since the unveiling of the iPad – even the iPhone – the Mac faithful have waited for Apple to apply its innovative vision of touch to computing.

What we’re left with is a disappointing mess. From the company that’s essentially proven to the human race how nice expansive touch screens are, you get a tiny crack of a touch panel along the top of the keyboard. 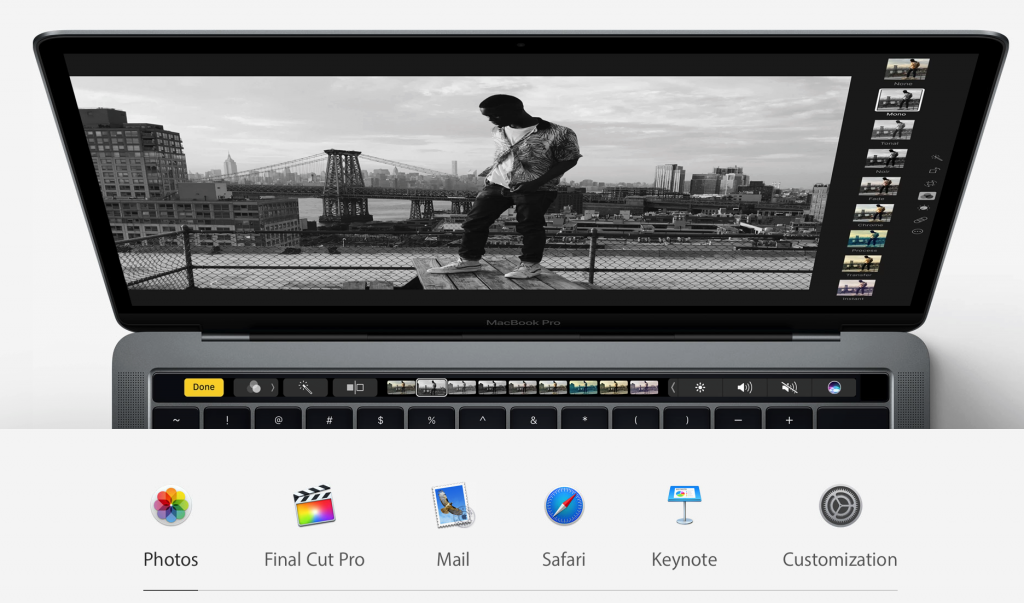 Apple’s own Logic Pro doesn’t merit a mention (yet).

In apps that don’t support it, it offers little advantage over the existing keys.

For consumers, it’s an added layer of complexity and inconsistency. Even in Apple’s (presumably) tightly-controlled demos, it wasn’t clear what it was even for. It’s a volume control and media keys. Or maybe it’s for sliders for parameters. Or maybe it controls … Word headings? Menu shortcuts?

The reason touch screens work so well is that they don’t have this added layer of abstraction. Whatever’s on the screen, you can touch. Now you’re looking at two screens, two touch input devices (trackpad and Touch Bar), and a keyboard, and you never know where things will be.

You’re going to hear a lot of pro writers tell you that “average” users will like this. I’ll take that bet. I think this is a solution in search of a problem. And consumers don’t always know what they want in advance, but it’s rarely additional complexity.

So this is bad for consumers, but at least they’ll see the Touch Bar as a gimmick on purchase and then ignore it. For pros, it’s actually an insult.

When it comes to pros, I’m even more at a loss.

If you asked video editors if they wanted to do delicate edits via a tiny, imprecise touch strip on a laptop keyboard, of course they’d tell you you were nuts.

Graphics artists would wonder what you were smoking that you thought function keys – even fancy touch function keys – were “expressive.” They’d wonder that even if you weren’t the company making the Apple Pencil and iPad Pro.

I think music is always a good test of how expressive an interface was. And bringing a DJ app onstage – as Apple did with djay – proves how awful this tiny touch strip is. Watching someone DJ with the top of a keyboard was just embarrassing, doubly so from the company that makes the iPad and as recently as this year’s WWDC showed off its ability to be used by blind people.

This would be cool, in other words, if there weren’t touch laptops available. Now, making laptops that fold into tablets and whatnot is problematic, too, as is the infamous “gorilla arm” syndrome. But products like Microsoft’s Surface line are finding intelligent solutions to that.

And it begs the question: why didn’t Apple at the very least find a way to give you a high-speed, low-latency connection between the iPad Pro and the laptop? That’d be far more useful for musicians, video editors, and visual artists than a touch strip on the keyboard would. The popularity of third-party products for doing this is even more evidence.

Okay, so maybe the Touch Bar is just a misstep and the rest of the computer is worth buying. But the problem is, strip away the soon-to-be-talked-about Touch Bar, and what you get isn’t so different from other laptop offerings on the PC side. It’s just more expensive and less configurable.

You need the 15″ MacBook Pro – starting at US$2399 – to get so much as a dedicated GPU. And don’t forget to budget for adapters. Because now you get four Thunderbolt 3 ports and nothing else. That decision might even make some sense, but it’s going to mean remembering a bunch of adapters and adding their cost to the purchase price.

So, if you’re really dedicated to staying on MacOS, you can at least go get an Apple laptop. And maybe you’ll be happy with it.

But it’s telling Apple, out of character, didn’t once mention their competition. That’s because the competition has innovative touch and pen input integrated with the product – so you wouldn’t compare the anemic Touch Bar. The competition is faster, and/or costs less – so those graphs turned to older Apple products and even the poor PowerBook 100 rather than compare to the PC. We didn’t even get a thinner/lighter comparison, because even that ship has sailed.

The added performance is essential, as the industry adds three dimensional content and virtual reality. Integrated chips on anything marked “pro” just doesn’t make sense in the present context.

The Mac made its name because it embraced desktop publishing and graphics when the PC missed the boat. Now, it seems Apple is about to miss next-generation graphics, 3D, and virtual reality. Even if some of those are gimmicks, the fact that we live in a three-dimensional world and have two eyes suggest it’s still an important development.

And that leaves the OS. But Apple has flubbed that, too. Recent OS updates have caused significant audio woes, even as Microsoft – for all their flaws – focus effort on improving their offerings for audio production. Most recently, Apple has made the bizarre decision to try to pressure users into using cloud functionality to automatically off-load files, even though that’s a terrible idea for anyone who does media production for a living. So, what’s the pitch for pros? Siri?

All of this might be tragic, if Apple were the only company innovating. Fortunately, that isn’t true. The Verge said today that Apple’s timing was expertly timed. That’s a little bit like standing with the French at Hougoumont and declaring the battle of Waterloo is about to be expertly timed. Timing, yes. Execution, not so much.

Worth saying, too, is that Microsoft’s clever 3D demos aren’t just a fluke. The company has invested heavily in research, including free-form Bell Labs-style “what-if” experiments. Apple’s innovations have focused on supply chain and engineering. That has worked for a while, but it does little when technologies shift radically, as is happening with 3D.

Microsoft’s innovative announcements this week deserve better than to be squeezed into a story about everything Apple is doing wrong, so I’ll leave that for later.

But suffice to say: Microsoft is embracing touch, 3D, and creativity, and making hardware with new ideas.

Apple this week just isn’t doing any of that. I’m done ranting, but … I hope that Apple comes back.

You know: the one from the past.

Pictured: this idea was tried before, as observed in this tweet.

Joué is a modular touch sensitive controller that changes into anything