The expressive LinnStrument grid is now $999, and a step sequencer

Whether or not drum machines have soul, you can bet the LinnStrument does. The creation of Roger Linn couples a grid layout – one that keeps pitch relations consistent for easy playing – with expressive touch sensing. Until now, you could get a US$1499 version with 200 pads. A new version drops the price to $999, and uses a 16 * 8 = 128-pad layout, so it’s both cheaper and more portable. And all the LinnStruments now get step sequencing.

But let’s back up. There are two things that make the LinnStrument unique. One is its onboard expressive touch control. It senses continuous pressure and slides/bends, and it’s able to transmit those via MPE (MIDI’s new standard Multidimensional Polyphonic Expression). That puts it in a league with the ROLI Seaboard line and the Madrona Soundplane, among a handful of others, and means out-of-the-box expression support in the likes of Apple Logic and Bitwig Studio. With supported instruments like Apple’s Sculpture, you’ll find that nuances of your finger pressure, or sliding multiple notes up and down at once, are instantly translated into sound. 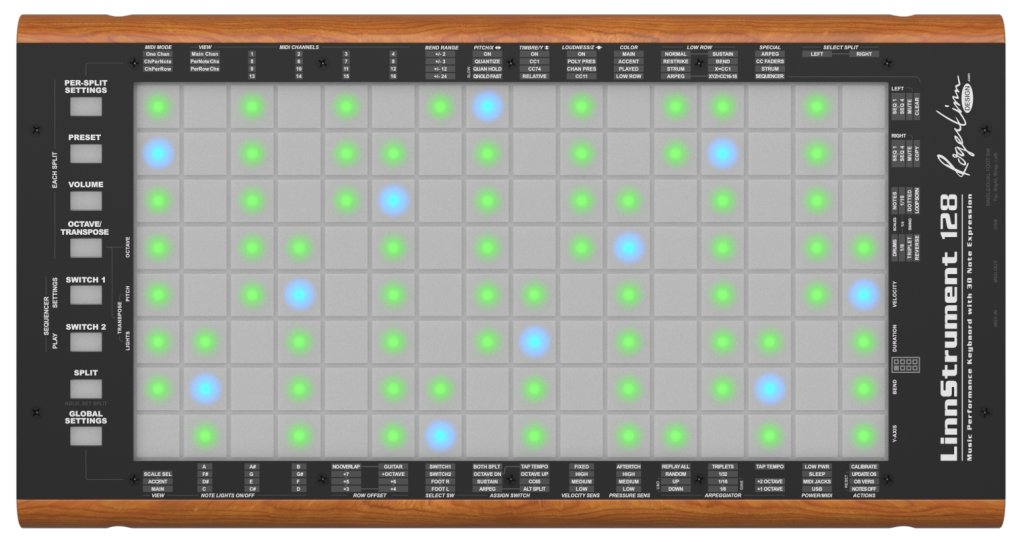 The second ingredient is the LinnStrument’s grid layout. That array of light-up squares might make the LinnStrument look like a monome or a Novation Launchpad, but there are new advantages thanks to bends and slides. As Roger points out, the advantage of a grid is that you can create a layout in which interval distance is consistent. That already has an edge for transposition, though at least a person with a piano background has learned how to sort this. For consistent slides, it becomes essential. (The piano layout isn’t intended for sliding your finger up and down.)

I’m a big fan of the ROLI’s piano-style layout. I think it’s best to think of these as two different animals – just ones that send the same flavor of MIDI messages (if desired). A piano layout is always going to be comfortable for piano players – and the tactile sensation of the ROLI, while an aquired taste, is like nothing else. The LinnStrument is closer in lineage to a fretboard than a piano, for its part, and a step sequencer only makes sense with a grid.

To me, the new 128-pad layout is really a win – not just because it gets it at a more accessible price point or because the device becomes more portable, but because it’s a logical layout for a lot of people, too. And Roger knows a little something about grids: his drum machine designs have been the ones that popularized the touch-sensing pad and 2×8 and 4×4 layouts.

What’s nice about the new step sequencer is that it means the controller becomes a more self-contained compositional tool as well as instrument controller. It’s a fully fleshed-out concept, too:

Whichever size you opt for, the LinnStrument still supports 32 steps – 2 pages of 16 on the bigger model, or 4 x 8 on the new LS128. You can load up patterns, too. Each project holds four patterns for each of the two sequencers. And you can store up to 16 projects on the device. And you can load / backup / offload projects using your computer via the updater app.

Sync is flexible, too: the LinnStrument both sync to MIDI clock and generates a MIDI clock signal. And you can adjust tempo live as you play.

There’s a whole lot in this new firmware, not just the step sequencer. For added expression, for instance, the update adds release velocity (adjusting to how you lift your finger from a pad), plus 14-bit velocity values. More (a lot more):

To get a sense of how this all fits together in terms of expression, it’s worth watching some performance videos. (The music itself may or may not be your cup of tea, but you’ll see how the instrument is played.)

For instance, here’s Jeremy Cubert from Linn’s own channel:

Showing just how much you can play, you get instruments from Sample Modeling, Apple Logic Pro X, Impact Soundworks, Applied Acoustic Systems and Orange Tree Samples.

Here’s another, using the wonderful Pianoteq piano plug-in (and letting us step away from slagging the piano):

Visualists, here’s the info on the GPU in the new Macs, Surface Books