The demise of Keyboard Magazine, after 41 years

Keyboard Magazine will cease to exist as a publication, after having been continuously published since 1975. And this isn’t just another “print is dead” footnote. Keyboard was the publication that defined commercial writing about electronic musical instruments. And whatever the logic behind the decision, the demise of Keyboard says something about the state of both publishing and electronic music production – and its absence will be felt.

Keyboard will be rolled into Electronic Musician, with only the EM name surviving. Gino Robair will continue as editor-in-chief of EM.

This is truly the end of an era – an era Keyboard itself began.

Originally, electronic musical instruments were the domain of electronics publications for hobbyists and similar enthusiast magazines. That’s how Bob Moog’s Theremin design came to appear in 1954 in something dubbed Radio and Television News. Keyboard wasn’t the first dedicated publication to cover the field of electronic musical instruments. The first publication of some significance was Electronic Music Review, a somewhat informal and wonky quarterly begun in the late 60s right in the R.A. Moog plant itself. That publication hosted articles by the likes of Stockhausen and Berio alongside Carlos and Moog – a reminder of how experimental early synthesizer use tended to be.

It’s almost hard to remember in the Internet-saturated age just how different the world in which the synthesizer came into being was. Academia had access to the cutting edge; hobbyist publications covered simple circuits. But there was nowhere for bleeding edge technology to come together with popular musical practice; nowhere where musicians and tech might easily overlap. 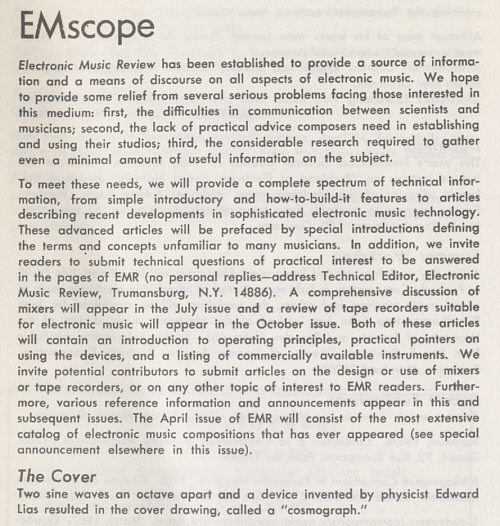 This is how Electronic Music Review announced its intentions back in 1967. (Source.)

So just as it mattered that Moog eventually shipped the Minimoog with a keyboard, it was ground-breaking that Keyboard was, from the start, a commercial endeavor with widespread appeal. This was the first publication to go into real circulation, the first with glossy ads. 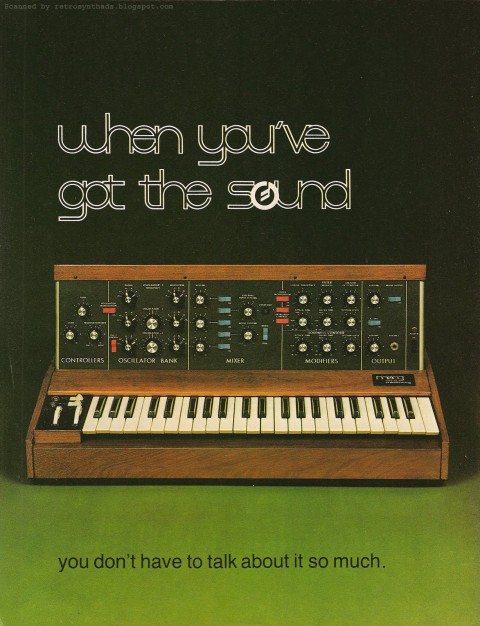 Minimoog, as seen in the September ’79 issue. Just the Moog ad archive alone is something to see – and it’s basically all from Keyboard/Contemporary Keyboard.

Oh yeah – the ads. Advertising isn’t something people outside of publishing tend to talk about, except when they’re annoyed. But do an image search online for vintage synths, and spot how many of the advertisements you’ll find are from Keyboard. Some of these are, quite frankly, beautiful. There are futuristic images of luscious keyboards floating in space; full-page and double-page spreads.

Keyboard was defined by advertising. It covered the expanded full-time staff, and made a platform where rock stars wanted to be featured. It filled the pages between articles with lust-inducing electronics shots. As much as people talk ad blockers and complain about editorial independence, how many of you reading this spent time pouring over every page of Keyboard – every editorial word, every ad, alike? This is the lifeblood that allowed Keyboard to rise above a simple manufacturer-made hobbyist publication with a few hundred readers, like the wondrous but obscure Electronic Music Review. And it was the lifeblood that virtually everyone who ever worked on the publication imagined would someday run out – and mean the end of the publication.

(What you now know as Electronic Musician had a similarly humble origin story to EMR – as Polyphony, published by PAiA Electronics. That’s why Keyboard, not EM, gets the credit in synthesizer history for originating the mainstream publication as a genre.)

I mention ads because I think only those who have worked in publishing know just how much this is an industry that’s about keeping the lights on and the business rolling. It’s a struggle. It’s doubly so in print, because print requires the outlay of capital to print the publication. And advertising payments in print don’t happen immediately, either – meaning the whole business endeavor begins with a significant cash flow challenge.

In print, you can add to that challenge corporate consolidation – both the distribution apparatus that gets publications into people’s hands (as at the newsstand at your airport), and the companies that publish the magazines.

I trust Gino Robair of all people to continue the heritage of Keyboard in EM. At the same time, it’s worth reflecting on the loss of a publication with a particular angle. That angle was right in the name – what was first less succinctly titled in 1975 Contemporary Keyboard. 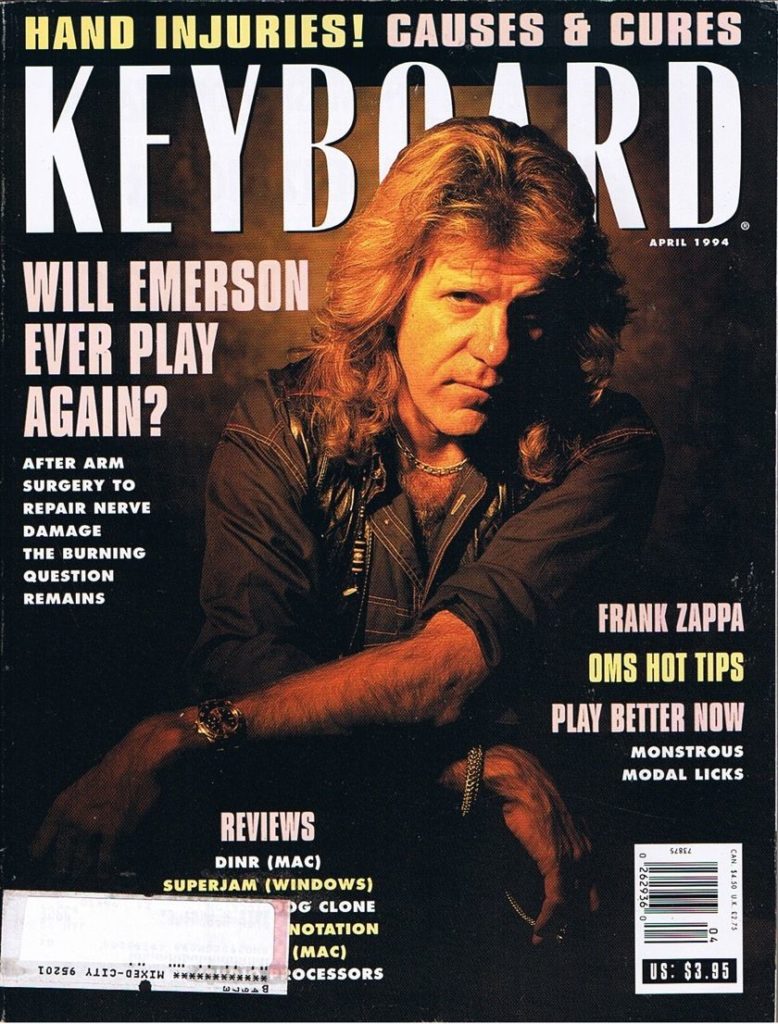 Keyboard was a magazine for keyboardists. The publication always had some challenges in popular tastes in that regard – the keyboard as an instrument tends to come in and out of bands. But in losing Keyboard, you risk losing everything that went with it – including those articles about keyboard technique and excerpts of sheet music.

And I think that’s significant in and of itself. The economics of music gear publishing tend to pull us away from technique generally, and from musical instrumental technique in particular. If we aren’t careful, the gear may push the artist right off the cover; “how to sound like…” takes place of how to play.

Keyboard was most awkward because of this mission, perhaps, but also most meaningful. Wendy Carlos could talk composition; Herbie Hancock could talk about playing. I wrote an obituary once for Andrew Hill.

The future of the keyboard, of course, is now as uncertain as that of Keyboard. And I know some people have eloquent arguments for why synthesizers shouldn’t necessarily be chained to keyboards as input devices – or, by extension, to musical genres that prefer those keyboards. But if you forget about the keys and think about the human hands that touch them, Keyboard at its best was about what those hands were doing, too.

There’s actually too much of Keyboard over these decades for this to be a proper obituary. For that, I’d turn to colleagues who spent a lot more time than I did at the publication.

What I will say is that CDM, and my career, likely wouldn’t exist without Keyboard. In addition to Chris Breen at Macworld, Ernie Rideout at Keyboard gave me my start and got me hooked on writing in this field. Stephen Fortner continued to be a great partner to work with on some tremendous stories, including the cover story that marked the Minimoog’s 40th anniversary. I got to know Jim Aikin, a veteran of Keyboard back to the 70s, who was the toughest and most important editor I ever had. Somehow, Jim put up with me through the 600-page Real World Digital Audio and saved it. (Now, bizarrely, people are reading it in its Polish translation – so Jim, you’ve helped with that, too, unwittingly.) And Francis Preve, who has been a particular inspiration to me and early on honed in on the modern state of electronic production for the publication, I met thanks to the magazine, too.

That’s my own history. Synthesizer history is also tied up in this publication, one in which Kate Bush was a cover, Wendy Carlos was a voice, and Bob Moog had a byline.

These fragile projects bring people together, in ways that are nearly impossible to predict or even describe. And yes, often someone out there is reading, and that leads people places too.

So, now things are changing. And to think that positive change is easy and inevitable, or indeed that change is ultimately positive, is incredibly naive.

Whether it’s Gino at EM, or any of our colleagues, or me, all of us in music technology face some real challenges and rapid changes. Audiences, technology, and the business of publishing are all changing at tremendous speed, and all present major uncertainties looking forward.

We have to navigate those waters in order to keep telling stories about music.

And I think it’s very important that we not lose what Keyboard has represented. We need connections to musical practice and technique. We need, I believe, keyboard players. And we should even think about the power of those ads over the years, because commercial publications are, for all their flaws, what enable writers to follow their passion and readers to hear their words.

Through that weird alchemy of revenue and editorial, we have to find some way to make sure we can share stories of how humans and technology come together to make music.

Keyboard may be gone. But I hope what it accomplished can continue in new places.

Any Keyboard writers and editors wanting to help make a history, I’d love to chat. The good thing about the Internet is, content can exist separately from time – and some things can seem to live, if only in illusory fashion, forever.

A side note / plug — one slice of history I got to edit is Keyboard Magazine presents the Evolution of Electronic Dance Music. In it, you’ll see that Keyboard could prove its independence from advertisers – there’s an extended discussion of the early bugs in the MPC. And you’ll watch as music evolves alongside the magazine. But that’s only one tiny microcosm.

Send MIDI messages faster than ever, right from the command line

Now your Nord can sound like the very first Steinway, No. 1

history
PsyTexx is a forgotten tracker for Palm PDAs – with features like distortion
history
Connecting MLK’s death to Hip Hop, and reading on Black identity and sound
history
Autechre dropped a 5.5 hour mix to celebrate the re-release of Artificial Intelligence compilation
history
Roland made an egg-shaped alien piano with flying drone speakers for its 50th anniversary