Modular synthesizers present some beautiful possibilities for sound design and composition. For constructing certain kinds of sounds, and certain automated rhythmic and melodic structures, they’re beautiful – and endure for a reason.

Now, that description could fit both software and hardware modulars. And of course, hardware has some inarguable, irreplaceable advantages. But the same things that make it great to work with can also be limiting. You can’t dynamically change patches without some plugging and replugging, you’re limited by what modules you’ve got bolted into a rack, and … oh yeah, apart from size and weight, these things cost money.

So let’s sing the praises of computers for a moment – because it’s great that we can choose either, or both.

Money alone is reason. I think anyone with a cheap-ass laptop and absolutely no cash should still get access to the joy of modular. Deeper pockets don’t mean more talent. And beyond that, there are advantages to working with environments that are dynamic, computerized, and even open and open source. That’s true enough whether you use them on their own or in conjunction with hardware.

It’s free, it’s open source, it’s a collection of modules built in Pure Data (Pd). That means you can run it on macOS, Windows, and Linux, on a laptop or on a Raspberry Pi, or even build patches you use in games and apps.

And while there are other free modular tools for computers, this one is uniquely hardware modular-like in its design — meaning it’s more approachable, and uses the signal flow and compositional conception from that gear. Commercial software from Native Instruments (REAKTOR Blocks) and Softube (Modular) have done that, and with great sound and prettier front panels, but this may be the most approachable free and open source solution. (And it runs everywhere Pd runs, including mobile platforms.)

Sure, you could build this yourself, but this saves loads of time. 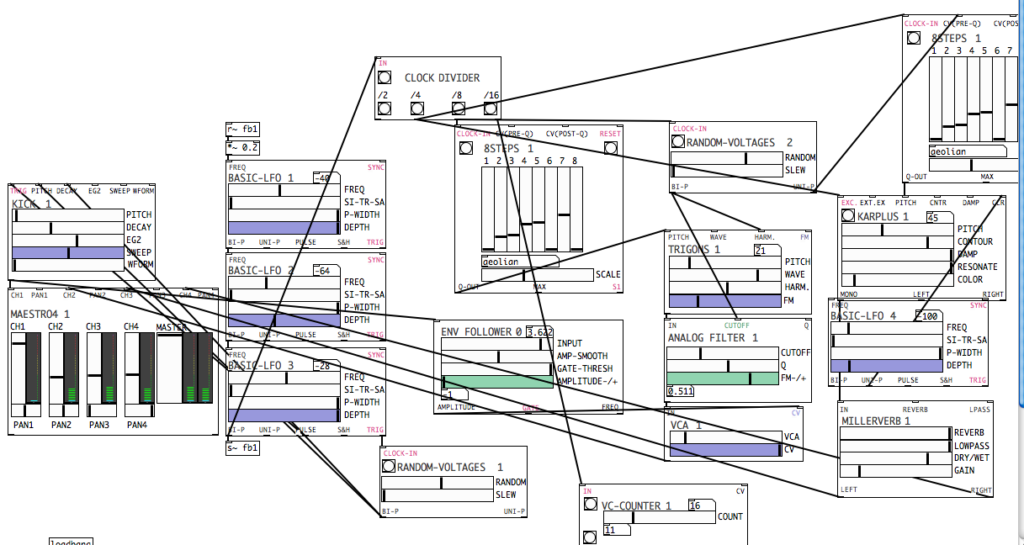 You get 67 modules, covering all the basics (oscillators and filters and clocks and whatnot) and some nice advanced stuff (FM, granular delays, and so on).

The modules are coupled with easy-to-follow documentation for building your basic West Coast and East Coast synth patches, too. And the developer promises more modules are coming – or you can build your own, using Pd.

Crucially, you can also use all of this in real-time — whereas Pd normally is a glitchy mess while you’re patching. Johan proves that by doing weird, wonderful live patching performances:

If you know how to use Pd, this is all instantly useful – and even advanced users I’m sure will welcome it. But you really don’t need to know much about Pd.

The developer claims you don’t need to know anything, and includes easy instructions. But you’ll want to know something, as the first question on the video tells me. Let’s just solve this right now:

Q. I cannot get my cursor to change from the pointer finger to an arrow. I can drag modules and connect them but I can’t change any parameters. What am I missing?

A. That’s because Pure Data has two modes of operation: EDIT mode and PERFORMANCE mode. EDIT mode, the pointer finger, lets you drag stuff around and connect cables, while PERFORMANCE mode, the arrow, lets you interact with sliders and other GUI objects. Swap between the two easily under the EDIT menu in Pure Data or by shortcut cmd+e [ctrl-e Windows/Linux]

This is also a bit like software-with-concept album, as the developer has also created a wild, ear-tickling IDM EP to go with it. This should give you an idea of the range of sounds possible with Automatonism; of course, your own musical idiom can be very different, if you like, using the same tools. I suspect some hardware lovers will listen to this and say “ah, that sounds like a computer, not warm analog gear.” To that, I say… first, I love Pd’s computer-ish character, and second, you can design sounds, process, mix, and master to make the end result sound like anything you want, anyway, if you know what you’re doing.

Johan took a pretty nerdy, Pd purist angle on this, and … I love it for what it is!

But this is truly one of the best things I’ve seen with Pd in a long time — and perhaps the best-documented project for the platform yet, full stop.

It’s definitely becoming part of my music toolkit. Have a look: