Cobbling together a rig for documenting your work as a musician/DJ/producer/vocalist is, let’s face it, kind of a nightmare. Sharing your work could be a great pleasure – but it often feels like an extra job you have to work.

The iPhone (or more generally smartphone) has been kind of a mixed blessing. The software/sensor combination, while powerful and always in your pocket, are great. But nothing else about a phone is well suited to shooting anything above basic quality stuff – because you’ve got to hold the thing steady and capture audio effectively (sometimes multiple streams of audio).

So, a lot of musicians I find are turning to the GoPro. But it’s only natural that we’d see some more artist-friendly options (since those needs aren’t quite the same as, like, people snowboarding).

Zoom have some offerings that look appealing in the standalone/dedicated category – basically, coupling good internal mics and mic attachments with their own cameras.

If you want to use your phone, though, the solutions from IK Multimedia keep getting more complete.

First, there’s the app – updated this week. iRig Recorder 3 is available for both iOS and Android (meaning you can use some of these great new Android phone cameras, like Google Pixel, and you aren’t limited to Apple).

The banner feature is that you add video features to audio. That’s essential, as sound is sort of a second-class citizen on the dominant social networks – and you can’t get people’s attention with it if their device’s sound is muted. (You need moving pictures to snag their eyes, so you can presumably convince them to unmute.)

But there are other serious features here, too – including support for connecting the app to other apps, if you’re invested in the iOS app ecosystem for production. The redesigned interface now includes:

New audio effects: doubling the previous version, you now get a pretty serious arsenal of effects. You can change speed and pitch (useful for practice and transcription), add compression and EQ (essential), and even do creative stuff like morph or add reverb, chorus, and delay. This coming from IK, the stuff is likely to sound good.

Text and photo markers for precise editing. Pairs well with added video support, as does:

Now integrates with your (iOS) studio. For those who want to integrate with a workflow with other apps, there’s Inter-App Audio and Audiobus compatibility. 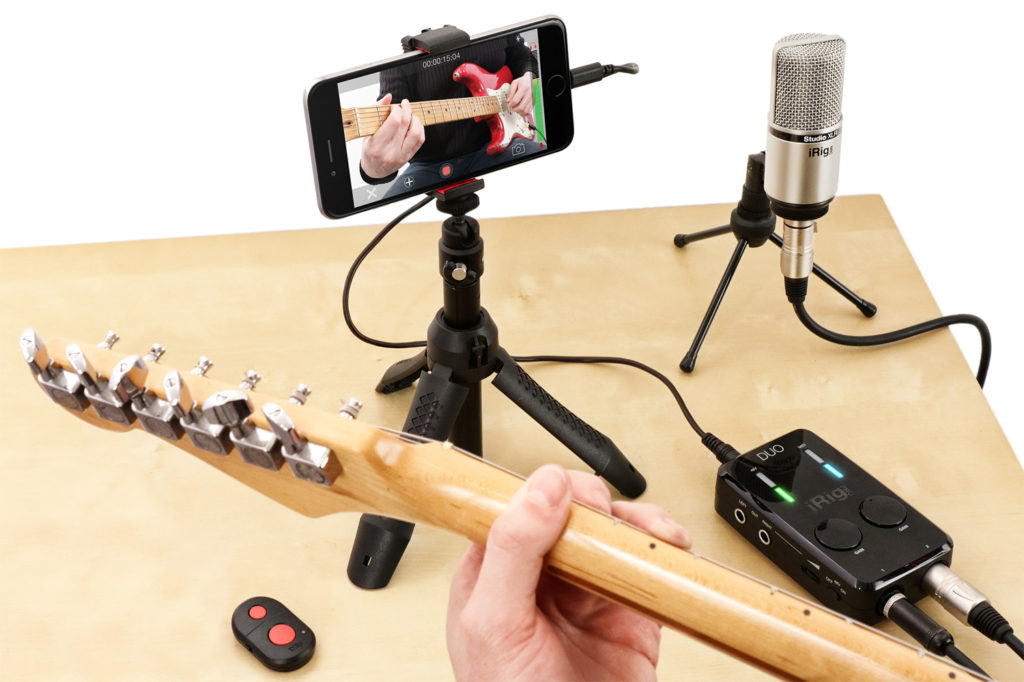 This is worth some separate look, but then all this is designed to integrate with IK’s line of audio accessories. Those are all illustrated on the product site below. This includes some handy accessories for holding your device steady, recording from a mic, connecting an instrument, or recording line signal.

I’ve got some gear from IK; I’ll try to put this together and do a proper test – which, truly, will be a real world one. That iRIG Duo is especially handy: