ROLI are filling out their mobile line of controllers, Blocks, with a two-octave keyboard – and that could change a lot. In addition to the wireless Bluetooth, battery-powered light-up X/Y pad and touch shortcuts, now you get something that looks like an instrument. The Seaboard Block is an ultra-mobile, expressive keyboard for your iOS gadget or computer, and it’s available for $299, including in Apple Stores.

If you wanted a new-fangled “expressive” keyboard – a controller on which you can move your fingers into and around the keys for extra expression – ROLI already had one strong candidate. The Seaboard RISE is a beautiful, futuristic, slim device with a familiar key layout and a price of US$799. It’ll feel a bit weird playing a piano sound on it if you’re a keyboardist, since the soft, spongy keys will be new to you. But you’ll know where the notes are, and it’ll be responsive. Then, switch to any more unusual sound – synths, physical modeled instruments, and the like – and it becomes simply magical. Finally, you have a new physical interface for your new, unheard sounds.

For me, the RISE was already a sweet spot. But I’ll be honest, I can still imagine holding back because of the price. And it doesn’t fit in my backpack, or my easyJet-friendly rollaway.

Size and price matter. So the Seaboard Block, if it feels good, could really be the winner. And even if you passed up that X/Y pad and touch controller, you might take a second look at this one. (Plus, it makes those Blocks make way more sense.) 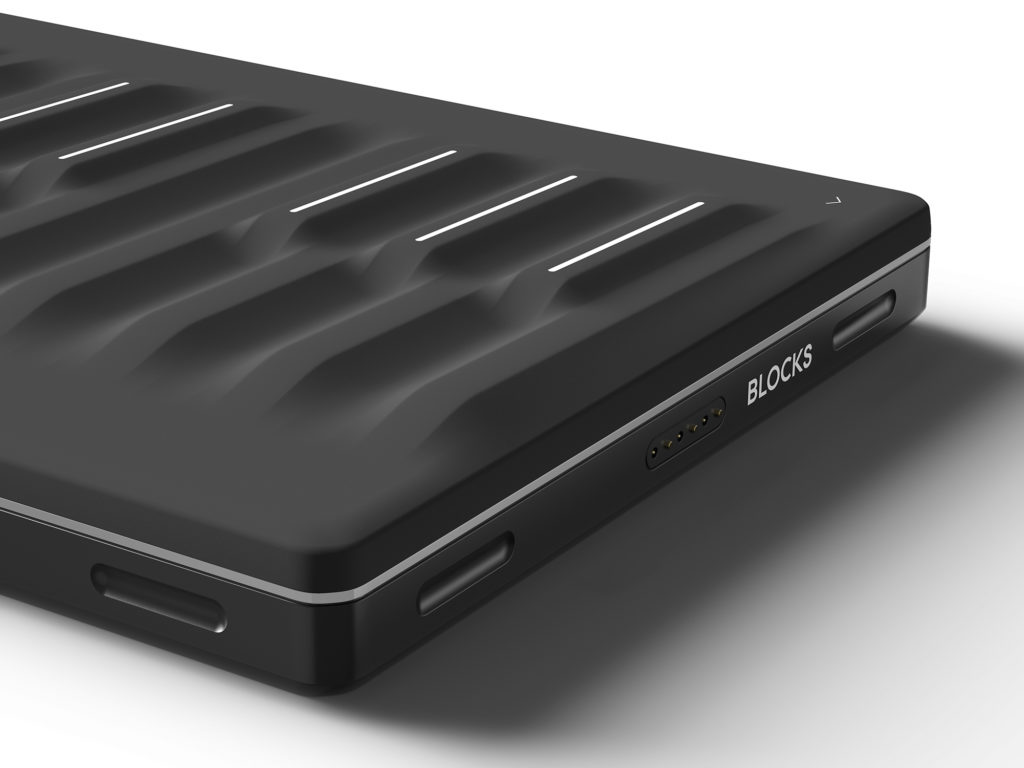 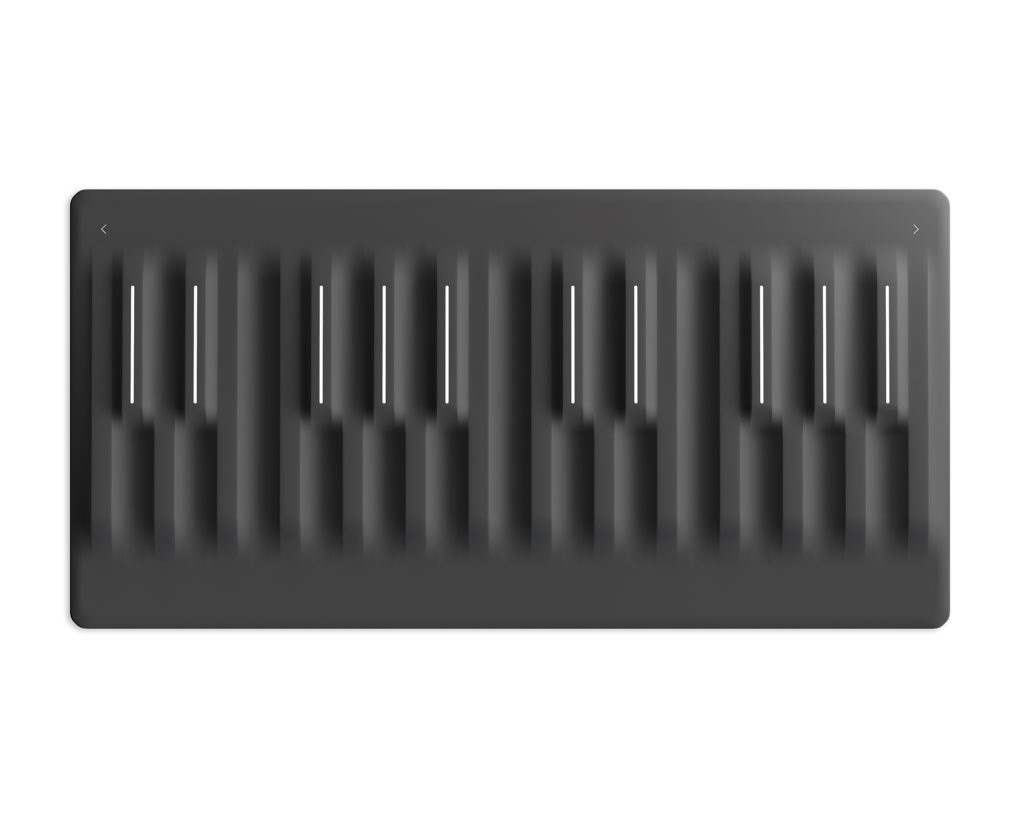 We’ll get one in to test when they ship later this month. But ROLI also promise a touch and feel similar to the RISE (if not quite as deep, since the Block is slimmer). I found the previous Blocks to be responsive, but not as expressive as the RISE – so that’s good news.

What you get is a two-octave keyboard in a small-but-playable minikey form factor, USB-C for charging and MIDI out, and connectors for snap-and-play use with other Blocks.

For those of you not familiar, the Seaboard line also include what ROLI somewhat confusingly call “5D Touch.” (“Help! I’m trapped in a tesseract and wound up in a wormhole to an evil dimension and now there’s a version of me with an agonizer telling me to pledge allegiance to the Terran Empire!”)

What this means in practical terms is, you can push your fingers into the keys and make something happen, or slide them up and down the surface of the keys and make something happen, or wiggle and bend between notes, or run your finger along a continuous touch strip below the keys and get glissandi. And that turns out to be really, really useful. Also, I can’t overstate this enough – if you have even basic keyboard skills, having a piano-style layout is enormously intuitive. (By the same token, the Linnstrument seems to make sense to people used to frets.)

Add an iPhone or iPad running iOS 9 or later, and you instantly can turn this into an instrument – no wires required. The free Noise app gives you tons of sounds to start with. That means this is probably the smallest, most satisfying jam-on-the-go instrument I can imagine – something you could fit into a purse, let alone a backpack, and use in a hotel room or on a bus without so much as a wire or power connection. (With ten hours battery life, I’m fairly certain the Seaboard Block will run out of battery later than my iPhone does).

Regular CDM readers probably will want it to do more than that for three hundred bucks. So, you do get compatibility with various other tools. Ableton Live, FXpansion Strobe2, Native Instruments Kontakt and Massive, Bitwig Studio, Apple Logic Pro (including the amazing Sculpture), Garageband, SampleModeling SWAM, and the crazy-rich Spectrasonics Omnisphere all work out of the box. 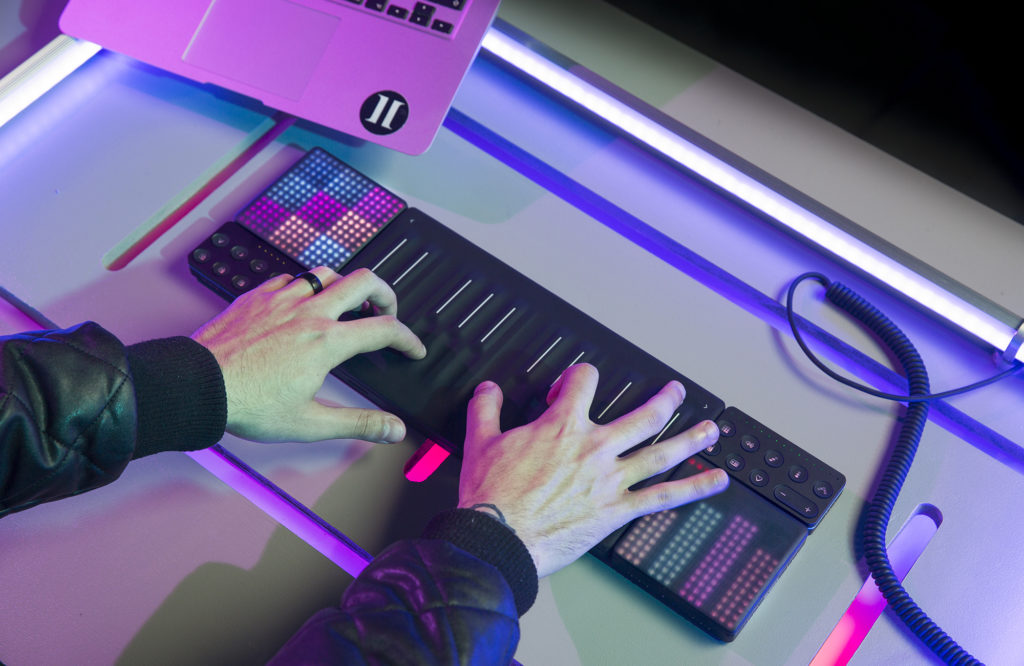 You can also develop your own tools with a rich open SDK and API. That includes some beautiful tools for Max/MSP. Not a Max owner? There’s even a free 3-month license included. (Dedicated tools for integrating the Seaboard Block are coming soon.)

The SDK actually to me makes this worth the investment – and worth the wait to see what people come up with. I’ll have a full story on the SDK soon, as I think this summer is the perfect time for it.

The Touch block, which previously seemed a bit superfluous, also now looks useful, as it gives you additional hands-on control of how the keyboard responds. That X/Y pad makes a nice combo, too. But my guess is, for most of us, you may drop those and just use the keyboard – and of course modularity allows you to do that.

ROLI aren’t without competition (somewhat amazingly, given these devices were once limited to experimental one-offs). The forthcoming JOUE, from the creator of the JazzMutant Lemur, is an inbound Kickstarter-backed product. And I have to say, it’s truly extraordinary – the touch sensitivity and precision is unmatched on the market. But there isn’t an obvious controller template or app combo to begin with, so it’s more a specialist device. The ROLI instrument works out of the box with an app, and will be in physical Apple Stores. And the ROLI has a specific, fixed playing style the JOUE doesn’t quite match. My guess is the two will be complementary, and there’s even reason for JOUE lovers to root for ROLI – because ROLI are developing the SDK, tools, instrument integration, and user base that could help other devices to succeed. (Think JOUE, Linnstrument, Madrona Labs Soundplane, not to mention the additions to the MIDI spec.)

Anyway, this is all big news – and coming on the heels of news of Ableton’s acquisition of Max/MSP, this week may prove a historical one. What was once the fringe experimentation of the academic community is making a real concerted entry into the musical mainstream. Now the only remaining question, and it’s a major one, is whether the weirdo stuff catches on. Well, you have a hand in that, too – weirdos, assemble!

Arturia AudioFuse: all the connections, none of the hidden settings