SoundCloud’s CEO published a post saying SoundCloud is here to stay and uploads are safe. But it isn’t just SoundCloud’s business that’s troubled.

Okay, first – the one thing you shouldn’t worry about is music you’ve uploaded to SoundCloud. As I wrote at the end of last week, you should worry if you have media that’s important to you that’s located in any one place without backups, SoundCloud or otherwise. But while there have been plenty of signs SoundCloud’s business is seriously troubled, that doesn’t necessarily translate to any indication you’ll lose access to the service.

SoundCloud co-founder and CEO Alex Ljung was left scrambling in the wake of deep layoffs to assuage user fears. He took to the phones with at least one celebrity user, Chance the Rapper, who reported a “fruitful” call with the exec on Twitter Friday.

Also on Friday, Ljung posted a plea on the company’s blog:

Alex also refers dismissively to “an insane amount of noise” about the company.

But let’s back up. SoundCloud’s CEO can’t just shrug off fear and uncertainty when the company’s own messaging, actions, and even financial filings are largely responsible. Whatever’s going on with SoundCloud’s business, the company has lost control of its image. It’s hard not to view this “noise” as partly SoundCloud’s fault.

Co-founders Alex and Eric are each articulate and passionate advocates of music sharing. But the company has for years failed to articulate its business model. It’s talked about subscription services like SoundCloud Go, without being clear about how it can compete with entrenched competitors, and talked about advertising without being clear about how it will attract advertisers or how those ads will be effectively delivered. It’s been evasive about details of revenue and profit. It’s allowed bad press to accumulate, like allowing lavish office photos to spread just as financial filings were adding to concerns about its future. It has often failed to go on the record with press outlets (not mine, major press), while small rumor blogs flooded the narrative with leaked (and often inaccurate) information.

To see how badly SoundCloud’s media relations are going, look to recent reports by the likes of Forbes or even TechCrunch. That’s TechCrunch, who just last year were so bullish on SoundCloud that they said the company should be worth more than Spotify

Flash-forward to last week, and TechCrunch are reporting leaked accounts from inside the company’s headquarters and
questioning whether the company will survive.

The best SoundCloud could do by way of correction or response in this place was to say that the fourth quarter begins in 80 days, not 50, and that they meant they had money through the end of that quarter (that is, the end of the year) – but that means we’re not any further along than when Ljung initially made that same statement in a financial statement in January. You can watch the messy back and forth here:
SoundCloud Responds to ‘Extensive Inaccuracies’ in Article Claiming It’s Almost Out of Money

[Indeed, TechCrunch has reason to complain here – SoundCloud doesn’t specify what it means by “extensive inaccuracies,” and actually appears to confirm some of the main gist of the article.]

Presumably these layoffs were planned for some time, so why did SoundCloud appear to be improvising its message to the press and its own staff?

And this problem isn’t a new one in summer. Way back in January, the apparent failure of revenue plans to keep pace with growing costs were fueling acquisition predictions. Now we have vague platitudes from the CEO that the company intends to remain independent, without any material on how they will do that. (That is, even after 40% staffing cuts, they’re still not talking about having money after the fourth quarter, unless by “foreseeable future” Ljung only means he can forsee 2017!) Here’s Fortune back at the end of the year; we actually know very little new information since then:
Here’s Why SoundCloud Will Likely Look to Be Acquired Soon [Fortune]

As if SoundCloud weren’t already having a bad enough week, one of their most popular mix uploads inexplicably disappeared from the site on Friday. RinseFM posted a tweet showing their account was gone, and referred to being glad to have backups, but didn’t respond when asked what had happened. (It appears their account was disabled, whether intentionally or unintentionally?) The absence of information from either SoundCloud or RinseFM is only adding to the confusion about what’s happening with the service. (For scale, RinseFM has over 100,000 followers on Twitter alone.)

Was nice while it lasted @SoundCloud. Shame to lose so many uploads, but life moves on. And having backups helps 😅 pic.twitter.com/tzQOMdFUnO

I know SoundCloud can do better, having covered the company since its 2008 founding. I know its founders can do a better job of messaging than this, too, having known them almost as long. Rather than simply imploring its users to help, they need to provide a better picture as soon as possible as to how revenue growth will work versus costs – particularly now, having cut some of the staff who were responsible for making that revenue growth happen. 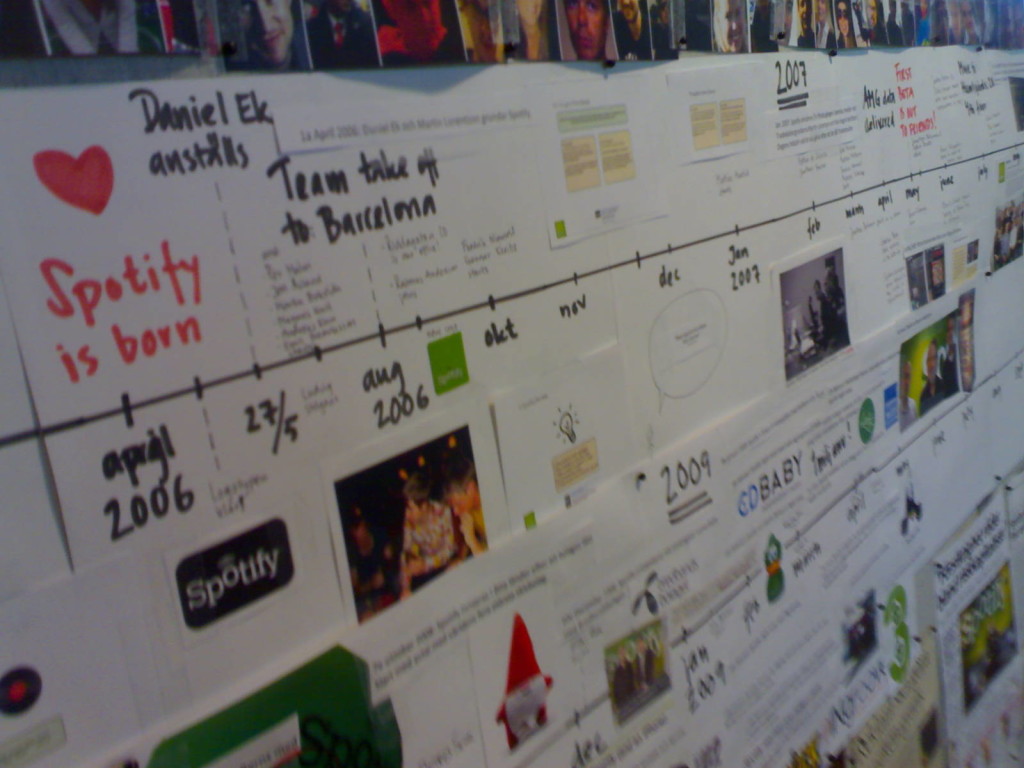 That said, I think SoundCloud are unfairly bearing the brunt of bad press and angry musicians.

Let’s not mince words: right now, the whole model of streaming appears economically broken, and surely all the major players deserve some share of the blame.

Talk about a rock and a hard place – maybe “buried under a pile of rubble” is more apt.

Content creators and owners believe they should get paid for music being streamed. So you’ve got the industry that represents them asking for higher royalty rates.

The problem is where the revenue to pay those royalties is coming from. Listeners don’t appear to want to pay much for subscription fees. That’s at least partly why Spotify and SoundCloud and others aren’t showing profitable results. Even if you don’t buy their arguments (lavish offices and huge headcount being evidence), there’s still a fundamental problem here. If users pay a flat fee for a subscription, then the company loses money the more they listen to the service – because royalty costs accrue. SoundCloud here actually has an edge, in that not all of the music uploaded requires a license – think spoken word and unreleased music. But SoundCloud hasn’t yet proven that they can make this work, either. (We’ll see if those staff cuts or other budget trimming helps.)

In fact, balancing immaterial revenue with somewhat paltry revenue fees that still manage to exceed that revenue makes the whole game feel a bit like this:

Advertising is the one thing that will grow with increased listening, at least in theory – more listening means more revenue for ads. But listeners and even content creators have been resistant to advertising. And selling ads in sufficient volume and with significant value means you need to have a talented staff able to liaise with big agencies and advertisers. Google is the one tech company who seem to have built a significant competency in the ad business, but they claim they’re not making money on ads, either.

And it gets worse. Largely missed in all the coverage of SoundCloud last week (but observed by some CDM readers), it’s really YouTube that dominates streaming. The Washington Post has just painted a bleak picture of the value of those YouTube plays to music.

In a pot-calls-kettle-black argument, YouTube weirdly warns of the dangers of consolidation in big players:

“The industry should be really, really careful because they could close their eyes and wake up with their revenue really concentrated in two, three sources,” said Lyor Cohen, YouTube’s global head of music, referring to Spotify, Apple Music and Amazon Prime Music.

Right, so it’s better if it’s concentrated in four, and the fourth is Google? Huh?

The real danger here seems to be a race to the bottom. Apple, Amazon, and Google can all afford to lose money on streaming, turning it into loss-leader business for other revenue streams. SoundCloud, Spotify, and other tech companies can afford to lose money by repeatedly turning to outside investment. (It’s absurd that we’re still calling this “runway” with those companies, as the business is now around a decade old at least. The runway metaphor only works if you take off at some point. A “hole in the ground into which you throw money” metaphor is what we seem to have here.)

I wouldn’t normally compliment the record industry, but to the credit of groups like the RIAA, at least they’re exerting some pressure up. The problem is, even a $7 royalty per 1000 streams may prove negligible to smaller artists and labels – and if the business that pays that royalty can’t survive, it’s a moot point anyway.

So, uh, how’s everyone feeling? Super… happy? No?

Of course, the buzzword that everyone seems to be running to at the moment is the blockchain – offering decentralized content and paying creators more directly. But describing one part of a larger solution isn’t the same as describing the whole solution. Will listeners embrace micropayments for music, or will they find it a hassle? What will make them migrate from services they’re already accustomed to using – and in which they’ve already assembled playlists and preferences? What about the fact that services like Apple’s are already integrated with the listening devices they own? How do you convince listeners to change their mind about what music should cost, when they’ve already grown accustomed to $10 monthly fees – or, very often, no fee whatsoever?

It isn’t all bad news. People are listening to more music. Streaming isn’t a nonexistent business – it’s US$7.7 billion in the United States alone. Someone, somewhere is actually earning money.

Also, because of the cost of PR and building fanbases, and the potential revenue earned from paying live (or selling physical goods), a lot of musicians I’ve talked to really do appreciate the promotional value of online streams. There are plenty of cases where giving away streaming music is viable – because you might then sell people vinyl, for instance.

And, look, while all of this shakes out, musicians and labels continue to pursue a strategy that caters to building relations on all these services. Some of them have great success stories with YouTube, with SoundCloud, with Spotify.

But maybe that’s the point. It seems to be the businesses in between that are non-functioning – or (in the case of futuristic blockchain propositions) just not ready for primetime.

Musicians and labels keep doing the hard work of making the music and fighting to get it heard. Yet investment and attention pours into the middleware between us and listeners – and that middleware really isn’t working terribly well.

At the very least, it seems totally valid to me that people who make music have reason to be frustrated. I think we should continue talking about our own solutions. And I’d like to see the captains of industry – music industry and tech industry alike – take some greater responsibility for what’s gone wrong and how it might go better. Well… one can dream, anyway.

Here’s how to download your own music from SoundCloud, just in case

How sound takes Lvis Mejía from Mexico to a collective unconscious