Bored with vintage-style synth hardware? How about an instrument that does the sort of audio mangling – as standalone hardware, not an iPad app?

That’s the promise of the GR-1 Granular Synthesizer, teased by Tasty Chips Electronics via Facebook and launching soon as a Kickstarter project.

In renders, at least, it looks – well, tasty. The simulated hardware as pictured by artist Marco Galtarossa looks like what would happen if the display of an iPad app or plug-in met up with conventional faders and knobs. (I always wondered if I should build some hardware around some of my Pd patches … some of them actually were arranged in this very fashion, so I can imagine this would work quite well!)

Hardware, polyphonic synthesizer with high quality (32 bit, 44.1kHz) audio
Internal and external memory (USB)
The GR-1 can be controlled via MIDI (USB/DIN) or be used standalone.
Update firmware, load samples or save (and load) patches/performances to your USB disk or internal memory.
CV and gate options to connect easily with your (eurorack) modular setup.
4 banks of 8 overwritable preset buttons, within a performance. This means you can save 32 presets, each with different samples, in a single performance. You can save as many performances as your USB disk can store. 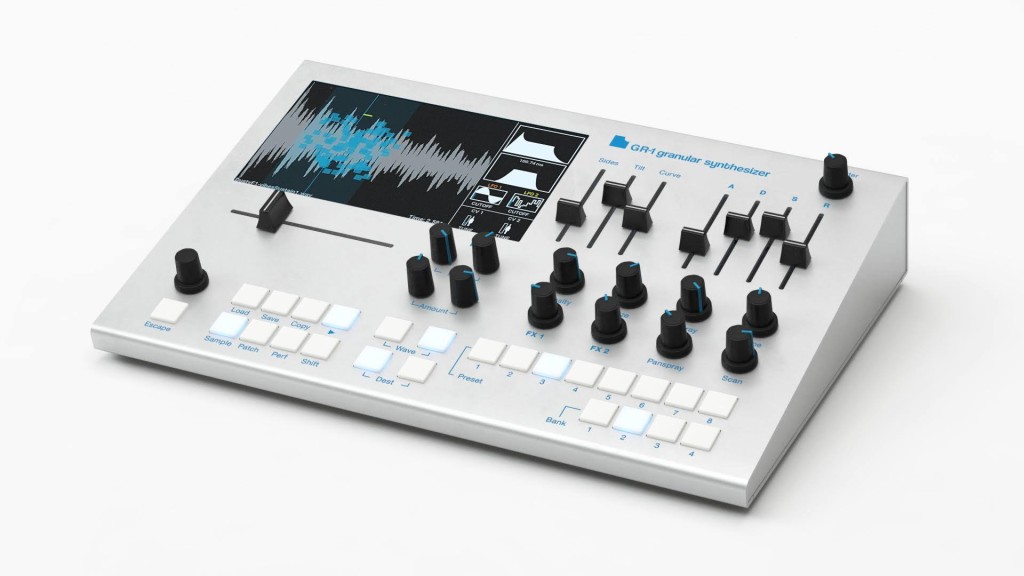 Quick push-button access to presets is especially nice, as is MIDI and CV support.

In comments, we find out the price is anticipated for backers at EUR800. That’s likely a deal-killer for some. It’s not bad on the surface of it – but then, as this is a Kickstarter project, you won’t actually get the hardware right away. And you could whip up some embedded DIY project for a fraction of that (well, if you value your own time at around zero, but then, that project might also be fun)

That said, the builder explains why the price:
“the quality of the components is high : a lot of CPU processing power, a big screen, metal pots, metal sliders, hifi dac, and hence costs us..”

Early bird pricing may be lower, too – let’s watch.

Also, this is a granular playback device more than a sampler.

Someone asked about real-time sampling, playback, and sync. They didn’t answer the sync question directly, either (which makes me think it isn’t there):

It is not in the planning. Samples can be load/imported from USB disk, there is no realtime recording on the GR-1, it does realtime sound generation and processing.

I’ll still wait and see – this could be lovely. And the response suggests just how badly people want granular features. I think this is win/win – you might happily end up with this hardware or (uh, well for me) you might be motivated to finish that DIY project you were dreaming of, the one that does exactly what you want.