If Millennial electronic music had a poster child, tchntx would be it. Self-released techno meets Uber meets social media and … oh God we’re all doomed.

“Techno Taxi” (once you add those vowels back) is the personal diary of “akaysha” (as per her Snapchat ID, anyway). If the accent didn’t clue you in, one map puts her rides outside Melbourne, somewhere around Geelong, Victoria. I have no idea how I even found this account*, but I was suddenly mesmerized. Instagramming the saga of techno “bangers” melded with failed Tinder drama, all behind the wheel of an Uber between calls, the account would probably be repulsive if it were a gimmick. But it’s not. It’s totally honest and unedited, which somehow makes the results appealing.

It’s the social media apocalypse, and it’s everything you thought it was. And it’s somehow … funny? Like if Sex in the City were documentary, not fantasy, and if it were written twenty years later, like … now.

You can just needle drop and get pure gold. This is the latest post as I write it, which features the polyamorous doctor ex nicknamed “Scrubs.” (Like I said, eat your heart out, Carrie Bradshaw.)

Back in the stu…by unpopular demand #techno #taxi #uber

It goes on like this, in a Tinder soap opera that takes place offscreen, trapped cinéma vérité-style behind the wheel of an Uber car, in the moments of life stolen by algorithms and the disruptive power of Silicon Valley’s taxi replacement.

That is, I find this poetic because I can relate. Anyone making music at this point may find themselves vying for the social media spotlight just to avoid invisibility – and from those Uber calls to SoundCloud plays, the Algorithm has us. Behind the gloss of social media success, I talk to an alarming number of techno producers who find themselves spending way too much time maintaining accounts as they pretend their careers are going better than they actually are. (I’m not being dramatic here, either – I’m super totally cereal.)

Techno Taxi just makes this self-referential and self-aware. But adding to the self-referential tragedy, then the result is kind of … an empty diversion. It’s a gimmick, but it isn’t working. (And so it tells this story even better in the process.)

On Instagram, you get the usual response and … the odd stalker response.

On SoundCloud, there are a few dozen followers. Somehow, she got into a collective, but… it seems the gig is still Uber. (Sound familiar?) 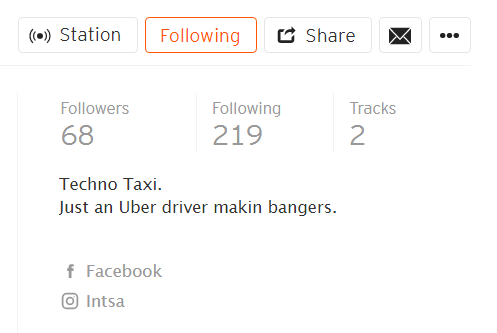 The tracks are fun, though – quirky and raw a bit like the videos. Perfect track names, oddly compelling production. “Beware” – awesome. (The mixes are dark, IDM-ish, relaxed apocalyptic lullabies, music to drive algorithmically-summoned cars to.)

I might ruin this and have it blow up, but for the record, as I’m writing this, no other press seem to have noticed.

I already had a food delivery guy give me a SoundCloud link. I’ve certainly randomly given out my own music. Maybe that’s enough. This thank-you note is nice, and I’d be happy to hitch a ride with a producer.

I can’t decide if this is a harbinger of our future, or if someday we’ll look back at Instagram, Uber, SoundCloud, and this entire piece in the way we look back on AOL, MySpace, and Napster – ancient history from the Bronze Age, less enlightened times.

But kudos to the Techno Taxi for actually just saying what’s going on. If we’re going to survive social media at all, a little honesty might be necessary – or at least might let us entertain one another when we’re bored.

The emotional reality beneath, of course, is the old story of music – full of unhappy love songs, then sung to audiences and industries incapable of loving the artist for who they are.

And the band played on.

*Update: answer to this is, well, Melbourne circles / social circles / friends in common. Facebook uses your social graph on Instagram, so because I know people who know her, she showed up on Instagram somehow. See also her “ok sure whatever” project, which does have more likes behind it, plus the coveted “verified” status (which I couldn’t get – don’t you know who I am, Facebook?!):

And in fact meanwhile, she’s got a load of accolades to her name, as a DJ and remix producer. Plus a team of people did “SEO” for that site. And… yeah, okay, well, now techno taxi it is. More unintentional poetry from that site: “Add Ok Sure to your Spotify Playlist now pitched by PlayList Pump on behalf of Upside Music.”

I feel like I wouldn’t hire those people for some reason. But her music’s cool.

What you need to know about the Roland Boutique 101, 808 reboots