Zoom figures out mixer + interface + recorder is exactly what we want

Let’s skip the specs and get straight to the point: this should be a product category. Zoom’s new box is a mixer, audio interface, effects, and audio recorder in one.

And that’s significant, because across genres from electronic to traditional instrumental, people need to do all these things. You need to mix signals. (Now, even electronic musicians are fairly loathe to play with just a laptop and nothing else.) But you also might need to connect a computer. But you might want the mixer to still be a mixer when the computer isn’t there.

And then, above all else, you need to be able to record the damned gig. You know, like, just in case you don’t totally suck.* 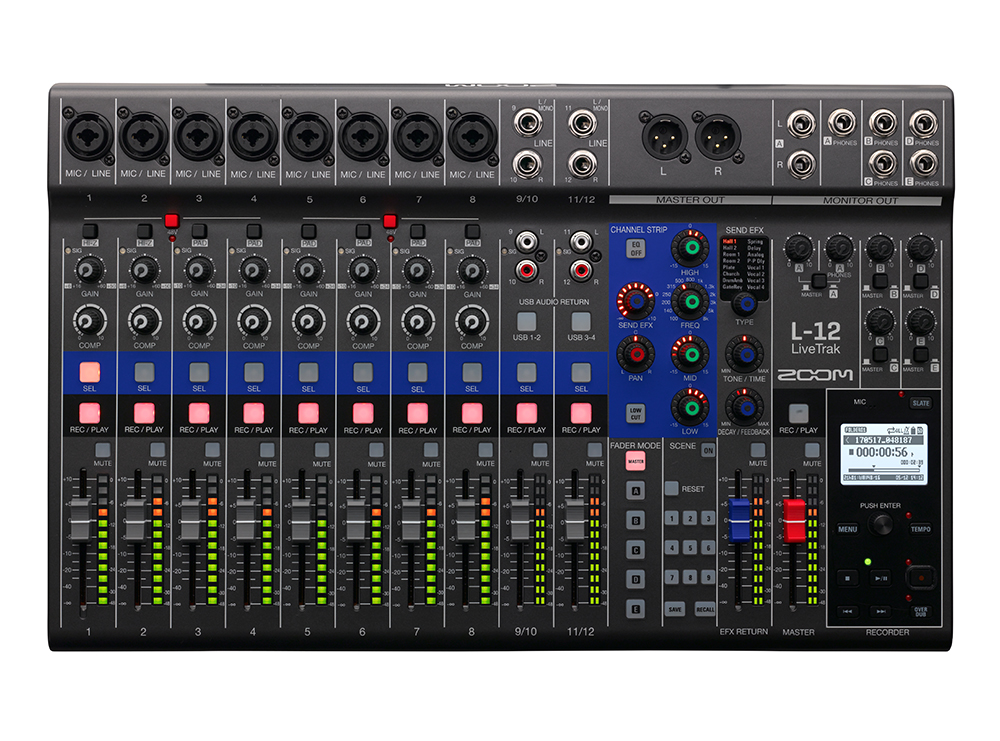 And that’s what this is.

It’s a mixer. that can record up to 14 tracks at once, or play 12 tracks at once. (The first two channels are Hi-Z for an instrument, and 1-8 offer 48V phantom power for power.) It’s about as small as it can be but still has full-size connections and actual faders.

It’s a headphone monitor with five outs with mixes you can customize and save.

It’s a click track source with a metronome built in.

It’s an audio interface when your computer or tablet or whatever is there. No drivers needed, so it works with iOS, Raspberry Pi, whatever. Four outs, so you can do 4-channel mixes or a separate monitor mix and stereo to the PA. It works as an A-D converter, too, with latency adjustments.

It’s a recorder. Automatic start/stop. Load projects via USB, or just take the SD slot out. Connect a footswitch if you want to start recording that way.

And it’s got compression and effects. Built-in compression control for 1-8. (Zoom’s compression used to be awful on its early recorders; they’ve fixed that.) And there’s delay and reverb.

I’ll probably get one. And kudos to Zoom, too, for their video recorders, which similarly understand life for the musician in the age of the Internet.

But if competitors are smart, they’ll get on this category, too. Because I believe it really will be a category. (A 6-channel version of this that fits in a backpack would also be lovely.)

* Actually, I’ve some bad news for you: probably now that you have the recorder with you at all times, you will suck all the time. Seriously. The thing that made those live gigs so great was the fact that some idiot didn’t understand how to use your recorder, or you forgot the batteries, or you didn’t have the right adapter cable.

Then again, be positive. Probably, one day when you least expect it, you will play once more at that level of genius, spontaneity, and innovation, right before you accidentally drop the SD card from LiveTrak L-12 in a river full of piranhas.

There you have it: the LiveTrack L-12. Gee, why don’t manufacturers let me write their ad copy for them?

Okay, if you don’t mind carrying your own recorder, there are now many mixers with built in audio interfaces. But probably the nearest rival to this comes from PreSonus. It doesn’t have the track count of the Zoom, or the band-oriented separate headphone outs and various extras. On the other hand, it’s more compact and has the dedicated sends this is missing.

Maybe you’re happy using some other solutions, too. Let us know in comments.

Export to hardware, virtual pedals – this could be the future of effects