If the last generation of production software was about UI, workflow, and add-on extras, the next generation may be about science. Witness MOTU’s DP 9.5.

DP, aka Digital Performer, is that DAW everyone forgets about, but really shouldn’t. Now on both Windows and Mac, and a long-time staple of hard-core niches like the TV scoring business, DP has quietly added all the stuff that makes using a DAW better, without too much extra stuffing, often advancing without any hype past other rivals in key areas.

But even doing that, it’s hard for a DAW to stand out.

So, how about this: how about if a DAW let you manipulate time and pitch in a way that sounded less artificial? Wouldn’t that be a reason to use it?

And while various DAWs have licensed technology for improving time and pitch stretching, most of them still sound, well, pretty crap – especially if you go beyond small changes. (That hasn’t stopped me from using the artifacts creatively, but then the problem is, even those results tend to sound too much alike.)

So, the pairing of Zynaptiq with MOTU gets pretty interesting. 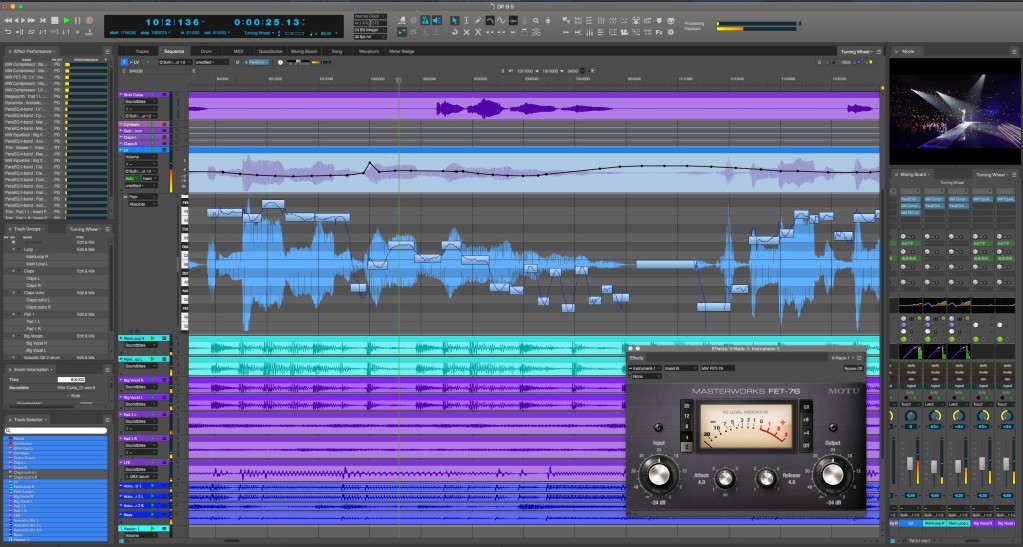 Zynaptiq is one of a handful of developers working on brain-bending DSP science to achieve sonic effects you haven’t heard before. (For some reason, a lot of these players seem to be in Germany … or Cambridge, Massachusetts. The latter is an MIT thing; the former, a German thing? Zynaptiq is out of Hannover.)

In the case of Zynaptiq, “artificial intelligence” and machine learning meet new advances in DSP. Whatever’s going on there (and I hope to cover that more), the results sound really extraordinary. Every time I’ve been at a trade show where the developer was exhibiting, people would grab you by the arms and say, have you heard the crazy stuff they’re doing it sounds like the future. That was aided by a unique demo style.

But there’s a big leap when you can integrate that kind of capability into a DAW and its existing workflow, without all the weird extra steps required to go back and forth to a plug-in.

And that’s what DP 9.5 does – in an update that’s free for all existing users, adding Zynaptiq’s ZTX PRO tech.

You get time stretching everywhere, so speeding up and slowing down by small increments or huge sounds natural. And they’ve done a bunch of work so you can change tempo adjustments and conductor tempo maps – which was always, always one of the best features of DP. (I was at the Aspen Music Festival in the late 90s listening to a film composer show off how easy scoring with DP markers was, fully two decades ago. Two decades later, the competition still hasn’t caught up, and DP has continued to expand on that feature.)

Plus you get pitch shifting and relative pitch editing, as you’ve seen with products like Celemony, but far more deeply integrated in the DAW and with (to my ear) better-sounding results. So yes, that does pitch shifting and pitch correction, but it also opens up some really interesting creative possibilities. This isn’t just about making bad singers sound better; it could be a boon to creative editing. (I just spent the last weekend poking around in Logic’s archaic and dated implementation for the heck of it, not knowing DP 9.5 was coming and… well, just no.)

There are “quality” presets, too, to help you find the right settings.

Have a listen in the demos. Here’s pitch shifting:

And from the ever-lovely Gotye (really nice chap with a terrifically nice band and some great producers, I have to say, just because I like nice people), some other examples:

Unrelated to all this, 9.5 also has a window that makes it easier to monitor processing load, so you can identify CPU hogs. (Heck, that may mean DP is now part of my standard test suite for plug-ins.) This combines with other unique performance management features in DP, like “pre-gen” capability, which eases the load on your CPU by pre-rendering audio.

Here’s how MeeBlip can get you started with hardware synths

Listen to a mix of music that’s techno, but not four on the floor