You can tote a USB stick and plug into CDJ decks, yes. And now, if the club starts buying Pioneer samplers, you can do the same with sample sets.

Pioneer made a CDJ-shaped sampler – what does that mean for DJs?

And the software that makes it all happen … is …

Not really very exciting. But let’s have a look anyway, just so we understand the process. 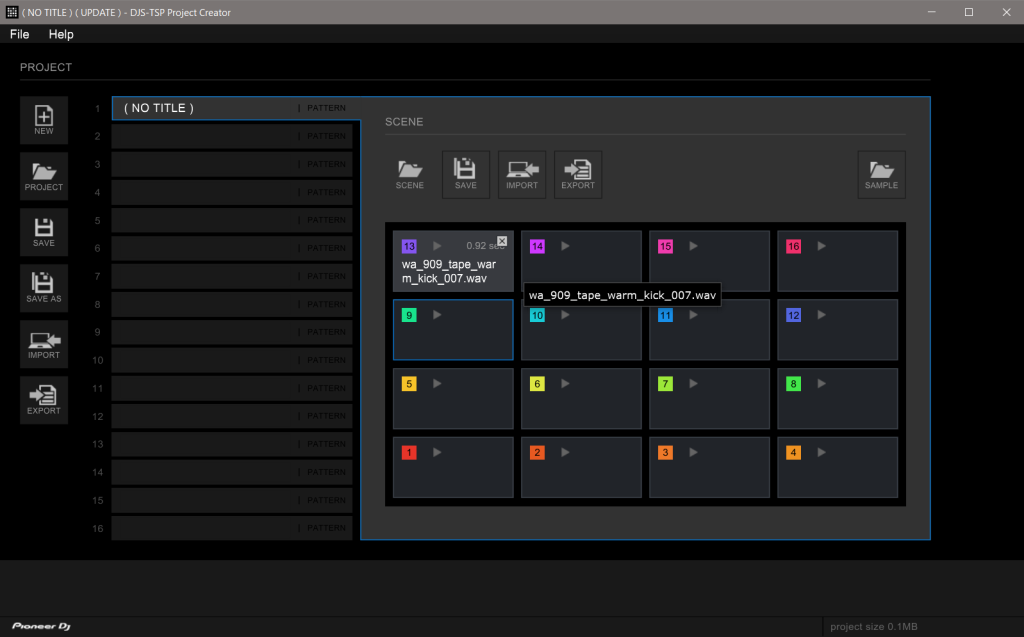 Basically, Pioneer’s DJS-TSP Project Creator – named in the way only a Japanese music gear maker would – gives you a picture of the layout of the new Pioneer samplers, and the ability to manage projects and samples.

So, even if you don’t own a DJS-1000 or the previous TORAIZ SP-16, you can sit with this thing and load up some custom samples, then bring a USB stick with you to a studio or club that does have the sampler. You can load and offload projects, load and offload individual samples (though sample file format is restricted to what the hardware supports), and you can name scenes and clips.

Of course, that’s fine. This is a librarian for samples, essentially. Though it’d be nice to make other edits to sample settings without the hardware.

That may make this headline seem, well, like an overreaction:
Ableton and Native Instruments should worry about the DJS-1000

Well, okay, I wanted “maybe a little bit worried” to be the headline, but it didn’t fit.

While this particular editing software is nothing glamorous, though, I think Ableton, NI, and others ought at least to pay attention. Remember that Rekordbox had similar, humble beginnings – before it blew into its own Traktor-style DJ software and took over the world. Pioneer could consider making standalone software that does the actual sampling and editing, perhaps on desktop and mobile, that then can act as a satellite to the hardware samplers.

The point stands, though. Clubs that have this gear installed may be less amenable to complicated live or live/hybrid rigs. USB sticks are really, really convenient. And the competition for computer/software combos is increasingly standalone hardware – whether that’s Pioneer, Elektron, Akai, or something else entirely. The lines are blurred enough that computer-tethered tools need at least to hold their own as a value proposition.

A few minutes mucking around with this may remind you that, heck yeah, the computer tools may still be better. Or you can look at something like Akai’s MPC line – we’ll be hands on with the latest version of that soon. It behaves like computer software, and even works with a computer, but also works untethered like standalone hardware – without sacrificing computer software flexibility.

I do think that we’re starting to see the tools and workflow change for live, though. Time will tell. Until then – download the manual and software here:

Pharrell Williams will take a leadership position at ROLI