By analyzing different sonic qualities of a sound and then modulating the results, Zip has a new take on the familiar compressor/expander..

What do you do when all the basic categories of signal processors have been done? Well, you invent new ones, of course.

So, normally we think of a compressor/expander as taking amplitude as input, and processing the result from that. And we assume if there’s any modulation, it’s got fixed routings. Zip turns that on its head, with multiple ways of analyzing incoming signal (not just amplitude), and then an open system for adding modulation of its various parameters. 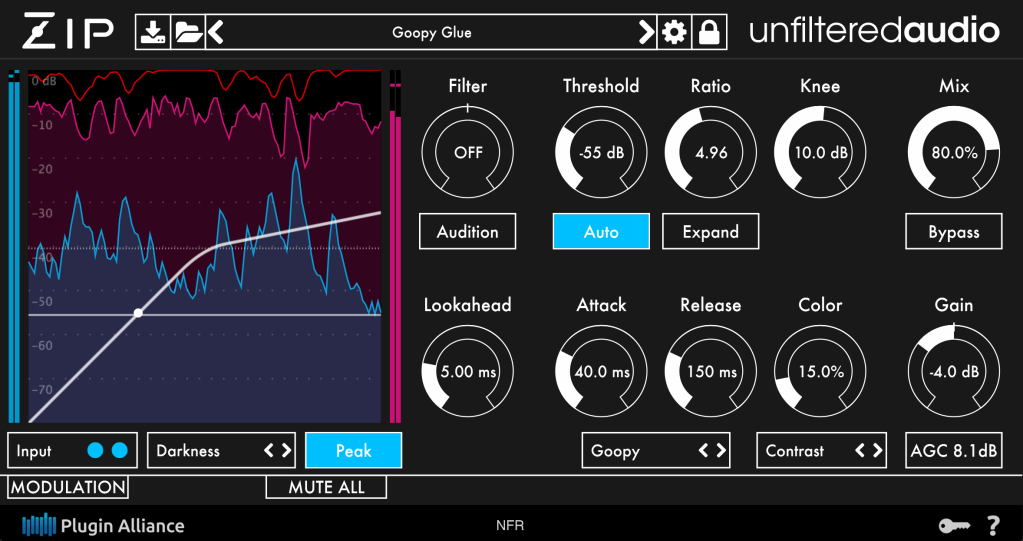 Zip isn’t alone. I’d say we’re seeing a whole new direction in plug-ins that’s moving this direction – performing more intelligent digital analyses on sounds, using everything from new DSP to new machine learning techniques, in order to twist around existing signal processing metaphors. It’s a big break from what has been an ongoing avalanche of software that emulates traditional hardware – this is stuff that just wasn’t possible before the computer (or indeed wasn’t available to us unwashed masses until recently).

In the case of Zip, some time playing around with it already has me understanding that I might not apply this compressor/expander the way I would a conventional model. It starts to become a creative tool rather than just a utility – and more ripe for abuse. (Go ahead; turn it up all the way, set the settings wrong, start patching in modulation without a particular plan … you can’t really break anything. Yeah, there’s even a randomize button.)

Even in a fairly compact interface, you’ve really got a multi-effects plug-in as much as a unitasker tool. But it doesn’t feel tacked on – it’s all built around the compressor/expander paradigm. Pushed to the extreme, this thing is gritty and digital – but that’s not necessarily a bad thing, and subtler effects are possible. 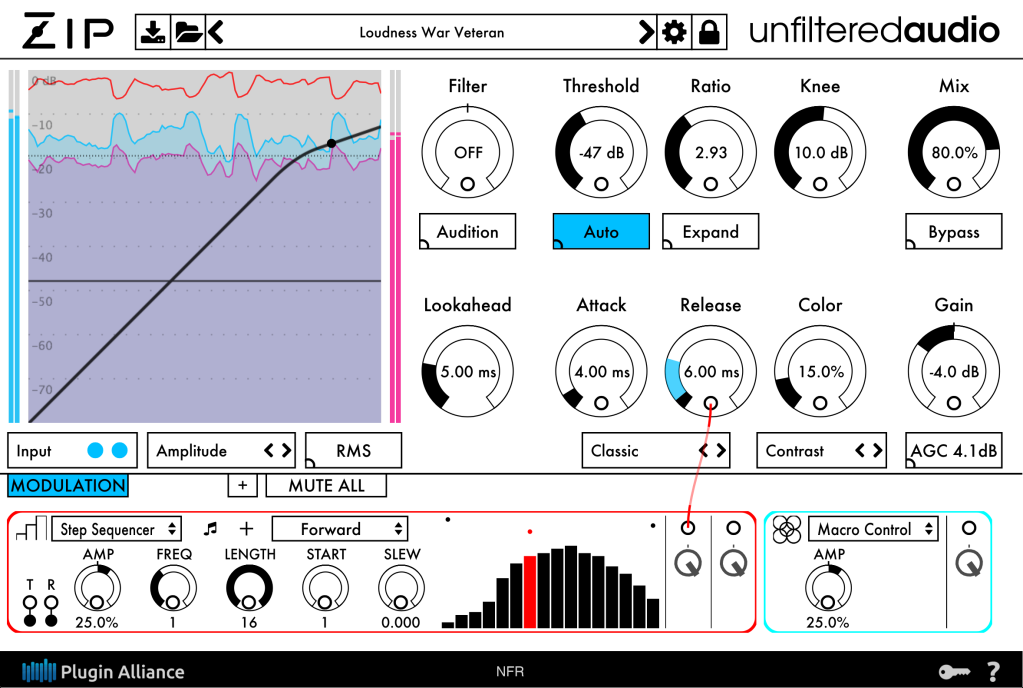 Patchable modulation at bottom, and the light skin. (The interface is scalable – all those settings are hidden behind the gear menu at top.)

To break it down, we can think input to output:

Yes, it’s a compressor/expander. This goes without saying, but having a conventional centerpiece to all these extra goodies helps ground them. There are also four different envelope flavors, which in fact are fairly subtle and let you tune the results to your liking. (The names – Classic, Goopy, Quick, and Extreme – sound a little more radical than they are; think of these more as getting your timing settings just right.)

Patchable modulation: This is really lovely, a signature Unfiltered feature – you can drag patch cords from modulators to wherever you like. That includes:

Internal effects: Saturation, bitcrusher, and filters are all built in, as well – and combined with the modulation above, get really powerful.

I’m just wrapping my head around this having had a few days to play with it – partly because the relatively conventional applications are already more flexible. But I like the creative depth here. The developers send along the following ideas. I think the ability to modulate anything, and to always have access to envelope follower and dynamic settings, is really the key:

Turned a boring bass synth into a rhythmic and punchy sequence by using the modulation system with the onboard bit crusher for some tasty grit.

Use an LFO to modulate the Threshold on a vocal to add rhythmic effect, letting the lyrics duck in time with the rest of the track.

Patch Zip’s LFOs to the Color knob to create tempo-synched filter sweeps and pulsating distortion on guitar and keyboard tracks. Zip sculpts both dynamics and tone.

Here’s me wandering around the basics of the interface – actually, these fairly vanilla effects I already found really useful.

To be honest, it’s cool enough that it makes me both want to use it more and to try some new ideas in my own (bodged-together) DIY efforts.

And the developers made their own hands-on showing how you can sculpt sounds with this:

More details – though the quick way to say this would be, you always have control over the sound and visual feedback on what you’re doing at each stage:

Internal and external sidechains are equipped with High Pass and Low Pass filters and an Audition button for hearing the signal the detector acts on.

Get it at Plugin Alliance:

Ivy is an epic 240-step hardware sequencer as sound installation