Smartphones have already changed how we think about cameras. So what about recording? The newest handheld in Roland’s popular line has one answer to that.

The R-07 is a handheld recording gadget, in the tradition of Roland (and Edirol) recorders past. That already suggests it could be a good choice. This year’s model has various high-quality modes and stereo recording, including built-in stereo operation.

Now, that already can best the internal mono mics in your smartphone. Plus, add-on mics are kind of a pain – they require different connectors, may make you worry about battery life, and then require you to position your phone in the recording location. Plus, phones generally speaking lack tripod mounts (even if there are some solutions to that). 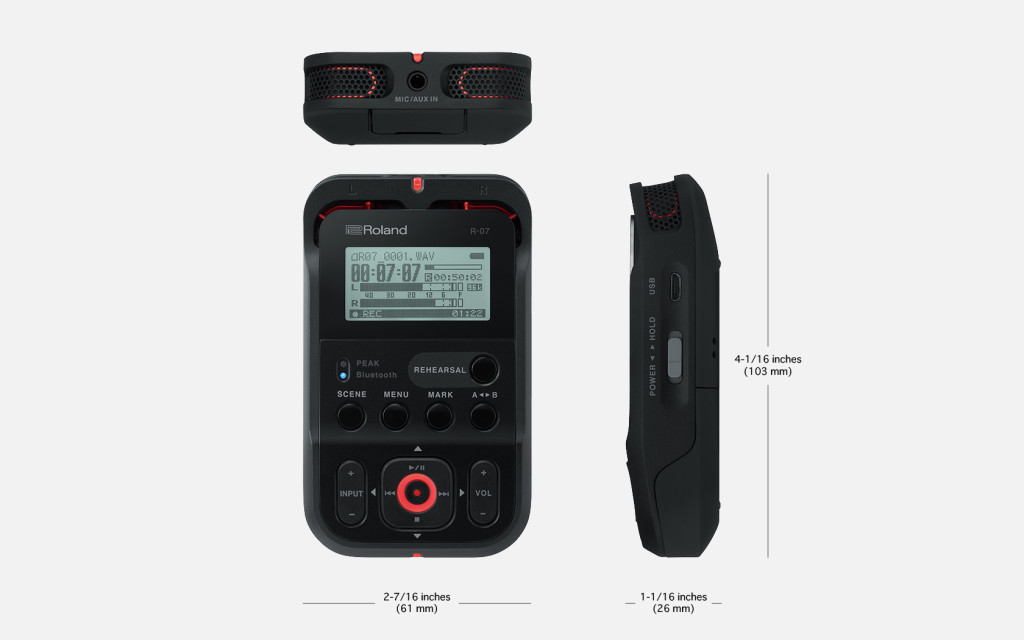 So the R-07’s innovation is to both respond to the sleek, small design of modern phones, and to couple with your iPhone or Android phone for added functionality.

This doesn’t look quite like any handheld recorder we’ve seen yet from Roland or anyone else. It’s incredibly tiny, with a sleek design that seems more consumer gadget and less chunky pro audio device. It still manages to include one-touch access to important features, plus USB connectivity, audio jacks, and a built-in stereo mic. But it does so in a pocket form factor. 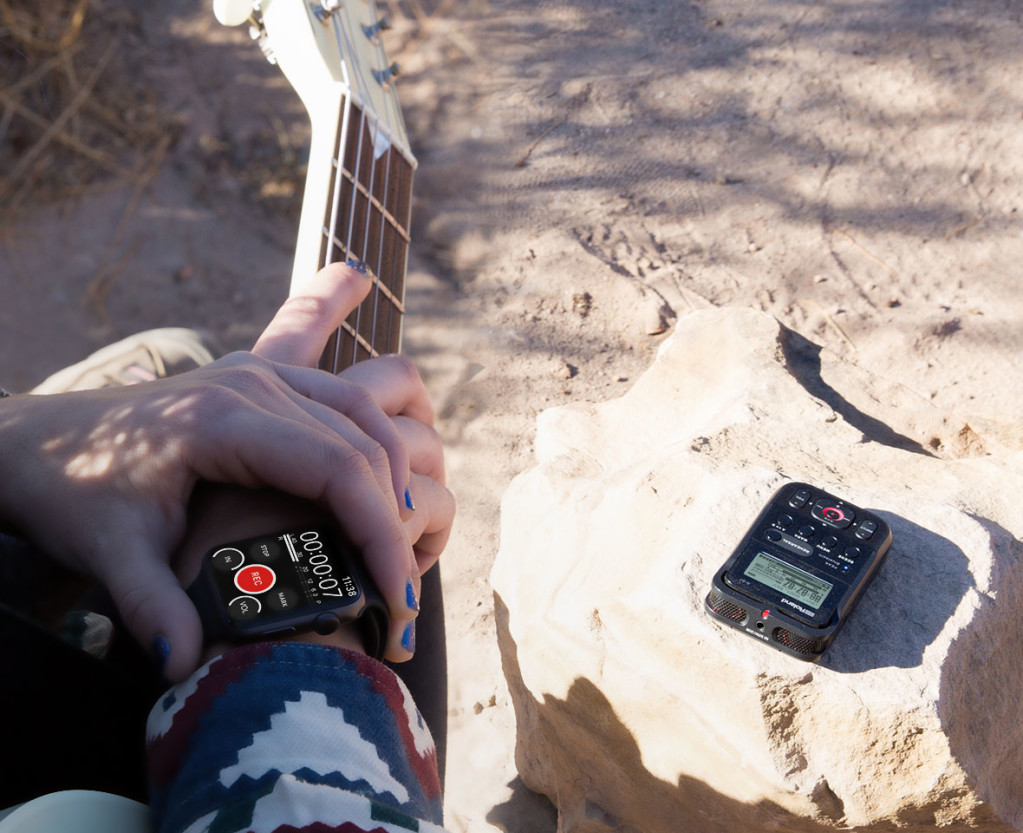 Work with the R-07 and your smartphone (hey, trousers have two pockets for a reason?), and the device expands in power. First, there’s remote control functionality. You can stick the R-07 where you want it to go – especially important if you’re using that built-in mic – then record and play and manage recordings and set levels wirelessly, over Bluetooth. (They’ve even got a nifty Apple Watch app.)

The R-07 can also stream audio from the record to your phone, via Bluetooth. And refreshed technology can mean the fidelity of that is higher than you might expect. That’s thanks to new tech from chipset maker Qualcomm called aptX. Basically, it’s a higher-quality codec optimized for improving sound quality while simultaneously improving low-latency reliability. There’s a good writeup on Android Authority covering both aptX and aptX HD variants. (iPhones don’t support aptX natively, but some dongles do; I don’t know yet if the R-07 will be compatible with those.)

You can also use Bluetooth to monitor your R-07 with Bluetooth wireless headphones – and again, if those headphones support aptX, you’ll get higher-quality, lower-latency sound. (Now we’re beginning to see some added tax to living in the Apple ecosystem, since it seems Apple is going their own way with this.)

Apart from the phone features, the R-07 looks like a darned cute little pocket recorder – like one that would actually fit in your pocket. It also solves a really big problem that may be more important than wireless operation or how it works with your phone, and that’s that it has some features to prevent you accidentally recording at a volume that’s too high.

Each time you record, the R-07 actually makes not one but two recordings – one at full level, and one at a lower level. So when the full-level recording clips, you can go back to the lower-level recording that has more headroom – even just for the portion that clips. If you’d prefer this process to be automatic, something called Hybrid Limiting automatically splices in the lower-level bits you need. Neat. I’m curious to try this in practice.

(This is hardly a pro or consumer issue. For instance, I was once in a taxi racing to the Philadelphia airport and learned my taxi driver was frustrated with Zoom’s recorders because he kept clipping his recordings when he was playing drums with a heavy metal band. This is probably potentially relevant to half the world’s population. There you go. And obviously, pros and consumers have all screwed this up at one time or another.)

The R-07 can make two simultaneous recordings—one at full level and another at a lower level with increased headroom. If there’s unexpected clipping in the main recording, you can replace that section with a portion of the lower-level backup recording. Hybrid Limiting can even handle this automatically, so you get all the safety of limiting with none of the downsides. 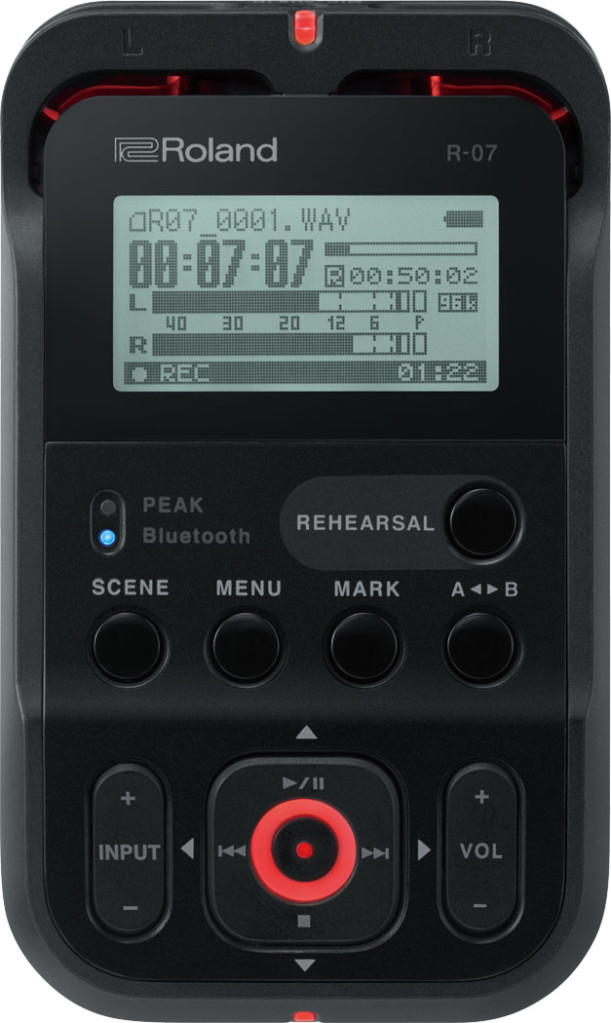 Stereo WAV recording, up to 24-bit/96 kHz
MP3 recording, up to 320 kbps
Included stereo mics
One-touch access to scene setups (oh, lord, having done a lot of menu diving on Zoom devices, this is welcome)
microSD slot
USB connectivity, with USB class compatibility (so you can mount it on any computer, mobile device)
Jacks: headphone out, mic/line in (that’s a stereo minijack – it disables use of the mic, but it means you can use the R-07 for external line recordings, like from a mixer in a show)
Powered by two AA batteries or USB bus power
Black, white, or red, optional bags available

With the splashy marketing materials and a launch this week at the Consumer Electronic Show, it’s clear Roland hopes this recorder will reach out to a wide, wide audience. Hope we get to try one.

The competition: Roland, TASCAM, Sony, and Zoom have been duking it out in this category for some years now. In the handheld space, look for the updated Zoom H1n as the rival here. That should be some nice competition. (And to my gripes about Zoom and menu diving — don’t get me wrong, Zoom has gradually been working on that. I’d love to put them side by side and test usability, too, as well as of course mic capsule quality and noise and other performance issues.)

My current rig includes both the Zoom H4n and Zoom iQ6 for iOS to attach to my iPhone. Curious to see how this stacks up.

CDM Mixes: Voyage into sound like a mystic space cat, with akkamiau