Arturia AudioFuse Review: the tiny square that packs nearly everything

There are some exceptional audio interfaces out there. But Arturia stands out by cramming an unusual amount of connectivity in an ultra-mobile package.

Look, when it comes to audio interfaces, compromise is the name of the game. The interface either never has every single port you want, or … it does, but it’s big. And computer operating systems remain an obstacle – especially once you’re beyond what theoretically should work, and into the realm of now something is popping and I better turn up the buffer size. Some of this is in the hands of manufacturers; some is decidedly not. (Computer and OS makers, I’m looking at you. Yes, you. Music – it’s kind of important to human civilization. Check it out some time.)

What’s impressive about Arturia’s AudioFuse is that they seem to have taken to heart a lot of the wishes of the mobile musician – and actually delivered.

I’ve had my hands on the AudioFuse for some time now, long enough to torture test it with both my Mac and PC in a variety of live and studio conditions. And I can share what I’ve been sharing with friends about it – this is easily on my short list of easy-to-recommend audio interfaces. (More on the others at the end.)

What the AudioFuse manages to pull off, and this isn’t easy, is maximizing flexibility in a variety of situations while still fitting into an enclosure small enough that you may always keep it in your backpack. 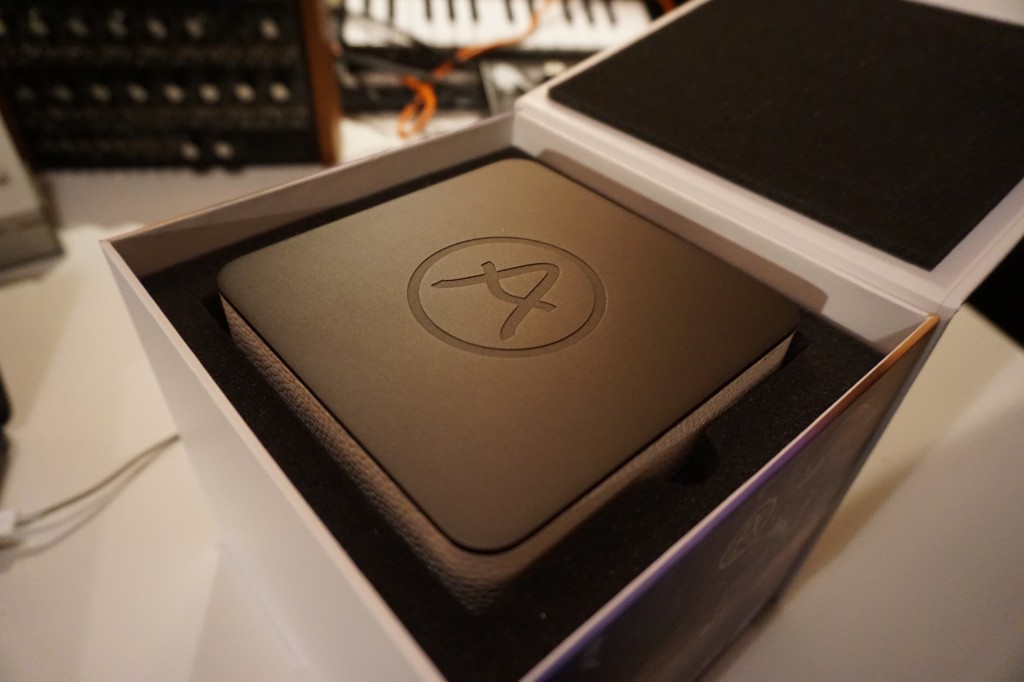 First, one feature that makes the AudioFuse essential to keep around is, it’s USB 2.0 class-compliant, driver free. With this amount of I/O, USB 2.0 makes this box far more flexible and compatible. Officially, that means Mac and Windows support that’s plug-and-play. But unofficially, that means Linux, Raspberry Pi, iOS, and Android, too.

You will need Mac or Windows to run the AudioFuse Control Center for additional configuration options. But I’ve happily dual-booted to Linux on my PC and gotten great results from the box. And there’s enough onboard control that I didn’t feel stranded without the software control panel, even though it’s useful in some situations. Meanwhile, the AudioFuse remembers all of its settings after you disconnect from the control panel.

You mileage may vary, but I got extremely reliable results with a 64 sample buffer size, which means well under 10 ms latency, on Mac, Windows, and Linux with a variety of tools. Remember that with latency the point isn’t just paper specs or whether the audio interface can run with a small buffer size; it’s whether you consistently remain without pops at that small buffer size. For me, the Arturia out-performed a number of USB devices laying around my studio.

If you have a single OS environment, and you don’t mind installing drivers, you may well best the AudioFuse’s performance. And I would consider Thunderbolt/USB3 if you want to use more I/O than the AudioFuse has onboard. But I find there’s some comfort in knowing I’m traveling with an interface I can plug into a different computer without worrying about driver installation, and I like owning at least one box like the AudioFuse that can work outside just Mac and Windows. 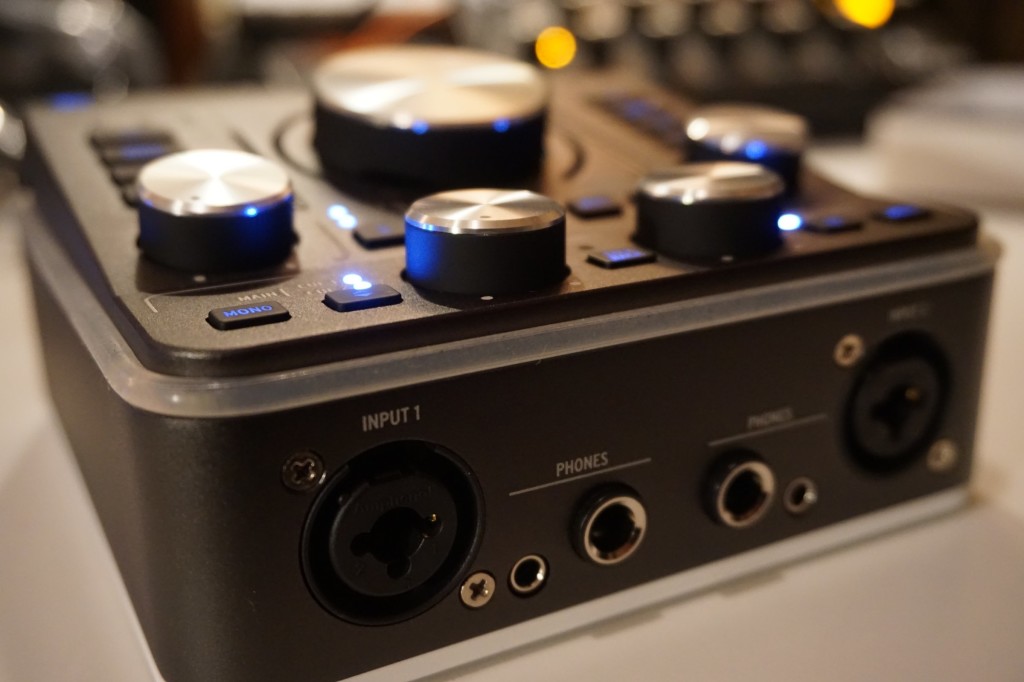 Wow, did someone hear or intuit what I wanted in I/O (with one caveat below): 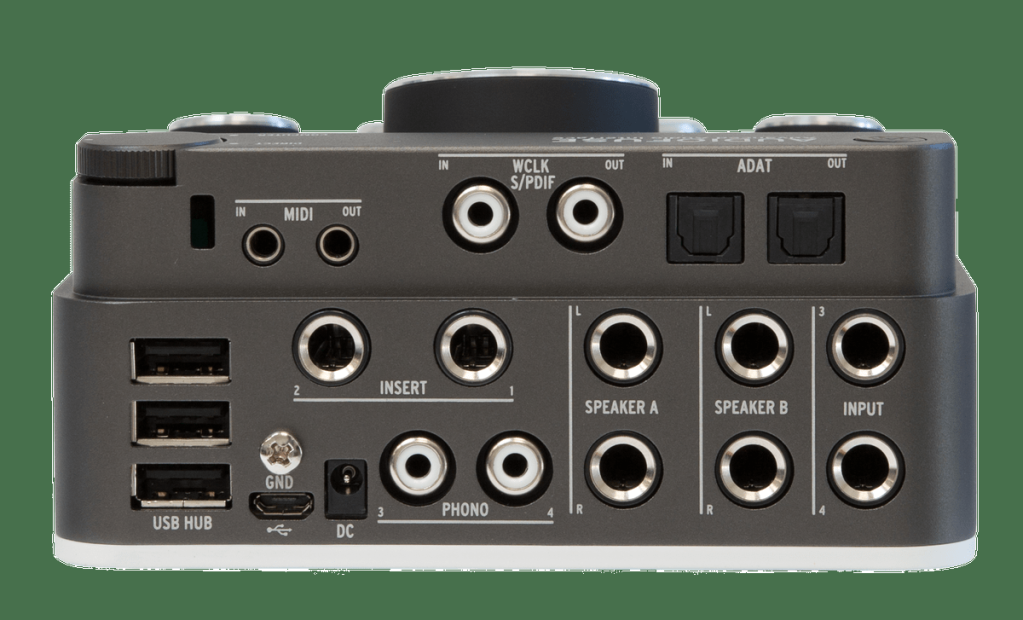 Including MIDI, the USB hub, and separate headphone jacks alone makes this a huge boon to the mobile musician. And everything works as advertised – plus it all runs via bus power if you like (adjusting automatically to allow it to do so). A bit on the power modes:

USB is via micro USB. That may sound fidgety, but structurally I’ve found these to be sound. The included cable has a second USB connection, but if you lose your cable, you can swap a phone cable – also critical, because it means again the interface will still function when you’re on the road and misplaced a cable or someone lifted it from you. Uh… not that those things ever happen.

Arturia advertises their own, built-from-scratch mic pres. They certainly sounded transparent to me, and I appreciate that they get their own signal path. And you’ve got onboard 48V phantom power plus a multi-level pad and auto-impedance matching. Basically, you can more or less plug anything into this and forget about it. 24-bit 192kHz may sound like overkill, but then – quite literally, friends and I have lately got interested in recording ultrasonic birdsong and bat noises, so there’s that.

There are also unique monitoring settings, like handy summing to mono. (Having once had my trusty mastering engineer yell at me when I accidentally sent something that had phase cancellation problems, thanks for this!)

The one thing I’m missing here is more than four outputs. With some serious multichannel output situations becoming more commonplace, that means the AudioFuse isn’t quite the last interface I’d ever need to own. (Someone somewhere is saying the same about the inputs.) But let’s not consider the fact that the whole thing is a tiny square. Speaking of which: 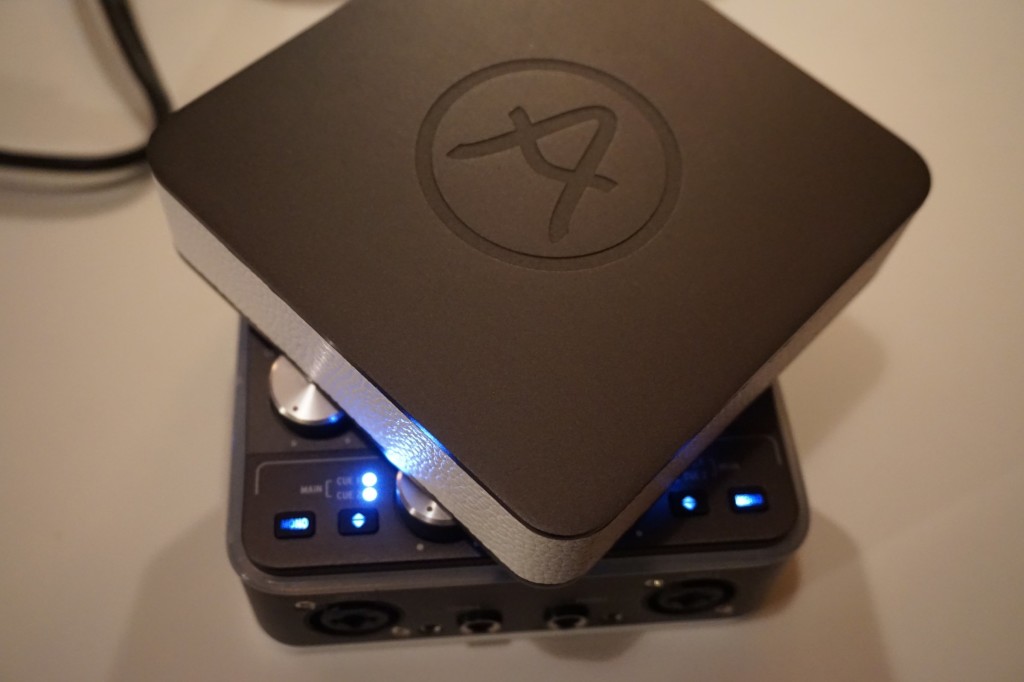 Arturia really nailed it here. This is the one audio interface with a decent selection of I/O I can comfortably drop in a backpack or suitcase without worry, thanks to its small size, low weight, and a cute and indispensable cover. That’s not just for looks – a lot of audio interfaces have some dangerously exposed controls. (It does look nice, too, of course.)

I’m also a fan of the top panel. There’s a big knob, certainly reminiscent of interfaces from Universal Audio and others, plus dedicated meters for input and output and gain and phone knobs, plus shortcut keys and a cleverly-positioned dial for adjusting whether you monitor from the computer source or direct through the interface.

Arturia were clearly inspired by Universal Audio both in those dials and the displays. (Not to be outdone, UA also have a slick new box called the Arrow. Upside: Thunderbolt, DSP processing. Downside: far less connectivity.) 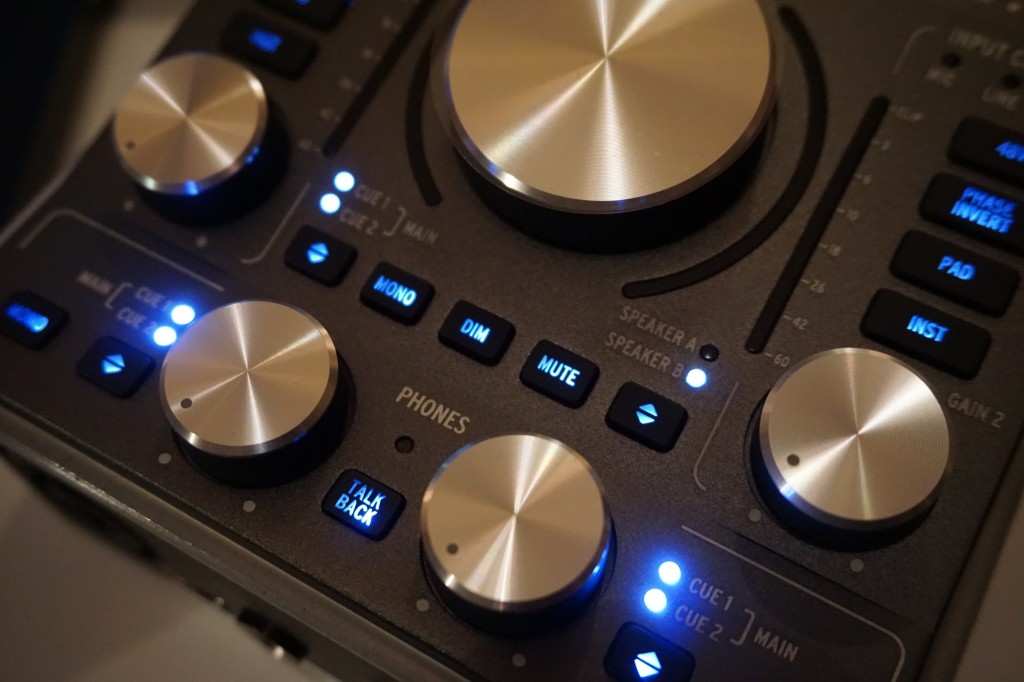 Here, I’ll link directly to Sound on Sound and say everything Sam says about monitoring is absolutely true. (Sam, I’m not cribbing your review notes – I just definitely can say I can directly count myself with the opposite use case!)

I can be even less diplomatic than Sam and say, if you want an audio interface that doubles as a (sub)mixer, or if you want particular control over what goes to the monitor mix, forget the AudioFuse and go with something else.

If you just want to quickly plug in some inputs and then reach one dial that’s either the computer or whatever input you’ve got, the AudioFuse makes sense. That is, if you literally aren’t thinking about what’s plugged in – and quite often in the heat of the moment onstage or on the road recording, you really aren’t – it’s great. Monitoring, like connectivity, are about instant plug and play. I don’t think there’s a right or wrong answer to that; I’d say what this box does is suit this particular use case. 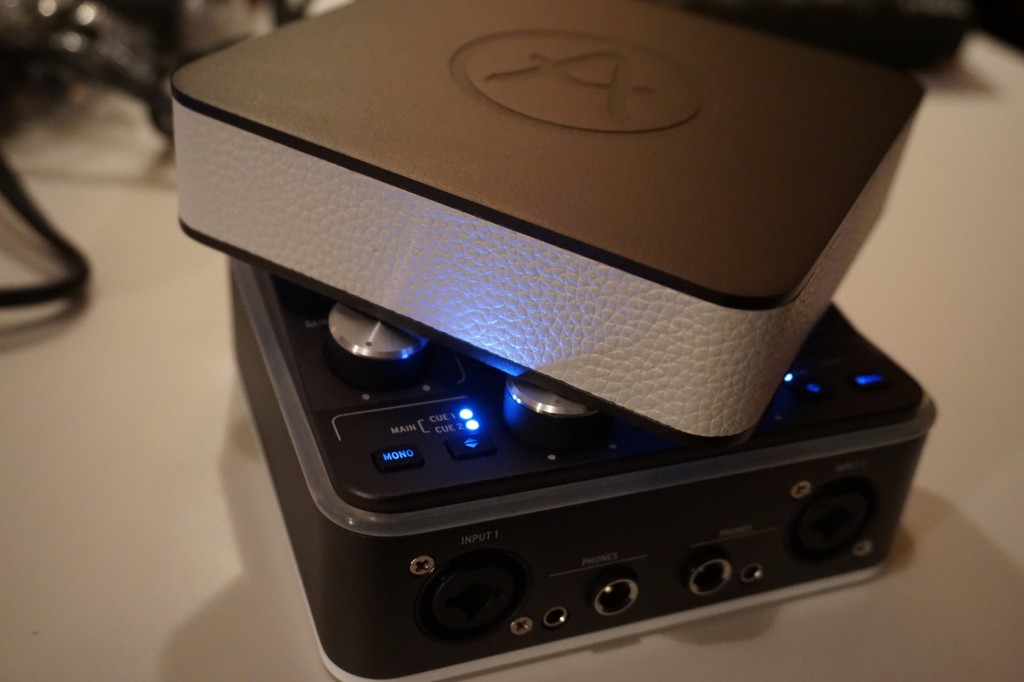 As a versatile all-around mobile interface, I love the AudioFuse. I’d still choose the Universal Audio Apollo Twin for audio quality, and the ability to add processing via UA’s effects without adding round-trip latency through the computer. I’d consider MOTU and RME for adding more I/O, too (especially if you don’t need or want the UAD effects), and certainly MOTU for its unique AV applications and mixer operation. Thunderbolt really does look like the future for more advanced applications.

MOTU is worth an additional mention for being universally compatible with their 828es, which has both Thunderbolt and USB. And that’s the box you want if you find the AudioFuse appealing but want more I/O and real standalone mixing operation, plus better performance.

But that also slightly misses the point. You wouldn’t throw an 828es into a backpack and take it with you everywhere. The AudioFuse, you would. And all musicians don’t always travel with road cases.

And that’s why one size doesn’t really fit all. But for under $/EUR600, in a small size that does fit everywhere, the AudioFuse is worth a look. Now, note to Arturia – if this is a big hit, a micro edition might make sense. Or an expanded box that’s a rectangle rather than a square for a little more I/O. In the meantime, I’ve got to go pack my backpack and get a move on.

Got another audio interface you’re using? One you prefer? Let us know in comments.

Bela Mini gives you 1ms sound anywhere, to turn into anything, for £120

Hardware
Faded Instruments has a line of candy-colored 1U tools – easy modular stocking stuffers
gear
The latest 1U tool is a DJ-style innofader crossfader from intellijel
HardwareMacWindows
The best Cyber Monday deals you can get now on synths, plug-ins, and more
MacWindows
MadMapper 5.2 is here, with more lasers! (and DMX CSV, Xbox controllers, and Kinect)