Knob for knob, detail for detail, the new Minimoog app looks like the original and models the model D circuitry. But the iPad/iPhone recreation also adds some new tricks.

And for anyone complaining Moog Music only make stuff for the rich – this will set you back five bucks.

Oh yeah – and forget Behringer clones. Here’s an app from the real Moog company, which if paired with an older model iPad or expected cheaper iPad models coming soon, does more for less. No pesky analog tuning issues, either.

The “Model D” is the original Minimoog – the 1970 keyboard legend that became the template for all monosynths to follow, and that led the Moog lineup for years to come. Actually, wait – let me let Bob Moog describe it:

Moog Music say they’ve closely modeled the original circuitry of the first model D. And because you have the control panel of the original, you also have direct hands-on control of the instrument – albeit with a touchscreen rather than physical knobs. (For comparison to the physical version, see Steve Fortner’s review of Moog’s hardware model D reissue.)

But it’s also interesting that you get some new features, without disrupting the instrument’s historical function. There’s up to four-note polyphony in a chord mode, and a built-in arpeggiator (which makes playing a touchscreen way more practical, too).

They’ve also added additional modules. So, there are effects – a tempo-synced stereo ping-pong delay module, and the “Bender” which does time modulation effects. These pop out of the top of the screen and look a bit like Moogerfoogers. And there’s a real-time loop recorder with overdub, turning this into an effective sketchpad. 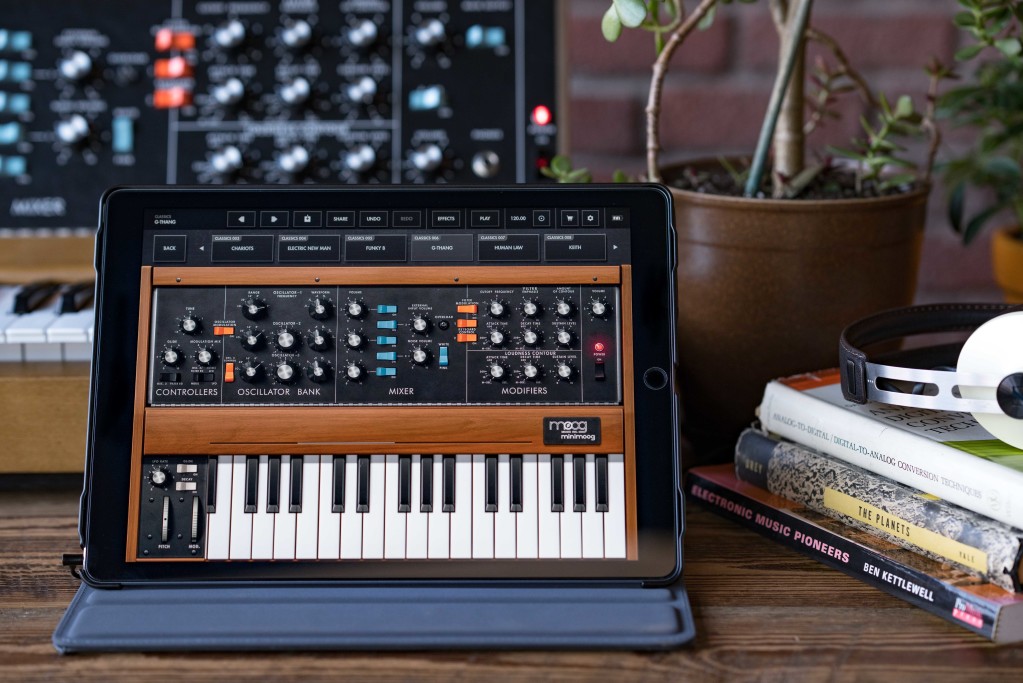 Those additions do make this feel like a creative new entry and not just another historical recreation. But it’s hard not to be a little disappointed, lovely as the Model D is, that Moog didn’t consider making a genuinely new synth. Bob Moog’s own Voyager re-imagined some of the original Minimoog features, and part of what makes the Animoog app great is that it feels like it was created for the iPad, rather than just emulating existing hardware. Don’t get me wrong – a model D app is a no-brainer – but I hope if this is a success, Moog will consider some futuristic synths, too. The iPad is a blank canvas, and it’s be great to see what their engineers would do without the restrictions of hardware.

Then again, the iOS platform also lets you place that historical instrument in new contexts. The Model D app supports AUv3 extension support, so you can load it into other apps (including GarageBand), and even with multiple instances. Add some new effects, and you can make something very 21st century – even if the demo app is selling you on stuff like Devo and the Apollo missions.

The app requires modern hardware, but any 64-bit iPad, iPhone, or iPod touch will work. (So with some clever MIDI mapping, you could have a powerful synth powered by an iPod – and all the hands-on controls. Could be a neat DIY project.)

I’m glad to have it, and it’s also worth noting that apps like that visionary Animoog are on sale now, too – so you can stock up on all the Moog apps for the price of a shirt from their store. Nice! That also includes the handy Filtatron app (which has been modernized and is really useful in conjunction with other software), and the Model 15, which is a terrific way to explore modular synthesis and learn about sound design.

The app comes with a bunch of presets, with more presets as in-app purchases (interesting model there).

And whether you fancy yourself Kraftwerk or Michael Jackson, you now have access to the instrument possibilities those producers did. See where it takes you.

Look, I got through this whole review and avoided the word “iconic.” Wait – that one doesn’t count.

And if you’re curious about the history of the Model D, here’s the nutshell history I wrote for Keyboard with the help of Moog Music, in celebration of its 40th birthday:

The Minimoog at 40: From the Dawn of the Synth Age to New Voyages [Keyboard Magazine, October 2010]

(Oh, yes, indeed: feature request, Moog, if you are going to create a Minimoog app, it’d be really fun to switch it into modes recreating the Models A, B, and C, which effectively only a few people have ever played! That’s an in-app purchase I’d gladly buy!)

Finally, a new controller for your feet, for software or hardware