Polivoks gets a $500 post-Soviet sibling, realizing a dream from 1990

The original creators of the legendary Soviet Polivoks synthesizer are back with an edition that’s small and affordable – completing an idea they had in 1990.

It’s again a collaboration of two generations. As with the ultra-limited run Polivoks reissue, Russian engineers Alexey Taber and Alex Pleninge team up with original Polivoks creator Vladimir Kuzmin and the woman who evidently conceptualized that original design, Olympiada Kuzmina.

The first Polivoks was an artefact of the last years of the Soviet Union, as produced by the Formanta Radio Factory. (Go ahead – look up Kachkanar. This is definitely into the huge swaths of the Russian Federation I’ve never seen!)

And so its reissue reimagined that model, minus the keyboard, as original creator Vladimir Kuzmin worked with engineers Alexey Taber and Alex Pleninge.

Now, again, we get a meeting of two generations. Both Vladimir Kuzmin and Olympiada Kuzmina, Kuzmin’s wife, who evidently conceptualized the appearance of the design, now work with the talented young Moscow-based engineer Arseny Tokarev of Elta Music Devices.

But this is no reissue. The mini was conceptualized in 1990 – but now sees the light of day as a 2018 product. And it’s a perfect way of making the mysterious sound world of the Polivoks more accessible and affordable today. (Arseny Tokarev confirms that previously there had only been the 1990 prototype, fashioned by Kuzmin himself. 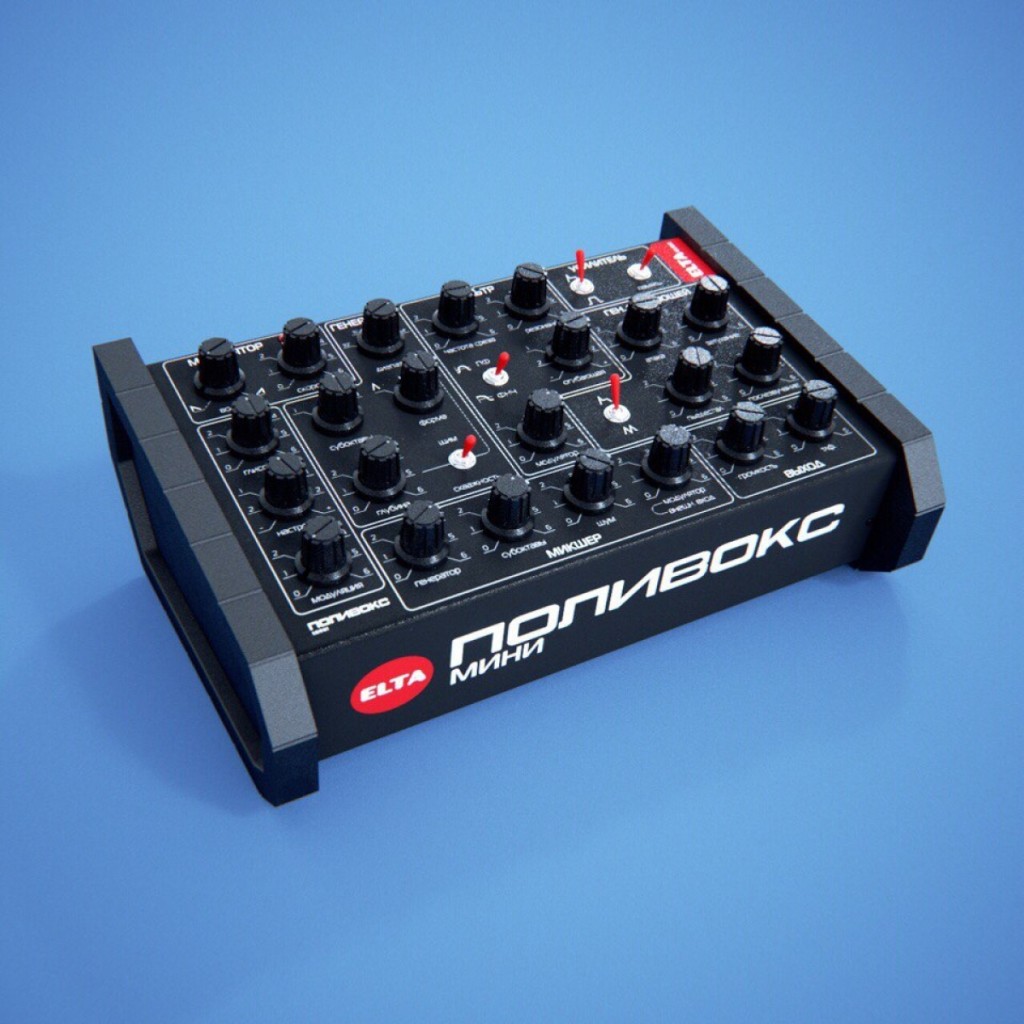 In case you can’t read the Cyrillic alphabet, there’s a Latin version of the panel: 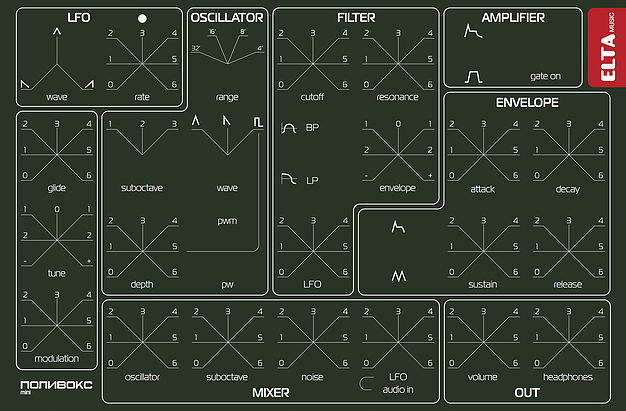 The basic workflow of the original Polivoks is maintained, down to the distinctive use of the modulation (LFO) on the upper left corner and the signature knobs and labels. It’s just nicely simplified – one oscillator (“generator”) instead of two and streamlined controls, plus an LFO that’s fixed to a triangle wave.

They were clever enough not to just stop there, though. So there’s USB and MIDI. (It’s not 1990 any more.) The oscillators are now self-calibrating – sure to disappoint fans of the unpredictability of the original oscillators but please everyone else. So no more waiting for the synth to warm up in winter.

But you still get that wild-sounding Polivoks filter, which screams out as you turn it, and the particular sound of the Polivoks multimode filter. That is, don’t look at a control and assume it sounds like a Moog – it most surely doesn’t.

Here’s the somewhat poetic narrative they’ve made with more details:

The idea of the Polivoks Mini analog synthesizer came into mind in 1990, as the junior version of its older brother well known Polivoks full synth. The aim was to develop a way simpler and lighter device that has less components, offers the same broad capabilities, and removes possible flows of the Polivoks full synth. As the result of this research a new minimalistic schematic appeared. It has fewer controls that are compensated by greater functionality.

For example, in the Modulator section the Form switch has been replaced by the controller with triangular oscillation in the middle position and sawtooth shape oscillation smoothly falling in the extreme positions. The controller for the envelope filter input set to zero in the middle position and smoothly increasing its value by turning the knob clockwise while turning the knob counterclockwise increases inverse voltage of the envelope generator. The main synthesizer sections, such as generator, famous Polivoks filter, multimode envelope generator are essentially the same as Polivoks’s ones and have their unique sound. In addition to that, the main generator of the Polivoks Mini doesn’t require any thermal stabilization or adjustment.

In general, the simplified schematic delivers the sound appreciated by wide range of musicians by minimal means but with new capabilities. The Polivoks Mini will be released as the keyboardless version with integrated USB and MIDI interfaces. The overall design of the Polivoks Mini is made in collaboration with Ms. Olympiada Kuzmina, Polivoks full synth concept designer.

Availability: Expected to ship April/May
Pricing: “Around” US$500

Vladimir Kuzmin walks through the design in a video (Russian only, but… everyone speaks synthesizer):

You know, at some point this was all about post-Soviet chic or the exoticism of instruments from behind the Iron Curtain. But I think a funny thing has happened – the synth world has actually re-calibrated to the point that musicians want to make these left-of-center sounds. And that makes this thing totally delightful.

Just as I’m excited for this year’s Superbooth in Berlin, I’m equally eager for Synthposium in Russia. I’m lucky to have my visa and get to meet people who love the same unruly sounds I do.

Get that signature jungle filter sweep with Mumdance’s Euro module

awesomenessHardwarepreviews
Type in lyrics, and this keyboard sings them, as Casio returns to its Casiotone roots
Hardware
Polyend Tracker 1.5 lets you save custom instruments – and opens up sharing with others
previews
Dorico 4 is finally engraving-level notation with MIDI editing powers, in a single tool
awesomenessHardware
An album released on Nintendo 64 cartridge – the next nerdy Remute ROM release