It’s time for another trip into the strange and wonderful world of artist-created Reaktor ensembles. This time, our guide is dub techno maestro Deadbeat.

The Canadian-born, Berlin-based Scott Monteith is an artist whose chops are at peak maturity, from timbre to rhythm, recording to mix. And Scott’s latest, Wax Poetic For This Our Great Resolve, is both more personal — pulling from inspirational texts from friends — and more sonically intimate. The entire album sounds open and airy and organic, thanks to using acoustic re-recording of electronic elements. Every percussion hit, every synth line was either recorded in real space in the studio or recorded out of the box and into that open space and then miked.

Scott and I got to spend a pleasurably leisurely interview talking about the record, which I wrote up for Native Instruments’ blog:
Deadbeat on a return to hope, sound in real space

With all this focus on acoustic recording and re-recording, you’d think there wouldn’t be much to say about software – but you’d be wrong. There’s yet more shade and color around these sounds that’s produced by synthetic processing, a whole lot of it in Reaktor.

“There’s tons and tons of extra stuff that you would normally delete in vocal takes or guitar takes or whatever that ended up as sauce for feeding vocoders or feeding [Reaktor ensemble] grainstates,” says Scott, “or even some of the real classic [ensembles].” You’re hearing some of that in the hyperreal, clear color of the arrangements and mix.

“I think it’s nice to treat that stuff completely independently,” Scott says, “and then you end up with this bank of stuff that you know is going to be in key. And it’s somehow relatable, whether it be melodically or aesthetically – because you’ve fed it this stuff from a particular track. And then you go back to arrangement mode, because then I can take off my sound designer’s hat and put on my arrangers’ hat.”

Scott is confident enough in his skills to give that secret sauce away, so here’s a tour. Some of these are some long-lost gems of the library, too, so don’t expect to find them just by sorting for the latest or most popular ensembles. Some of these were used on this particular record, others represent a related techniques but have been used on other productions. 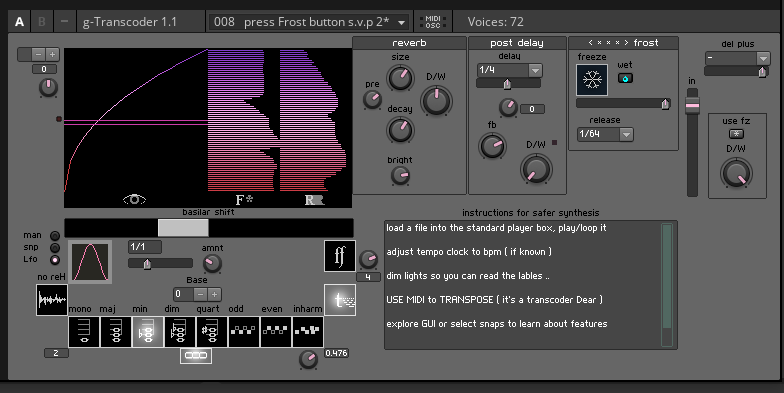 “I’m using that just to add color to things. I love vocoders, period.

It’s like taking the vocals of Gudrun talking or Fatima talking, and using that as the modulator and the carrier signal being the chords in the track. Or it could also be the extra recording of the high hats in the room, and vocoding the vocals with that. So, then you have something rhythmic that’s the same, and in the same air, but then can be free as its own track. Or taking the guitar or the bass…” 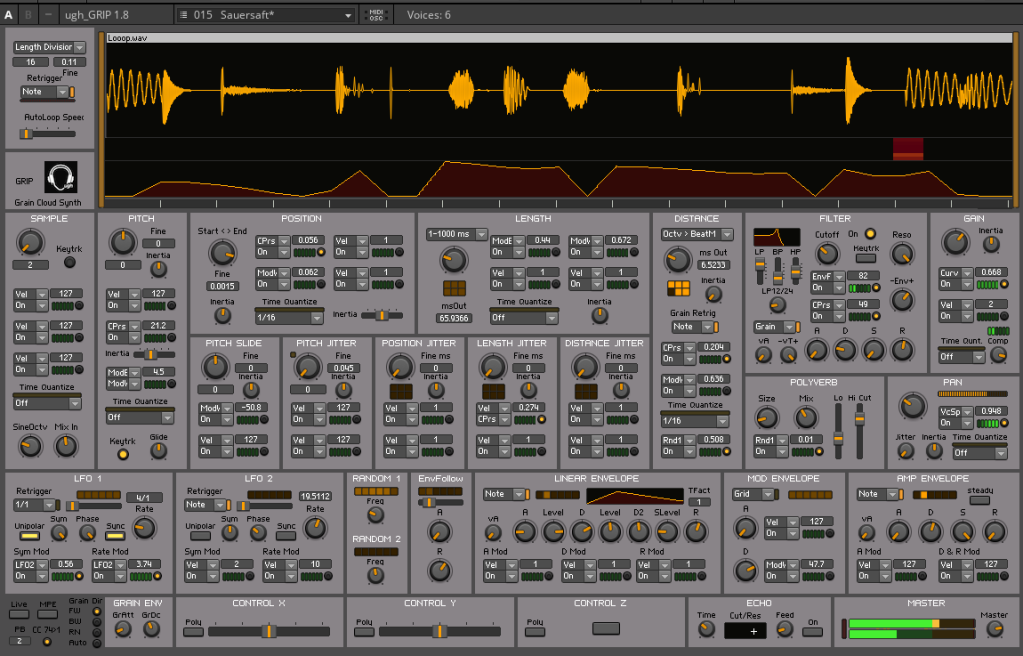 “This is a playable one – this is one you can play with the keyboard. And you can load the oscillator is whatever you load into it.” 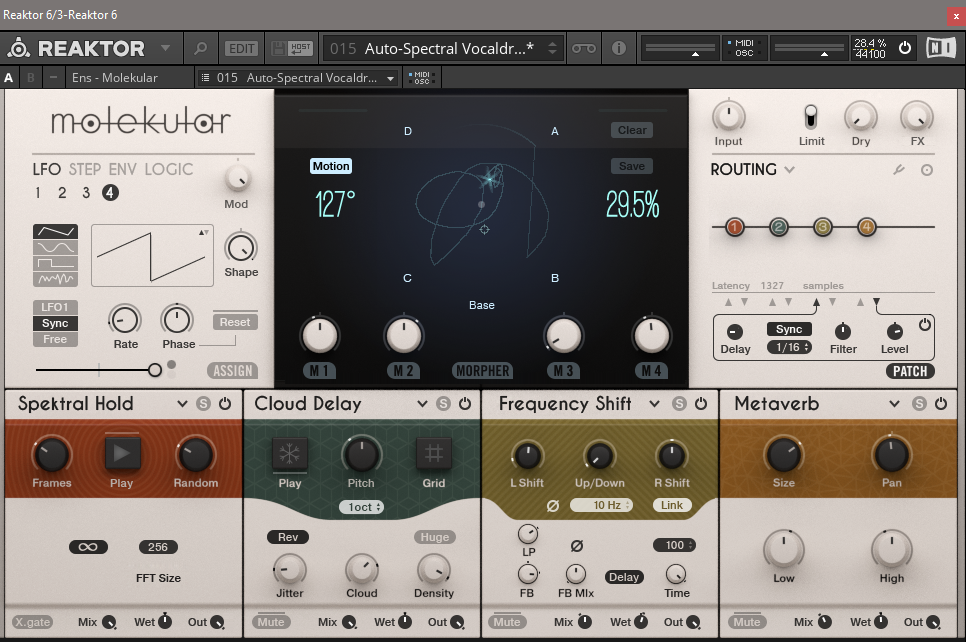 “There goes a few hours of time,” says Scott. “This whole frequency modulation and detune and weird shit that’s going on in these guys is amazing.”

“There’s this preset – ‘Coming Up From Hell.’ I use that a lot – I’ve been using that for years. If you’re rolling along, and you want to create density, it’s like, okay, flip this into the Ultimate Reverb, and all of a sudden you’ve got this underlying loud of ffffoooooosssssh. You’ve made things thick without adding another element.

And that with some sort of distortion, and some sort of sidechain compression to make sure that it doesn’t get in the way of anything — all of a sudden, you’ve created raging hell.” 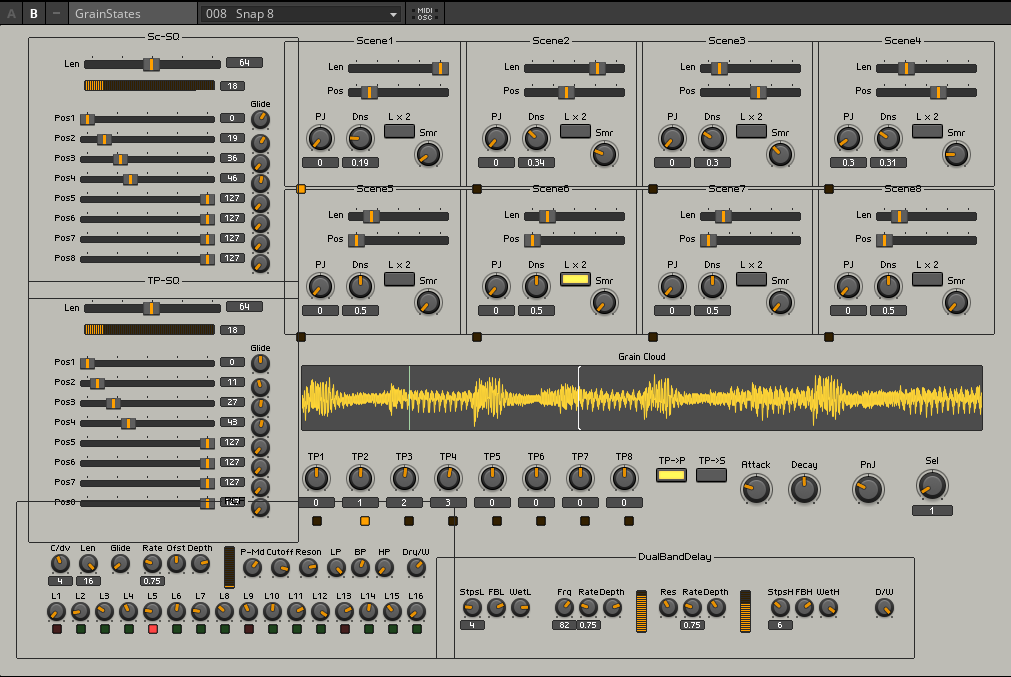 Don’t forget the granular Reaktor ensemble that started the craze. Martin’s landmark granular processor has had an influence even outside the Reaktor community on imagining how grain processing effects can be used as instruments.

The biggest advantage of using Reaktor as a modular environment is, you can hack together what you need if a particular tool doesn’t do exactly what you want. Scott long ago made his name as a Reaktor patcher, but don’t feel obligated to achieve mastery — even he doesn’t necessarily go that route now. “The last one that I did … this thing [Deadbeats] 13 years ago.”

The aforementioned Grain Cloud synth, for instance, he used to substitute oscillators inside a drum machine. Or with granular processors, he’s swapped a sample player with a live input, as on The Swarm. These aren’t complicated hacks – you barely need to know how to operate Reaktor to pull them off. But they then open worlds of new performance and sound design possibilities.

In another instance, Scott had a happy accident hacking mmmd1, the “morphing minimal drum machine” by grainstates creator Martin Brinkmann. That ensemble includes a series of assignable X/Y controllers which can modulate the filter, bitcrush, and so on, with step-based sequencing.

Thanks, Scott! Got more favorite Reaktor ensembles, other granular tools, or the like? Let us know in comments.

Deadbeat on a return to hope, sound in real space [NI Blog]

Deadbeat Wax Poetic For This Our Great Resolve [Review: XLR8R]