A new, powerful synth finds its soul in a cheap plastic FM past

Imagine starting with a painstaking emulation of the lofi sound of instruments like Yamaha’s SHS-10 keytar – but then modulating those quirks in powerful ways. Now you’re getting the mission of the new plug-in from Plogue – PortaFM.

If you lived through the mid-80s – or inherited (or coveted) one of the instruments of the time – you may already know the peculiar sound of Yamaha’s FM PortaSound keyboards. Of course, what was once considered perhaps low quality might seem to our ears now as something else: a unique, complex timbre with interesting, edgy nonlinearities.

And as musical tastes have gradually accommodated a wider range of timbres, recreating such things isn’t necessarily about nostalgia. In a sea of music, people are looking for sounds with edge.

So, with that in mind, meet the OPLL – aka the YM2413 chip core. Tasked with recreating Yamaha’s patented Frequency Modulation (FM) synthesis, the technique first pioneered by John Chowning in the 60s, that chip produced a sound that was different than the best-known Yamaha, the DX7. So while the instruments looked cheesy – and provided the user with little control over sounds apart from calling up presets – they had at their heart a chip capable of creating sounds that may be weirdly more relevant today than when these tools were on the market.

This 1983 ad will give you a sense of where Yamaha positioned its PortaSound line:

Mid 80s chic. But don’t call it a keytar – for Japanese accuracy, call it “Sholky.” 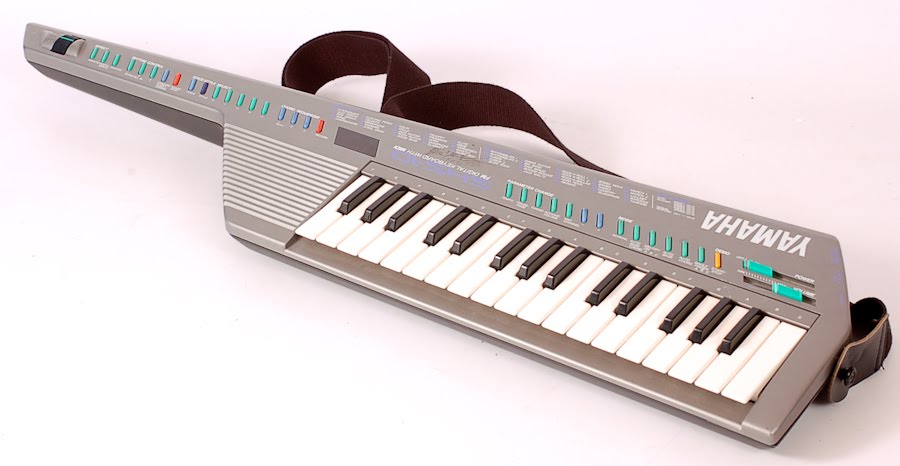 Montreal-based developer Plogue, for their part, have decided not to hide that power from the user. Apart from spending loads of time accurately modeling the chip, they’ve exposed all the parameters of the synthesis engine and drum sounds. (There are still some cues from the originals – note the polygons representing the drum pads, borrowed from the original PSR keyboards, but looking way more futuristic here.)

The work they’ve done on modeling pays off, too. Even just dialing through the presets, you’ll find loads of patches that sound simply alive. It’s not just about being lo-fi; the peculiarities of this particular FM chip give a weirdly acoustic – if alien – quality to some of the sounds. Instead of trying to smooth the edges of FM synthesis, you get more of that unpredictability in ways that can become surprisingly musical.

Transposed from the cheesy toy shells of Yamaha’s original products, you might easily confuse this for some new instrument. But to get there, Plogue were in fact obsessive about reproducing what had been consigned to yard sales and thrift stores. In a video premiering exclusively on CDM, Plogue’s David Viens compares the recreation to the original and explains the emulation.

Yes, kids, now you get to explore the joys of the time-division multiplexed 9-bit DAC on your powerful PC or Mac. Because 9-bit is the future?

The one and only Cuckoo also has visited this new Plogue creation:

I’ve only had the plug-in to play with for a short while, but there’s plenty to enjoy here. Deep under the hood, you can obsess about tiny variations in modeling, but just as fun is playing those lo-fi drum pads or messing about with playing different sounds.

Directly from the main screen, you can get hands on with the FM synthesis approach and percussion.

Mid 80s chic. But don’t call it a keytar – for Japanese accuracy, call it “Sholky.”

Programmers will find plenty of sophisticated options – for instance, you can automate sequences of parameters of your choice. But anyone will find the depth interesting. For instance, layering the percussion atop the FM sounds, under the ‘play’ tab, works exceptionally well.

Stacking percussion on top of your sounds is like adding a delicious, buttery layer of icing. Seriously, I about licked my screen.

You’ll find a range of effects, too:

Plogue are planning more instruments in the chipsynth series, as their models continue to improve and as they collect more data.

But you could argue this is a new direction – even relative to reboots like Roland’s new TR machines taking on the TR-808 and 909. Here, obsessive modeling of digital instruments is meant to create something both historically accurate and simultaneously new. To get topical, it’s the synth equivalent of Donald Glover’s Lando.

Okay, I’m not going to stretch that any further. i will say – PortaFM, you look absolutely beautiful. You truly belong here with us among the clouds.

Venezuela to Berlin, Hyperaktivist on MESS, love, and music community

Inside the livecoding algorave movement, and what it says about music