Performing voltages. The notion is now familiar in synthesis – improvising with signals – but what about the dance between noise and image? Artist Oliver Dodd has been exploring the audiovisual modular.

Integrated sound-image systems have been a fascination of the avant-garde through the history of electronic art. But if there’s a return to the raw signal, maybe that’s born of a desire to regain a sense of fusion of media that can be lost in overcomplicated newer work.

Underground label Detroit Underground has had one foot in technology, one in audiovisual output. DU have their own line of Eurorack modules and a deep interest in electronics and invention, matching a line of audiovisual works. And the label is even putting out AV releases on VHS tape. (Well, visuals need some answer to the vinyl phonograph. You were expecting maybe laserdiscs?)

And SIGINT, Oliver Dodd’s project, is one of the more compelling releases in that series. It debuted over the winter, but now feels a perfect time to delve into what it’s about – and some of Oliver’s other, evocative work.

First, the full description, which draws on images of scanning transmissions from space, but takes place in a very localized, Earthbound rig:

The concept of SIGINT is based on the idea of scanning, searching, and recording satellite transmissions in the pursuit of capturing what appear to be anomalies as intelligent signals hidden within the transmission spectrum.

SIGINT represents these raw recordings, captured in their live, original form. These audio-video recordings were performed and rendered to VHS in real-time in an attempt to experience, explore, decipher, study, and decode this deeply evocative, secret, and embedded form of communication whose origins appear both alien and unknown, like paranormal imprints or reflections of inter-dimensional beings reflected within the transmission stream.

The amazing thing about this project are the synchronicities formed between the audio and the video in real time. By connecting with the aural and the visual in this way, one generates and discovers strange, new, and interesting communications and compositions between these two spaces. The Modular Audio/Video system allows a direct connection between the video and the audio, and vice versa. A single patch cable can span between the two worlds and create new possibilities for each. The modular system used for SIGINT was one 6U case of only Industrial Music Electronics (Harvestman) modules for audio and one 3U case of LZX Industries modules for video.

CDM: I’m going through all these lovely experiments on your YouTube channel. How do these experiments come about?

Oliver: My Instagram and YouTube content is mostly just a snapshot of a larger picture of what I am currently working on, either that day, or of a larger project or work generally, which could be either a live performance, for example, or a release, or a video project.

That’s one hell of an AV modular system. Can you walk us through the modules in there? What’s your workflow like working in an audiovisual system like this, as opposed to systems (software or hardware) that tend to focus on one medium or another?

It’s a two-part system. There is one part that is audio (Industrial Music Electronics, or “Harvestman”), and there is one part that is video (LZX Industries). They communicate with each other via control voltages and audio rate signals, and they can independently influence each other in both ways or directions. For example, the audio can control the video, and the control voltages generated in the video system can also control sources in the audio system.

Many of the triggers and control voltages are shared between the two systems, which creates a cohesive audio/video experience. However, not every audio signal that sounds good — or produces a nice sound — looks good visually, and therefore, further tweaking and conditioning of the voltages are required to develop a more cohesive and harmonious relationship between them. 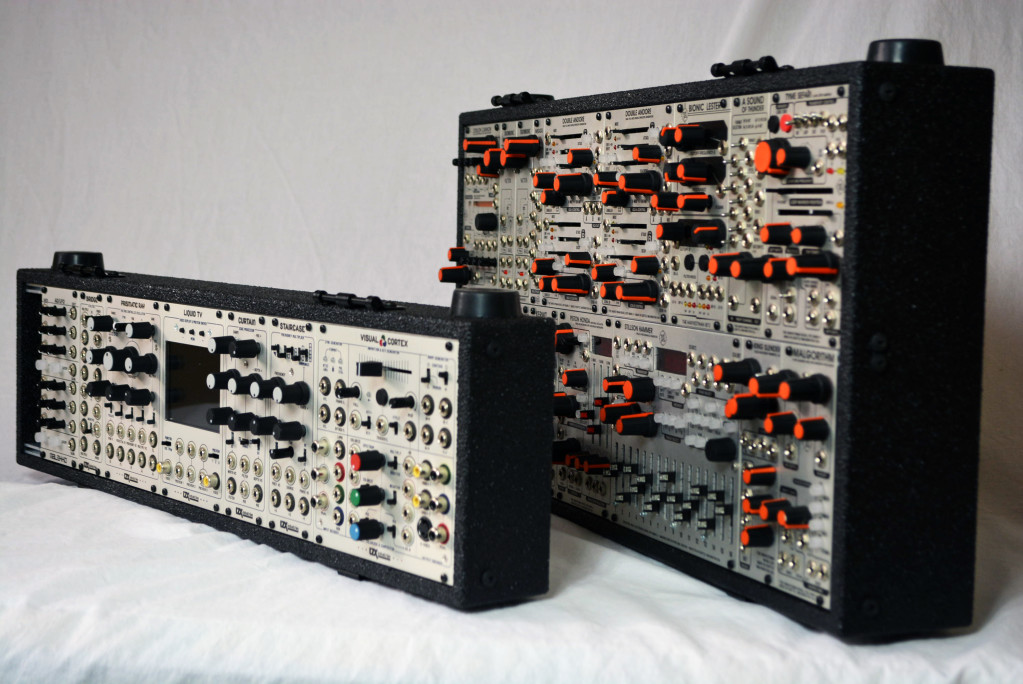 The two systems: a 6U (taller) audio system on the right handles the Harvestman audio modules, and on the left a 3U (smaller) rack includes video processing modules from LZX Industries. Cases designed by Elite Modular.

I’m curious about your notion of finding patterns or paranormal in the content. Why is that significant to you? Carl Sagan gets at this idea of listening to noise in his original novel Contact (using the main character listening to a washing machine at one point, if I recall). What drew you to this sort of idea – and does it only say something about the listener, or the data, too?

What about the fact that this is an audiovisual creation? What does it mean to fuse those media for a project?

The amazing thing about this project are the synchronicities formed between the audio and the video in real time. By connecting with the aural and the visual in this way, one generates and discovers strange, new, and interesting communications and compositions between these two spaces. The modular audio/video system allows direct connection between the video and the audio, and vice versa. A single patch cable can span between the two worlds and create new possibilities for each.

And now, some loops…

If this were a less cruel world, the YouTube algorithm would only feed you this. But in the meantime, you can subscribe to his channel. And ignore the view counts, actually. One person watching this one video is already sublime.

The Touché, adding expression to synths – just in time for Moogfest

artists
Watch this Kazakh pop video for the maximum weirdness of Casio’s singing robot keyboard
Hardware
Type in lyrics, and this keyboard sings them, as Casio returns to its Casiotone roots
artists
Head by drone to a 3000-year old ruined village for a stunning performance by Hayk Karoyi
artists
Celebrate your Blue Monday with the choir sound from New Order – and Kraftwerk’s Orchestron