The Roland Go:Mixer Pro packs a complete mixer into a handheld device, and it interfaces with your iPhone, Android phone – or anything else. We got one of the first units to test. 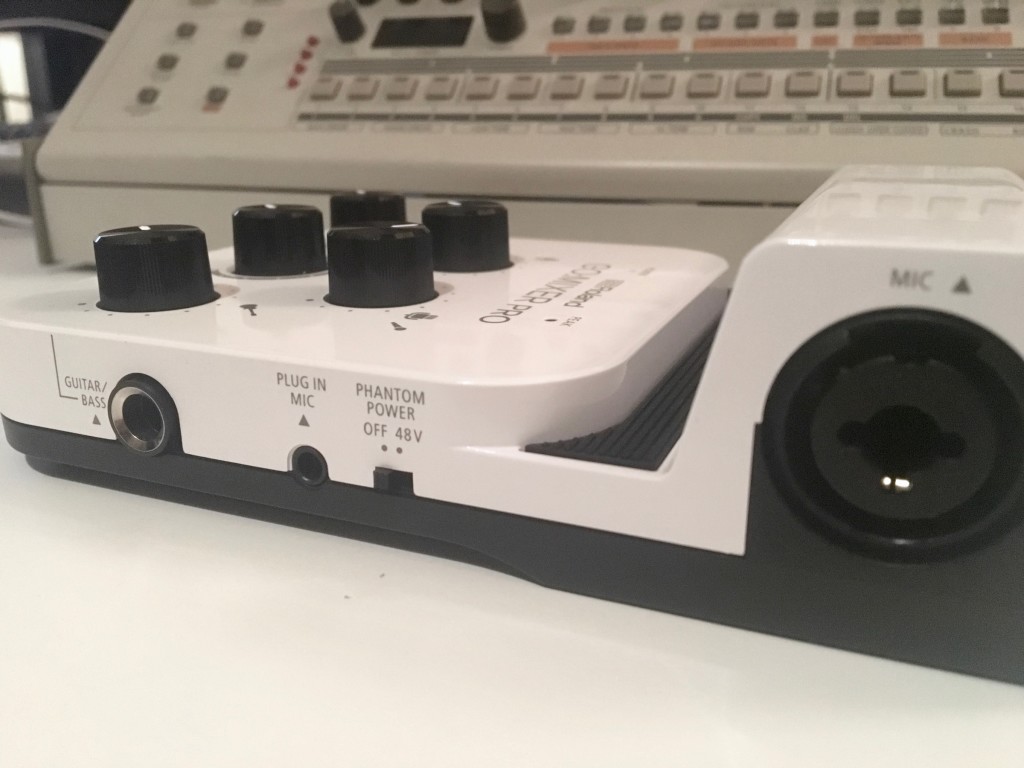 Compact enough to make the compact TR-09 behind it look huge. From left: inputs for guitar/bass (high impedance), plug-in mic (like a lapel mic), phantom power switch (needed for some microphones to function), and a full XLR-1/4″ combo jack for a mic – that last one is why it’s got the big bulge.

Your phone is missing a mixer

Smartphones at least ought to mean that we don’t carry around dedicated recorders (and their batteries and SD cards) as often. Your iPhone or Android phone or other mobile device also boasts apps for editing and managing recordings, even before you get into more creative production and live effects tools. And most importantly, they’re connected for live streaming or uploading the results. 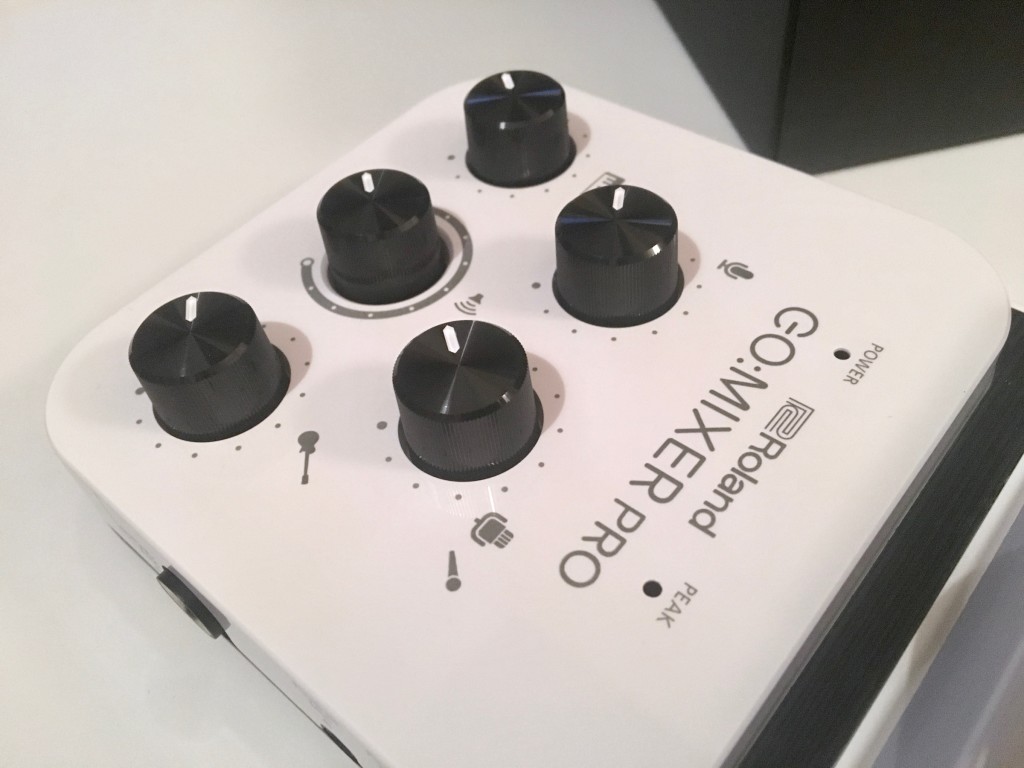 Various products will let you connect and record instruments, or serve as more practical sound recording solutions for video shoots.

But what about the scenarios where you have a send of sound toys, synths and drum machines, instruments and microphone, or even different gadgets (like a jam session with a couple of iPads or a couple of fun phone apps)?

That’s where the Go:Mixer Pro comes in. It’s a stereo in/stereo out interface to phones and smartphones and computers, but it’s also a mixer. (It’s a standalone mixer, too, and you might even wind up using it just as much as that.)

You can connect and mix multiple inputs (9 channels in, 2 channels out):

That’s the domain normally of ultra-small Behringer mixers and … not much else beyond that. Depending on the gear you’re using and whether you want mono and stereo connections, that’s somewhere between four and six independent sources.

For line output, there’s just the stereo minijack labeled monitor output, though I did connect it to my studio mixer as well as studio headphones.

But there’s also a USB connection round the back. So the Go:Mixer Pro is also a 48K/16-bit stereo audio interface – you get two channels of input and two channels of output. 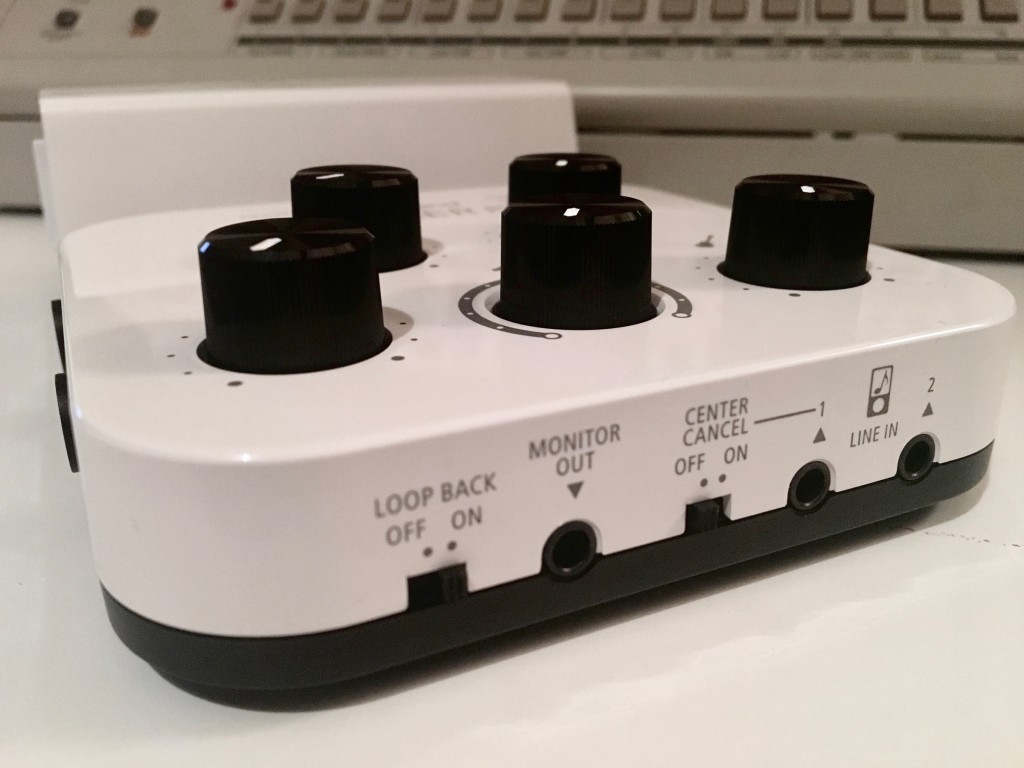 Front jacks – those are actually two separate inputs (each stereo) on the right.

USB means out-of-the-box support for computers and Android (OTG) phones and so on, a well as Raspberry Pi and other goodies. For iOS, Roland also supports “Made for iPhone” and includes a Lightning cable, so you get seamless operation with iPhones and iPads.

This isn’t a multichannel audio interface, only stereo, but that still fits many use cases – like recording gigs and jam sessions.

While it’s billed as a phone accessory, the mixer also works standalone – so you can just use that USB jack for power, via the dongle you already have for your phone or other gadget. 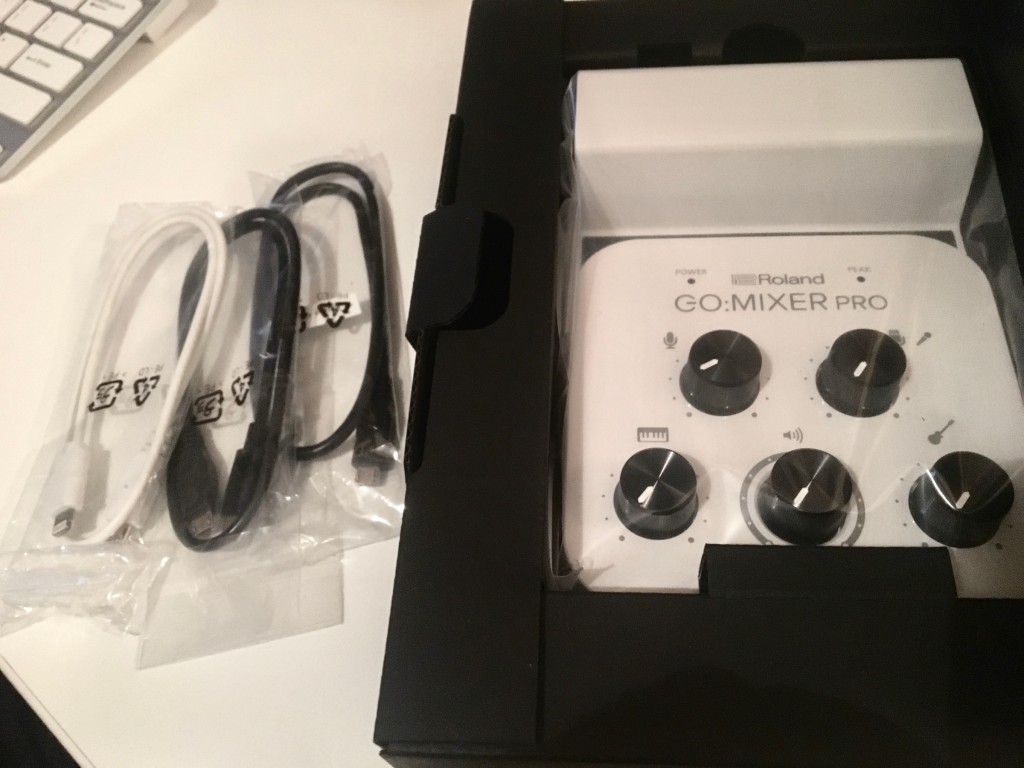 Three cables are included, for each possible device.

Roland has packed this mixer/interface into a tiny form factor. The footprint is only about as deep as the iPhone 6 is tall. And it’s fairly slim, apart from a big bulge at the back to house the XLR combo jack and a battery compartment.

The batteries come in handy – you’ll need them to use the mixer standalone without USB power plugged in, if you want to avoid drawing power from your phone, or if you want to use a mic with phantom power with your iPhone. (Android phones will let you draw battery from the phone for phantom power; Apple are … more protective.)

Roland has included all the necessary cables in the box – USB-C, Micro USB, and Apple Lightning connections. That covers just about any computer or external power or Android or Apple phone.

But that cute little tabletop format is awfully useful. Yes, it’s marketed for smartphones, but you could also connect a Roland TR-8S, TB-03, and SH-01A to this little gadget for some on-the-go acid techno.

One constructive criticism to Roland on out-of-box experience: since this is geared for beginners, it’s a shame the box comes with no batteries and only a sheet pointing to a website in place of a copy of the (very friendly) short manual. Also a bit puzzling as they try to reach newbies: there are graphical icons on the top panel (a keyboard! a guitar!), but text labels on the connections (“instrument?”). 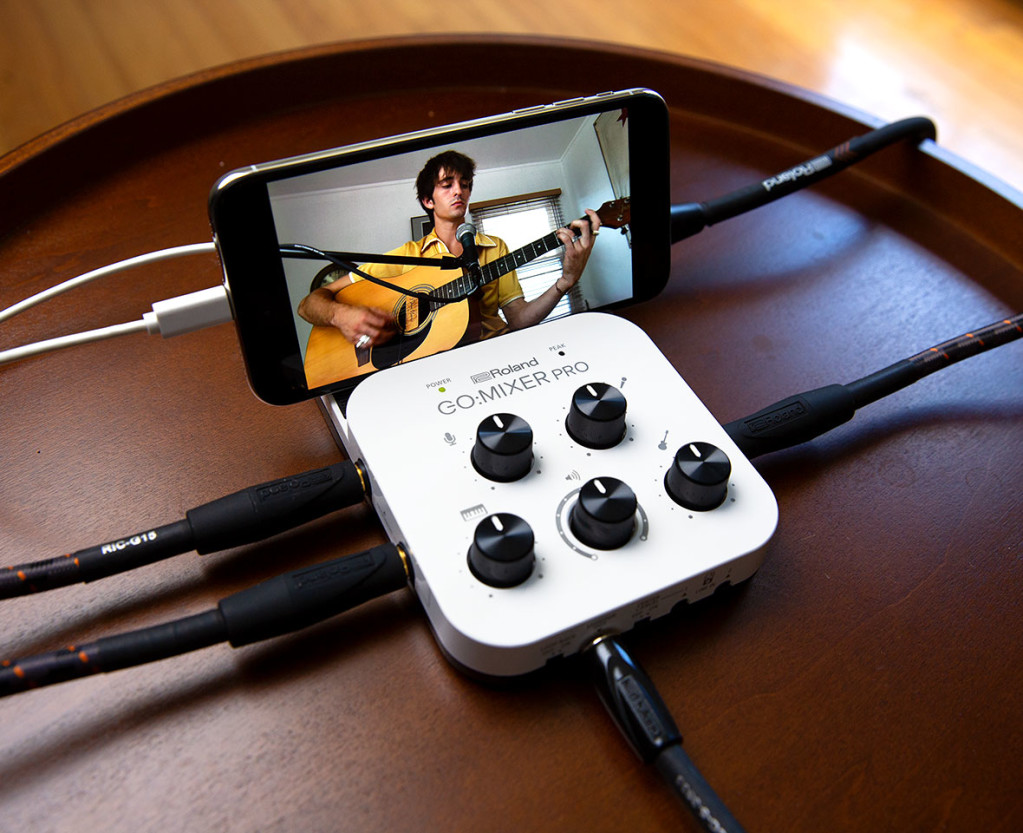 Operation is really plug-and-play. There’s not much feedback on level apart from a tiny “PEAK” light, but that’s okay — there are big, easy-to-see knobs.

Routing is rudimentary, but there’s a useful LOOP BACK switch – this records video while looping audio from your phone back into the device. Roland suggests doing this when you want to “play back music” while shooting video, but obviously it’s useful for production applications, as well.

LOOP BACK function: With LOOP BACK set to on, you route the full mix, with the monitor out level, back to the input of your device (over USB), combined with playback from the device. With it off, you only get the mix, not the playback of your device – so you can record to a DAW app or use the whole setup for layering multitrack recordings.

And in case you forgot Roland is a Japanese company, there’s a karaoke mode. A center cancel feature is designed to remove vocals so you can host your own karaoke night.

Roland also makes Android and iOS devices intended for shooting video, though any audio device-aware application will also make good use of the hardware.

Here’s what’s really important: the thing sounds really good. The mic pre and mix circuitry is transparent – I tried it with a couple of higher-end condenser mics and had no qualms inserting the mixer in my studio signal chain. Mic pre, input circuitry, everything is fine. (I haven’t had it long enough to test the guitar in, but I’ll guess it … works.) I have heard complaints about some other compact gadgets and the non-Pro mixer from Roland, but this one is fine – and that for me is reason to spend the sticker price. I’d rather buy one $170 gadget I get a lot of use out of rather than three that are disposable and flawed.

And that’s what sets this and some other recent mobile gear apart. It’s consumer-friendly, yes — but there’s no reason you can’t use this as a serious studio tool, as well. And that’s how it should be.

Street price: USD$169.99 – okay, that’ll turn some people off, but frankly I’m glad to have a quality, quiet mixer 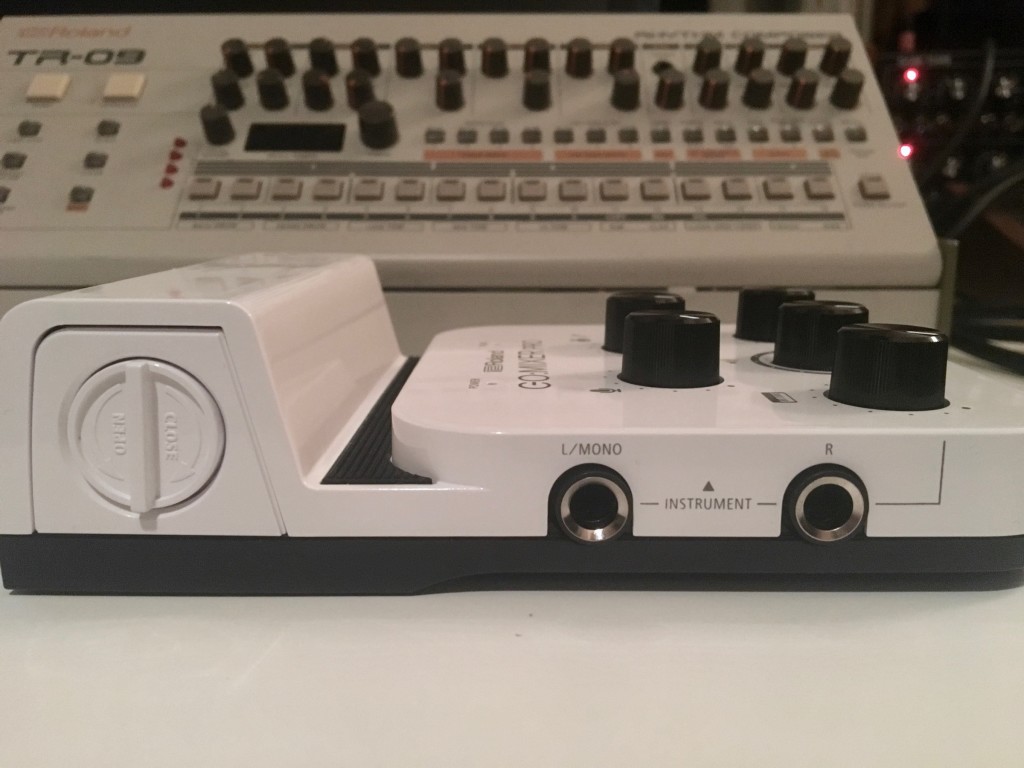 Battery case, and the two instrument jacks – you can use those as two mono inputs, or a stereo pair.

Anyone who’s been to a Berlin flea market in the past half decade will no doubt be reminded of the locally made POKKETMIXER. But that device, while a cute and cool proof of concept, is entirely unpowered, so it only mixes headphone outputs. It’s useful for crossfading between two smartphones, and that’s about it.

IK have so many devices that it’s possible one of theirs is more what you need than the Go:Mixer Pro. If it’s mainly an interface you want, for a guitar, for a mic, or for line recordings, IK Multimedia has an array of options. Apart from specialized guitar, stompbox/pedalboard, and AV options, the iRIG Pro DUO is most capable with dual preamps and balanced outputs. That interface also, crucially, has MIDI. (IK also makes standalone MIDI interfaces.)

And then there are devices that are just mixers, though for the moment few are challenging Behringer’s offerings in the subcompact mixer space. Some of those additionally have USB audio interface capability ,but that’s not the same as native iOS support, and they tend to be bulkier than this.

So to me, the Go:Mixer Pro just solved a major need for quick recordings and jam sessions. The fact that it’s a mixer as well as an interface makes it doubly convenient, and easy access to those input levels is also a big plus.

I just wish the interface with the Roland brand on it had MIDI, too – this is just shy of being an ideal ultra-compact mixer for, say, the Boutique Series. But I plan to make this a permanent part of my carry-on, and I bet I’m not alone.

Exploring a journey from Bengali heritage to electronic invention