Roland now routinely enjoy the fact that August 8 is “808” day. But we aren’t seeing new product announcements today as in some past years. What you get instead is a bunch of updates for existing gear. Here they are in one place so you can see what’s relevant to you.

All AIRA products – a new Web resource with free sounds. Roland have a newly redesigned AIRA website. Instead of splashy promotional things being thrown at you, you get a tidy selection of news and updates – and, importantly, a Sound Library with free patches and sound content. For now, that includes the TR-8S drum machine and SYSTEM-8 synth, but Roland tells us the site will cover the whole AIRA lineup over time. And there are some gems in there already, like polymeter stuff from live virtuoso and producer KiNK, and FM and percussion sounds that use the synth engine in the SYSTEM-8.

TR-8S / TR-8 – STEP LOOP. Firmware update 1.10 adds STEP LOOP to the TR-8S flagship (808-inspired) drum machine, plus the earlier (and more neon green) TR-8. What does it do? It repeats steps as you hold them down, including repeating multiple steps if you hold multiple steps down, and then returns to the pattern when you release the buttons. Simple feature, big results – because you can jam with variations over top of a pattern, without losing your place. (Some other drum machines have had a similar feature, so it’ll be even more welcome to those users on the TR-8/8S.) It’s easier to show than describe, so we’ll have a video hands-on later.

SYSTEM-8 – JX-3P add-on. SYSTEM-8 synth owners get a nice freebie: a complete model of Roland’s 80s classic, the JX-3P, in “PLUG-OUT” form (meaning the model can be loaded directly onto the hardware).

Oh yeah, and the SYSTEM-8 has been coming into its own this summer. It got an FM oscillator for a wider range of timbres, plus new filters. Now, you get a model of a great polyphonic synth for free, too. (Remember when Roland was charging for PLUG-OUT add-ons for hardware owners? Seems they’ve gotten away from that.)

It’s all in the latest update.

Speaking of the SYSTEM-8, that platform also got a boost with the US$19.99 Synthwave library, designed by our friend Francis Preve along with Jim Stout, showing off some of the retro Roland sounds you can get out of this engine. And in case you didn’t get the 80s / 90s nostalgia flowing yet, their promo video will do it for sure:

It covers the Juno-106 and Jupiter-8 engines as well the SYSTEM-8’s own original modeled synth engine. Of course, what’s nice about this is you then have access to the sounds in both software (Roland Cloud) and hardware, and then you get hands-on tweakability on the hardware – so you can start with one of these presets and then shape it a bit.

All of this says something about value in 2018 instruments. It’s not just about the new gear when you take it out of the box, but the value over time. (See also major firmware updates lately from Novation and Elektron, among othes.) Add in the JX-3P, and maybe that sound library, and the SYSTEM-8 is really maturing into a lovely bit of kit. 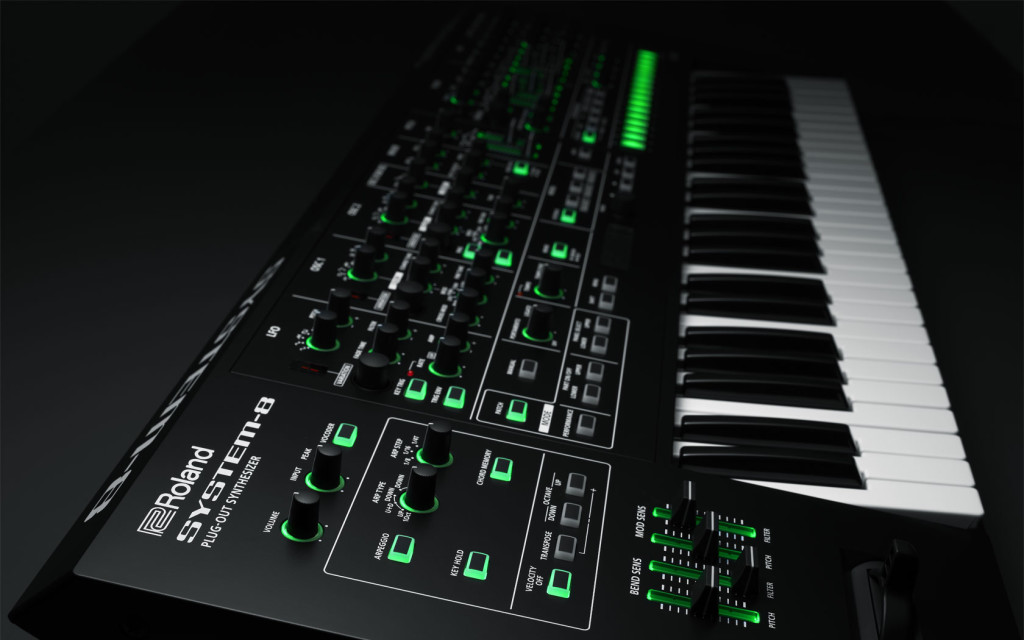 The SYSTEM-8, now with JX-3P sounds on top of Juno-106 and Jupiter-8 (plus its own original engine).

And yeah, maybe some people will be disappointed about no new gear, but… that STEP LOOP. That JX-3P. Not paying for either. So, hey, like:

The 808 just got its own hipster IPA beer in London