Watch The Black Madonna DJ live from … inside a video game

Algorithmic selection, soulless streaming music, DJ players that tell you what to play next and then do it for you… let’s give you an alternative, and much more fun and futuristic future. Let’s watch The Black Madonna DJ from inside a video game.

This is some reality-bending action here. The Black Madonna, an actual human, played an actual DJ set in an actual club, as that entire club set was transformed into a virtual rendition. That in turn was then streamed as a promotion via Resident Advisor. Eat your heart out, Boiler Room. Just pointing cameras at people? So last decade.

From Panorama Bar to afterhours in the uncanny valley:

This is less to do with CDM, but… I enjoy watching the trailer about the virtual club, just because I seriously never get tired of watching Marea punching a cop. (Create Digital Suckerpunches?)

Um… apologies to members of law enforcement for that. Just a game.

So, back to why this is significant.

First, I think actually The Black Madonna doesn’t get nearly the credit she deserves for how she’s been able to make her personality translate across the cutthroat-competitive electronic music industry of the moment. There’s something to learn from her approach – to the fact that she’s relatable, as she plays and in her outspoken public persona.

And somehow, seeing The Black Madonna go all Andy Serkis here puts that into relief. (See video at bottom.) I mean, what better metaphor is there for life in the 21st century? You have to put on a weird, uncomfortable, hot suit, then translate all the depth of your humanness into a virtual realm that tends to strip you of dimensions, all in front of a crowd of strangers online you can’t see. You have to be uncannily empathic inside the uncanny valley. A lot of people see the apparent narcissism on social media and assume they’re witnessing a solution to the formula, when in fact it may be simply signs of desperation.

Marea isn’t the only DJ to play Grand Theft Auto’s series, but she’s the one who seems to actually manage to establish herself as a character in the game.

To put it bluntly: whatever you think of The Black Madonna, take this as a license to ignore the people who try to stop you from being who you are. It’s not going to get you success, but it is going to allow you to be human in a dehumanizing world. 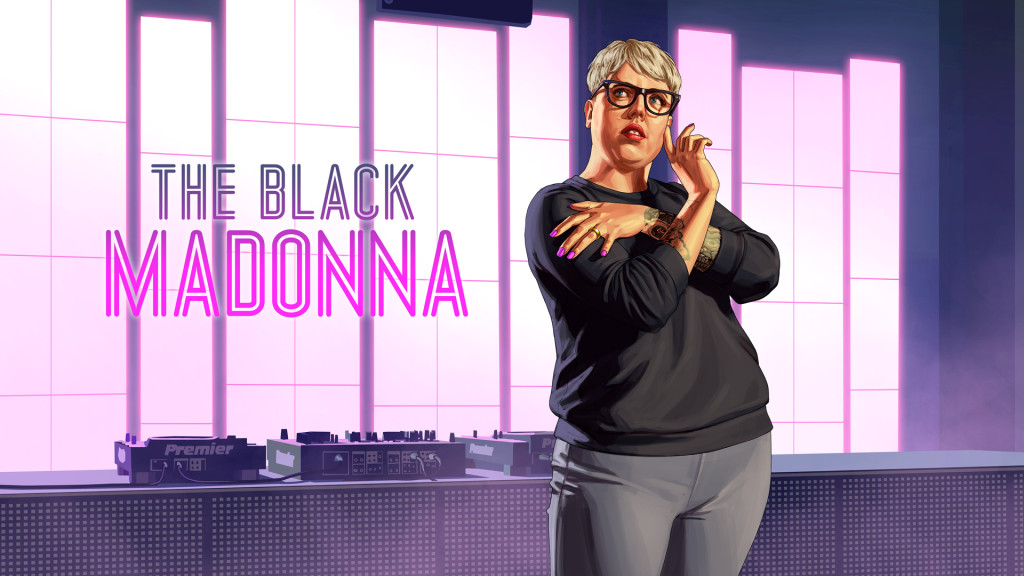 And then there’s the game itself, now a platform for music. Rockstar Games have long been incurable music nerds – yeah, our people. That’s why you hear well curated music playlists all over the place, as well as elaborate interactive audio and music systems for industry-leading immersion. They’re nerds enough that they’ve even made some side trips like trying to make a beat production tool for the Sony PSP with Timbaland. (Full disclosure: I consulted on an educational program around that.)

This is unquestionably a commercial, mass market platform, but it’s nonetheless a pretty experimental concept.

Yes, yes – lots of flashbacks to the days of Second Life and its fledgling attempts to work as a music venue.

The convergence of virtual reality tech, motion capture, and virtual venues on one hand with music, the music industry, and unique electronic personalities on the other I think is significant – even if only as a sign of what could be possible.

I’m talking now to Rockstar to find out more about how they pulled this off. Tune in next time as we hopefully get some behind-the-scenes look at what this meant for the developers and artists.

While we wait on that, let’s nerd out with Andy Serkis about motion capture performance technique:

Ask this booty-moving veteran techno producer anything, on Reddit

DJ
Head by drone to a 3000-year old ruined village for a stunning performance by Hayk Karoyi
games
An album released on Nintendo 64 cartridge – the next nerdy Remute ROM release
3Danalysisgamesgaming
NVIDIA’s Omniverse and Studio let you create 3D worlds together – and they’re free to use
3DVR
VR becomes a fluid medium, a music video you can play, more, in PatchXR Patchathon