Spotify has begun opening uploading not just to labels and distributors, but individual artists. And the implications of that could be massive, if the service is expanded – or if rivals follow suit.

Among major streaming players, currently only SoundCloud lets individual artists upload music directly. Everyone else requires intermediaries, whether that’s labels or distributors. The absurdity of this system is that services like TuneCore have profited off streaming growth. In theory, that might have meant that music selections were more “curated” and less junk showed up online. In reality, though, massive amounts of music get dumped on all the streaming services, funneling money from artists and labels into the coffers of third-party services. That arrangement surely makes no sense for the likes of Spotify, Apple, Google, and others as they look to maximize revenue.

Music Business Worldwide reports that Spotify is starting to change that now:
Spotify opens the floodgates: artists can now upload tracks direct to the streaming platform for FREE

Spotify will now let indie artists upload their own music

What we know so far…

You’ll upload via a new Web-based upload tool. Check the tool and FAQ.

It’s invite-only for now. A “small group of artists” has access for testing and feedback, Spotify says.

It won’t cost anything, and access to releases will be streamlined. No fees, the full commission – the deal is better financially. And you’ll be able to edit releases and delete music, which can be a draconian process now through distributors.

Regions are a big question. The tax section currently refers to the W9 – a tax form in use in the USA. So clearly the initial test is US-only; we’ll see what the plans are for other regions. 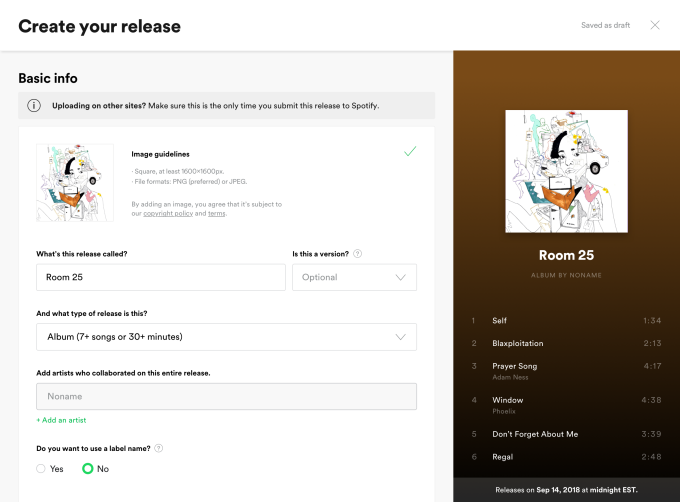 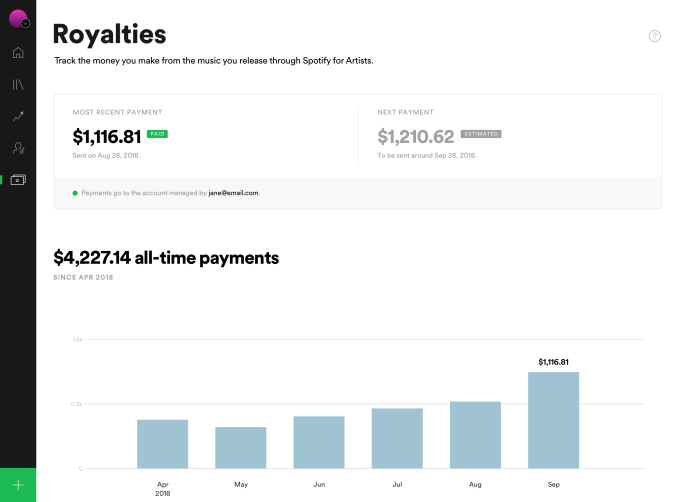 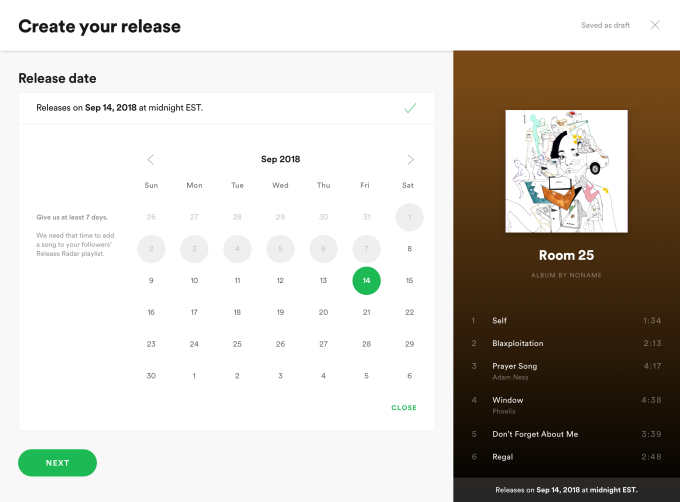 You have to look into the future before this really starts to matter, because it is so limited. But it could be a sign of things to come. And bottom line, Spotify can give you a better experience of what your music will be like on Spotify than anyone else can:

You’ll be able to deliver music straight to Spotify and plan for the perfect release day. You’ll see a preview of exactly how things will appear to listeners before you hit submit. And even after your music goes live, you’ll be in full control of your metadata with simple and quick edits.

Just like releasing through any other partner, you’ll get paid when fans stream your music on Spotify. Your recording royalties will hit your bank account automatically each month, and you’ll see a clear report of how much your streams are earning right next to the other insights you already get from Spotify for Artists. Uploading is free to all artists, and Spotify doesn’t charge you any fees or commissions no matter how frequently you release music.

Now in Beta: Upload your music in Spotify for Artists [Spotify Artist Blog]

The question really is how far they’ll expand, and how quickly. If they use all of Spotify for Artists, as their blog news item would seem to imply, then some 200,000 or so verified artist accounts will get the feature. (I’m one of those accounts.) 200,000 artists with direct access to Spotify could change the game for everyone.

The potential losers here are clear. First, there are the distributors. So-called “digital distribution” at this point really amounts to nothing of the sort. While these third parties will get your music out to countless streaming services, for most artists and labels, only the big ones like iTunes and Spotify count to most of their customers. At the entry level, these services often carry hefty ongoing subscription fees while providing little service other than submitting your music. More personalized distributors, meanwhile, often require locking in multi-year contracts. (I, uh, speak from experience on both those counts. It’s awful.)

Even the word “distributor” barely makes sense in the current digital context. Unlike a big stack of vinyl, nothing is actually really getting distributed. More complete management and monetization platforms actually do make sense – plus tools to deal with the morass of social media. Paying a toll to a complicated website to upload music for you? That defies reason.

The second potential loser that comes to mind is obviously SoundCloud. Once beloved by independent producers and labels, that service hasn’t delivered much on its promise of new features for its creators. (Most recently, they unveiled a weekly playlist that seems cloned from Spotify’s feature.) And SoundCloud’s ongoing popularity with users was dependent of having music that couldn’t be found elsewhere. If artists can upload directly to Spotify, well … uh, game over, SoundCloud. (Yeah, you still might want to upload embeddable players and previews but other services could do that better.)

Just keep in mind: Spotify for Artists was 200,000 users at the beginning of summer. At least as of 2014, SoundCloud was creating 10 million creators. So it’s not so much SoundCloud losing as it is another sign that SoundCloud won’t really take on Spotify – just as Spotify (even with this functionality) really doesn’t even attempt to take on SoundCloud. They’re different animals, and it’s frustrating that SoundCloud hasn’t done more to focus on that difference.

But all this still remains to be seen in action – it’s just a beta.

Just remember how this played out the first time. Spotify reached a critical mass of streaming, and Apple followed. If Spotify really are doing uploads, it’d make sense for Apple to do the same. After all, Apple makes the hardware (MacBook Pro, iPad) and software (GarageBand, Logic Pro X) a lot of musicians are using. And they tempted to capitalize on their strong relationships with artists once, with the poorly designed Connect features (touted by Trent Reznor, no less). They just lag Spotify in this area – with the beta Apple Music for Artists and Apple Music Toolbox.

Meanwhile, I wouldn’t write off labels or genre-specific stores just yet. If you’re making music in a genre for a more specific audience, dumping your music on Spotify where it’s lost in the long tail is probably exactly what you don’t want to do. Streaming money from the big consumer services just isn’t reaching lesser known artists the way it is the majors and big acts. So I suspect that perversely, the upload feature could lead to an even closer relationship between, say, electronic label producers and labels and services tailored to their needs, like Beatport. (We’re waiting on Beatport’s own subscription offerings soon.)

But does this make sense? It sure does for the streaming service. Giving the actual content makers the tools to upload and control tags and other data should actually reduce labor costs for streaming services, entice more of the people making music, and build catalogs.

And what about you as a music maker? Uh, well… strap in, and we find out.

The new Jaguar cars sound like spaceships, thanks to Richard Devine