Apple’s new iPad Pro: USB-C is in, headphone and home button are out

Apple’s new iPad Pro again establishes the high-end of Apple’s tablet line. But it also reveals some significant changes that iPad-using musicians will notice – USB-replaces Lightning, and the headphone jack and home button are gone.

Apple’s own marketing reveals something of how they think of computing – “a magical piece of glass that does everything you need.” And in that regard, the new iPad continues Apple’s leadership both in quality of display and the computational and graphics horsepower underneath. The iPad Pro has a dramatically better display, and dramatically faster hardware to power it, both of which will benefit creative apps including music and visual creation. These are the high-end models – US$799 and up for the smaller model starting at 64GB, $999 for the bigger display.

The chip in this case is the A12X Bionic, which boosts all three categories of hardware performance we’re now seeing in mobile – CPU/computation, GPU/graphics, and now machine learning-specific optimizations. Apple has also vastly improved their Pencil for those using that. Most notably, you don’t have that awkward problem of charging with the pencil balanced from a Lightning port; you can just magnetically attach it to your iPad and it charges automatically. There’s a new keyboard design, too, which is also welcome. (I prefer my Logitech keyboard to Apple’s offering on my older iPad Pro; we’ll see if this time round, the first-party offering is more competitive.)

The boosted performance comes at a nice time for Apple apps, as Adobe ships full-blown Photoshop and promises an augmented reality platform next year.

About that port: now in place of Lightning, you get a USB-C port. The good news about this is, you get a single port for connectivity and charging. And it’s the same one you’d use with your later-generation MacBook (or newer PC).

The bad news is, there’s only one port. That means dongles not only for USB-C use, but also you’ll need an adapter that has pass-through charging if you want to charge your iPad and use accessories. Lightning-based accessories are also out.

Oh yeah, “USB-C” – a phrase which is utterly confusing, since it describes the connector but not what the connector implements. (I will reach out to Apple for comment on that.) We do know there’s support for advanced external displays, but that requires … still more dongles. (“Up to 4K through USB-C Digital AV Multiport Adapter and USB-C VGA Multiport Adapter,” sold separately.)

And Apple has eliminated the headphone jack. That’s defensible I think on a phone, which has limited space and benefits from better water resistance. On a hefty tablet, though, it’s inconvenience without any real purpose. 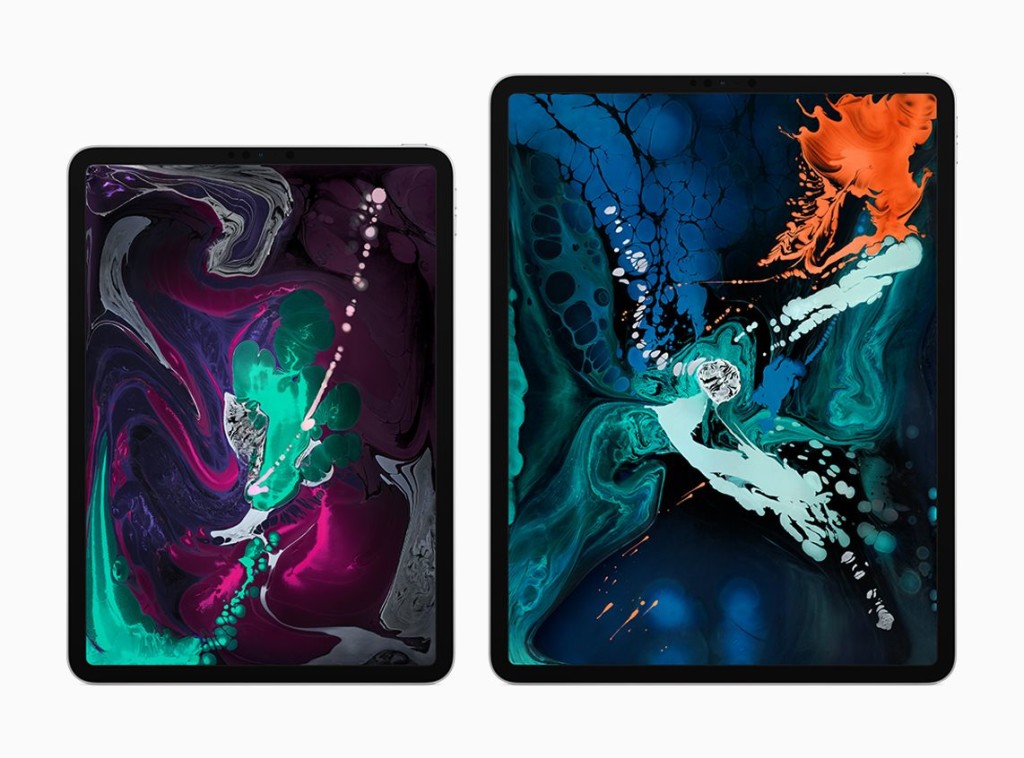 This doesn’t mean the end of iPads for audio use – you just add an adapter. But it adds some additional resistance for pro users. And I remain puzzled as to why Apple doesn’t offer its own more innovative pro solution based on USB-C, other than a bunch of plain-vanilla but very-expensive adapters.

There’s another, subtler problem. For a lot of us, one of the big use cases for the iPad is use as a control surface for other apps. If you’re using an iPad onstage, though, one of the first things you’d want to do is disable all those gestures, so you don’t accidentally trigger them while running your live show or jamming. Since the new iPad Pro eliminates the dedicated home button, that’s no longer an option – and the upward swipe for the home button means you’re liable to accidentally exit your controller app. That’s pretty unpleasant if you’re onstage.

Wait, a solution! There’s a great reader tip for addressing this issue: turn on Guided Access, which limits usage to one app and prevents accidentally quitting your control app (among other things). Thanks, SoundDifferent. Here’s how to use it:

All of this could be another reason to consider something like a Windows touch-enabled device instead of an iPad Pro, particularly at the high end. $300-400 iPads are just phenomenally better than anything running Windows or Android right now, so there it’s no contest. But at the price point of the high-end iPads Pro, you might want to do some pros/cons with Windows.

And I don’t expect this news to go over terribly well, because it’s coming atop a year that left anyone looking for high-spec Mac desktops in the cold … again. So you get some utterly gorgeous iPads, but they’re still port-challenged. And you get updated MacBook and Mac mini, but still favoring slimness and battery life over high-end specs.

Apple has hinted there’s more in the pipeline, but it seems that we’ll see those results some time next year. In the meantime, some iOS developers I know are taking a more serious look at competing platforms – but that may be for the best, anyway.

Heavy iPad users I’m sure will want these, and if you’ve been putting off Mac mini or slim MacBook purchases, now you finally can make your move. Just expect some added griping from pro users about losing ports, especially when there’s not a clear immediate benefit in trade.