Moog reveal their first polysynth in decades – inside the Moog One

It’s been a decades-long wait, but now Moog have revealed a flagship polyphonic keyboard instrument – a new dream synth. It’s high-end, for sure, but it also reveals where the brand that became synonymous with synthesis sees us going next. We’ve talked to Moog to find out more on today, release day. 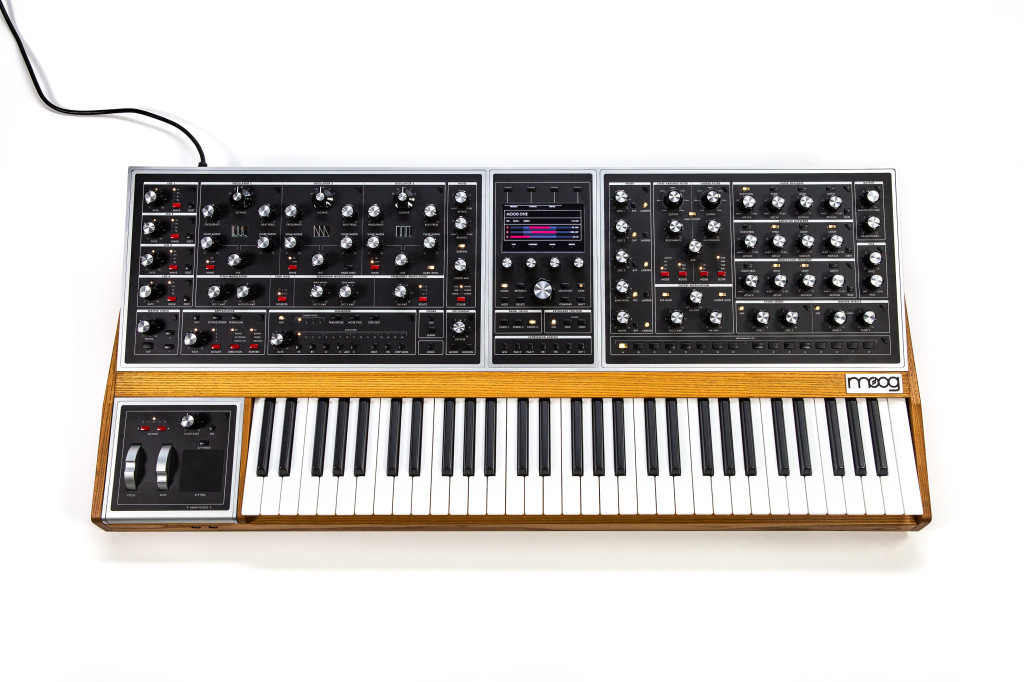 The last time Moog made a polysynth, Ronald Reagan was President, the Space Shuttle was the epitome of futuristic, MIDI wasn’t really even a thing, and to slightly misquote Douglas Adams, people were “so amazingly primitive that they still thought digital watches were a pretty neat idea.”

And let’s be honest. While Moog have been studiously revisiting the evolution of their polyphonic instruments, Moog are known for their monosynths, not polysynths. This could change that. Sure, the Moog One is expensive – you might still choose a poly from Novation, KORG, Arturia, or fellow American brand Sequential (now renamed to its original moniker from Dave Smith Instruments).

But it’s also beautiful, and deep. It’s going to top the wanted list of rockstars again, maybe in a way we haven’t seen since the 80s – as proven by the promo video (some of which feature those same 80s synth superstars). If we still cared about print magazines graced by keyboard covers, this would have a glossy special edition devoted to it with a pull-out centerfold that let you lie in bed and stare at its front panel on your ceiling.

As for the “One” part, well, that’s more about it being the one, as in:

— well, except instead of Wayne, apparently Suzanne Ciani and Chick Corea reached that conclusion.

And given the price is $6k or $8k list, you’ll probably want to know more. So Moog are doing a first-ever AMA (Ask Me Anything) on Reddit:

Plus there’s a live stream of them building these (with another discussion to follow):

So, what’s the big deal about this big synth?

It’s really the blockbuster follow-up to everything Moog have been doing – take the Minimoog Voyager, then make each single analog signal path more powerful, multiple that times 8- or 16-voices (depending on which model you buy), and then turn that into three independent polysynths.

That is, the “tri-timbral” part means that you could think of this as three analog polysynths in one. Each timbre can be addressed separately, with its own sequencer, its own arpeggiator, and its own set of effects. 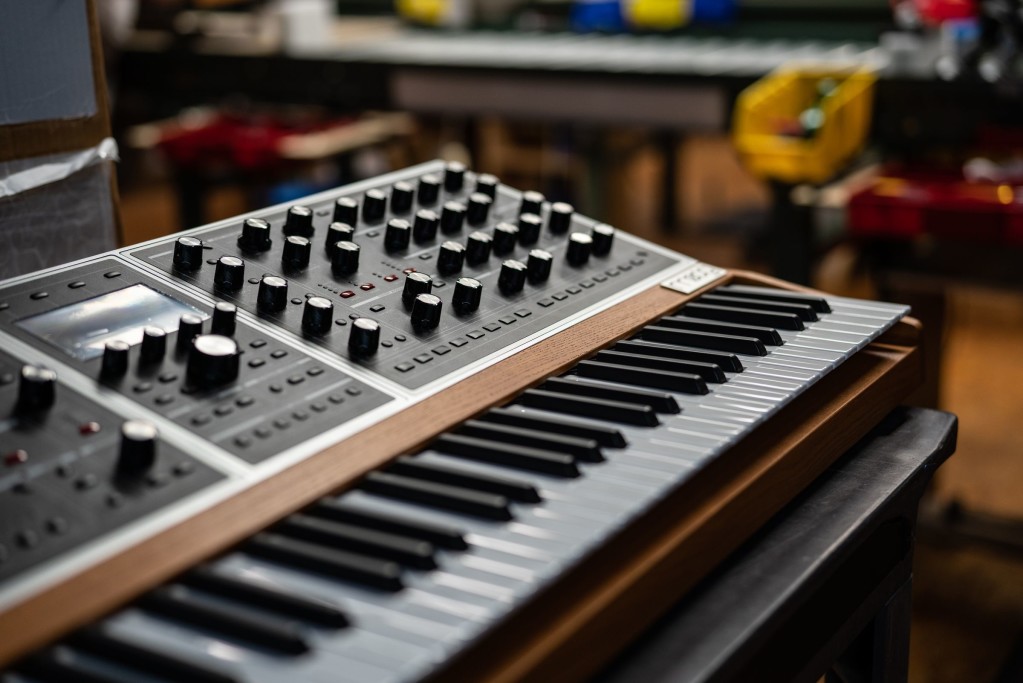 Some interesting notes from Amos Gaynes on the Reddit AMA – no MPE at launch, but it is planned (for polyphonic expression – ideal for this polysynth). And they do envision this as a technology platform, meaning this stuff may well trickle down to more products soon.

Now, all of this matters, if you think about it.

What’s the reason people are into hardware? Easy: hands-on control. And this has a lot of it.

But why are people also buying modular? Well, in part, at least, they want deeper sound design possibilities – complex modulation that allows more sound worlds. And this does deliver a lot of that via its voice architecture and modulation offerings.

Why did manufacturers start making keyboards and not only modulars – even for people who had been big modular users? That’s easy, too – modulars don’t give you instant performance recall, and they’re (by definition) not integrated instruments. This does both of those things. 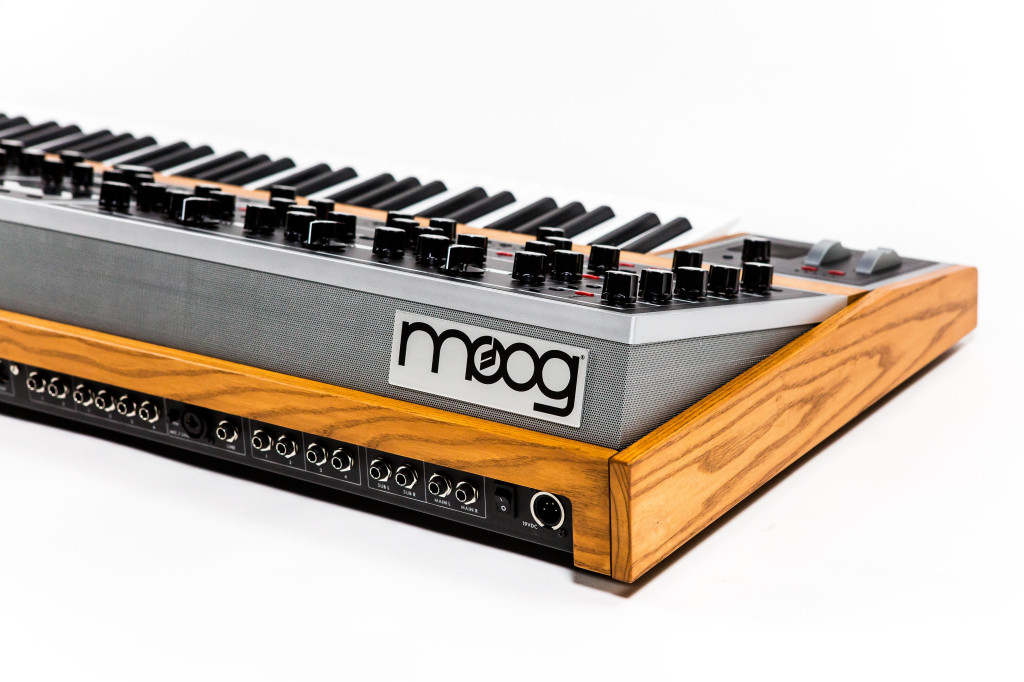 But we also see the advantage of time. We’ve come full circle to lots of one-to-one performance controls. But we also can take advantage of an integrated display, without trying to use it to replace knobs and switches. We’ve become more allergic to menu diving and hidden features. And computers have made us demand more of hardware – like those instant-assign destination buttons. This is a Moog for a time when hands-on control and depth aren’t mutually exclusive.

I wanted to know more about how the Moog One came about and how you play it, so here are some answers to those questions – though for more, of course, you can join the AMA thread.

Making a new polysynth was unsurprisingly on the minds at Moog. “Moog has a long history of polyphonic synthesizer development, beginning with the Moog Apollo project in 1973,” Moog tells CDM. “Although the Apollo never moved beyond the prototype stage, Keith Emerson’s use of the newly designed instrument during ELP’s Brain Salad Surgery Tour provided Moog with valuable feedback for the release of the Polymoog in 1975. During this 10 year span, 6 different takes on a polyphonic instrument where created, ending with the Moog SL-8 prototype in 1983.” 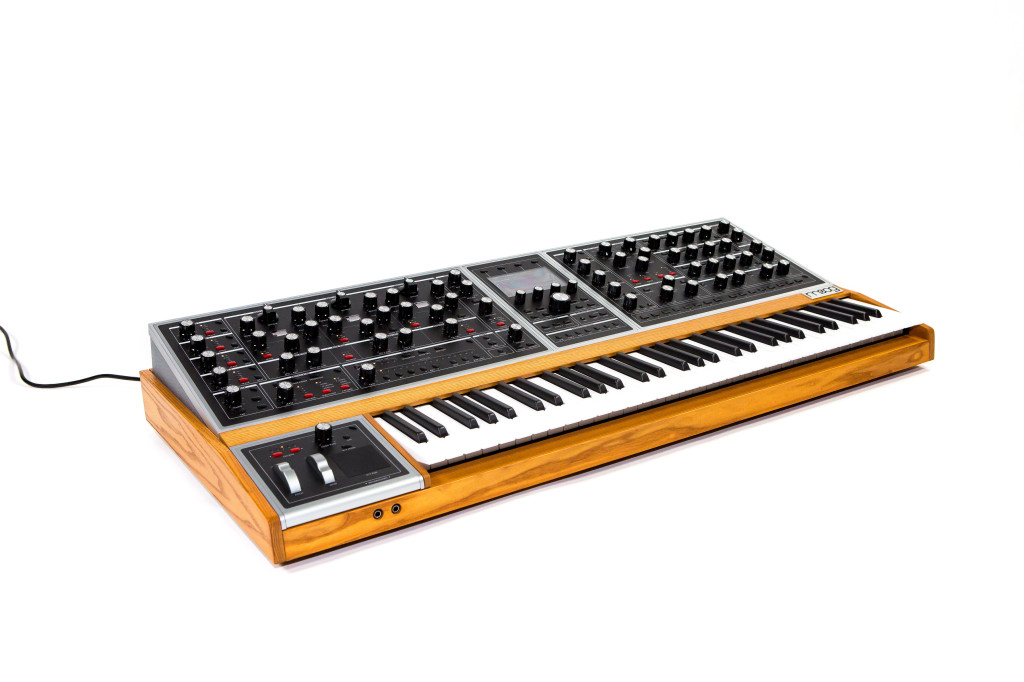 Players have never stopped asking for polys, nor has the idea ever died, Moog tell us. Some resistance came from founder Bob Moog himself, however: “In his later years, Bob was not keen on the idea of a new Moog polyphonic synth, knowing firsthand the challenges of creating one, but over the years we have been able to substantially reduce costs and have increased the stability of our analog designs to the point that creating an analog poly no longer seemed out of reach.”

So when did the Moog One start to come into being. “Officially, we began the research phase in earnest in 2013,” say Moog, “talking with artists and creators about what their vision of the ultimate Moog synthesizer would be.”

“By 2016,” Moog says, “we had the first hardware prototypes for the circuitry, with the first stages of a working Moog One prototype taking form in early 2017. Now that the Moog One has been realized, we only wish that Bob Moog was here to play the first chord.”

Okay, so how does it actually work, though? More details:

Each of the Moog One’s 4 LFOs and 3 EGs have their own dedicated Destination Buttons for making modulation quick assignments on the front panel. Simply press the Destination on any LFO or EG, and the next knob you touch will set the modulation destination and amount.

For a modulation deep dive, the onboard Modulation Matrix provides immediate visual access to every possible combination of Moog One’s modulation sources, destinations, controllers, and transforms. The Modulation Matrix makes it easy to quickly program complex modulation paths while also giving an overview of all the modulation routings that have been set up in a given Preset. 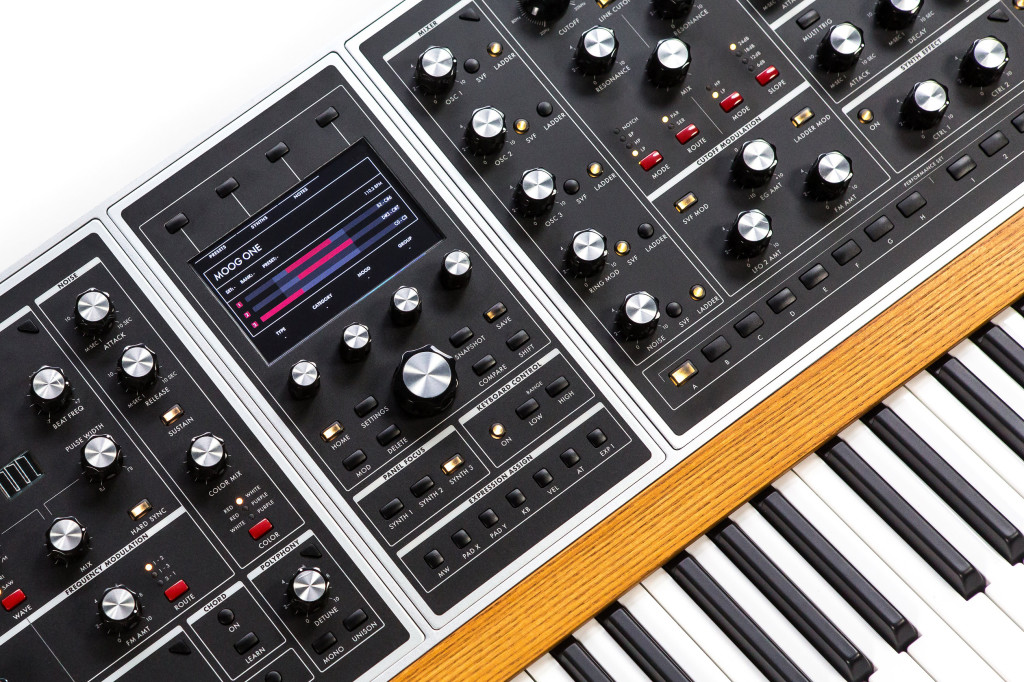 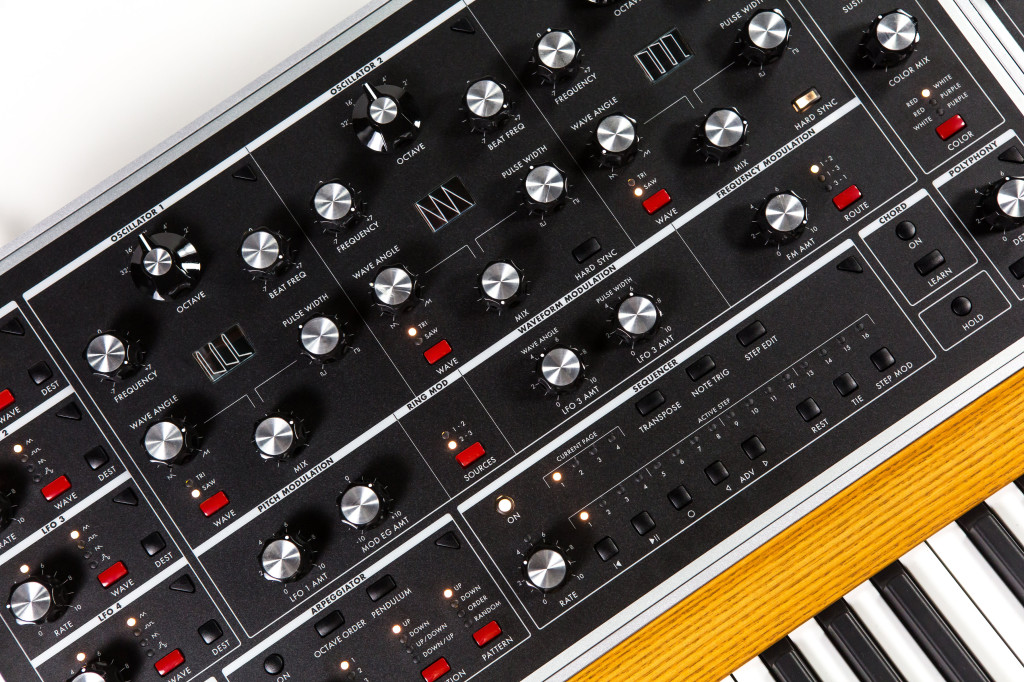 What about the Eventide reverbs?

It sounds like two come from favorite algorithms known on the Eventide SPACE and related products:

Moog One was developed to explore what is possible in a polyphonic synthesizer, and Eventide’s breath taking reverb technology was the right fit. The Room, Hall, Plate, Blackhole, and Shimmer reverbs are all implemented using Eventide’s world-class algorithms with a few optimizations for use in Moog One.

A direct connection to service

There are some other changes coming, too. Moog are adding a chat feature so during business hours – 9-5 Monday through Friday Eastern Time – you’ll be able to ask questions of Moog staff in North Carolina, in real-time. (They’re quick to remind us those are “employee owners.”)

And there’s also that mysterious Ethernet port on the Moog One. From day one, it’s there for remote diagnostics and service. But more is coming:

Now, when a musician experiences issues that typically would require shipping an instrument back to the Moog factory, we are instead able to access their Moog One remotely and run a series of tests, calibrations, and whatever else may be necessary to best service their instrument remotely, which is a huge advancement and time saver for customer, dealer and manufacturer. While we can’t talk specifics regarding future product development, we can tell you that we have plans for the Ethernet port that will open new portals of creativity for Moog One owners. 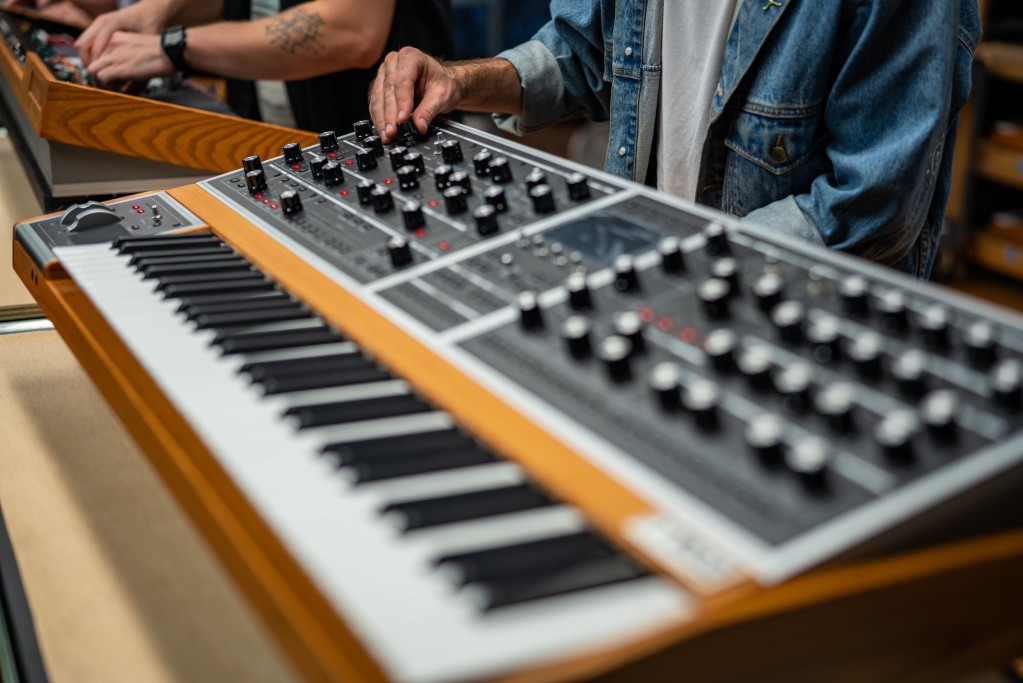 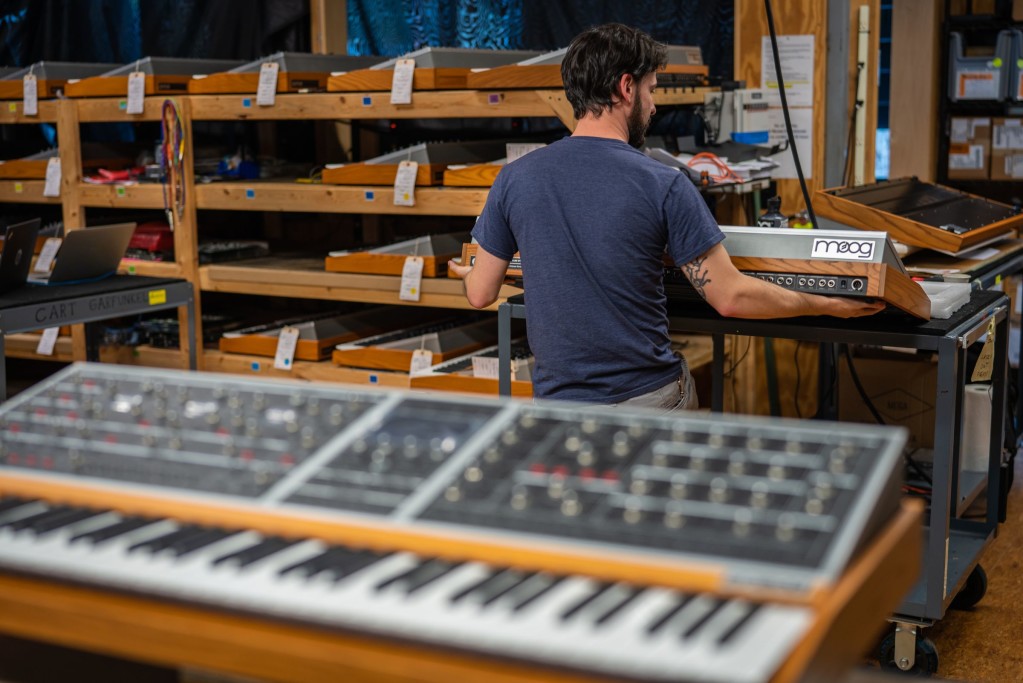 Above, top: inside the Moog factory, as the first Moogs One are completed.

Moog One is out now, for real:

As of today, Moog One is available for order through all authorized Moog Dealers world wide. You can actually watch us building the Moog One right now through the live-stream player on the Moog website. Sweetwater will receive the first 150 units over the next few weeks, and we expect to begin shipping the Moog One to all US dealers in November, with international shipments starting shortly there after.

And what about those of us with budgets the Moog One doesn’t fit?

When we began development of the first polyphonic Moog analog synthesizer in over 35-plus years, we wanted it to be a dream-synth that pushed the limits of what is technically possible while still being an intuitive instrument for self-expression. This year we’ve released DFAM, Grandmother, and the Moog One, which are three instruments that cover a wide range of creative possibilities.

That’s fair, I think. As I’ve observed before, Moog have kept a range of products in reach of those on a budget – down to very affordable iPad/iPhone apps, but also including this other hardware. They’re releasing a fair number of products for a mid-sized manufacturer (compared to tiny boutique shops at one end, or mighty Japanese makers at the other). And since they first came up with their crazy Keith Emerson modular relaunch, while we have seen big-ticket rockstar items, those do appear to drive creation of more affordable analog gear and other devices and apps for the rest of us. 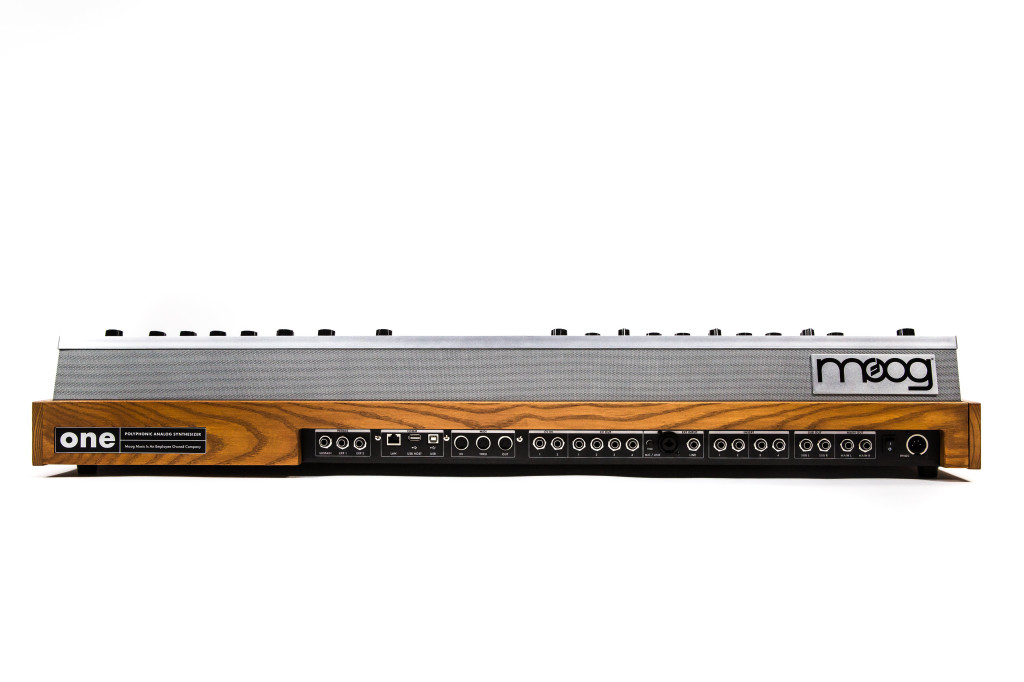 Control all of Ableton from iOS, Android, Windows: touchAble Pro

The 1976 Polymoog film reminds us of when polysynths were new