Roland’s revised VT-4 – the replacement for the first AIRA VT-3 – makes it look like someone finally gets what vocalists want in effects. More effects options, actual control over harmony, and MIDI could make all the difference.

The original VT-3 is a little too simple to recommend. A big dial locks you into some stock effects, without any parameter controls beyond pitch and formant. But at the same time, it is unusually direct and accessible, and it doubles as a USB interface, meaning for singers it’s carry-on luggage friendly. So as a cheap, fun effect, it does have potential. It’s cheap on the used market, but then so are a number of pedals.

Roland have apparently been listening, though. Just as the fun but simplistic TR-8 was replaced with the sample-loading, all-around improved TR-8S, so to the VT-3 has gotten a revamp. The Slimer-green trim is gone, but more importantly, you now can control the way it sounds, via expanded effects options and controls. And it does MIDI input. 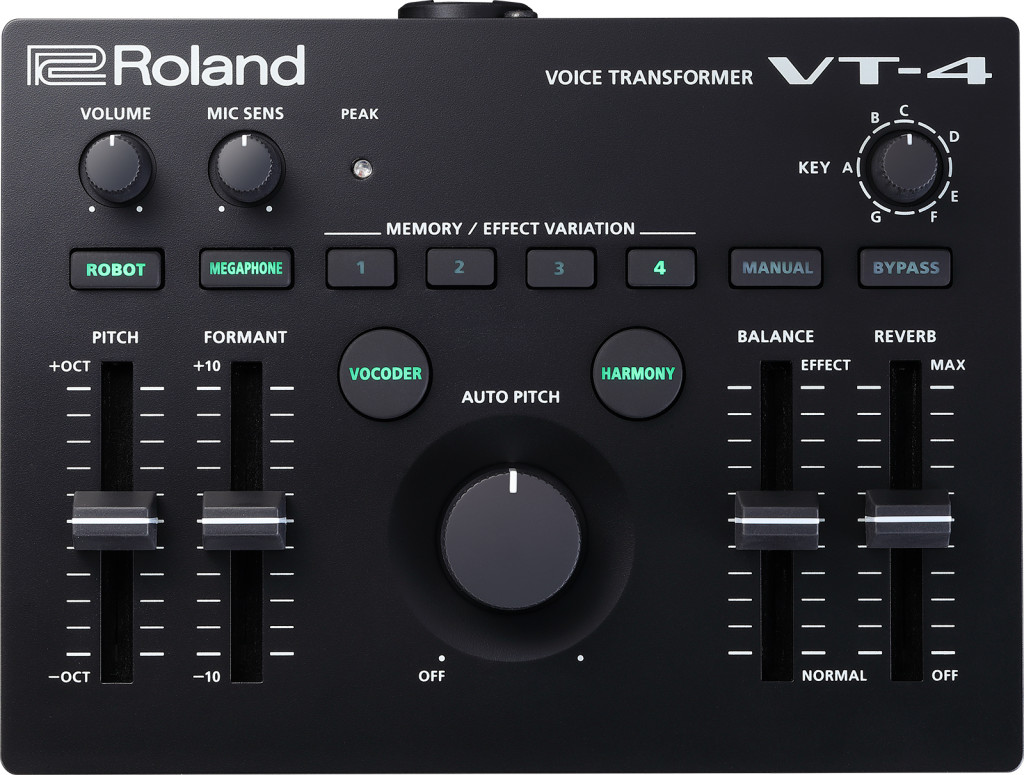 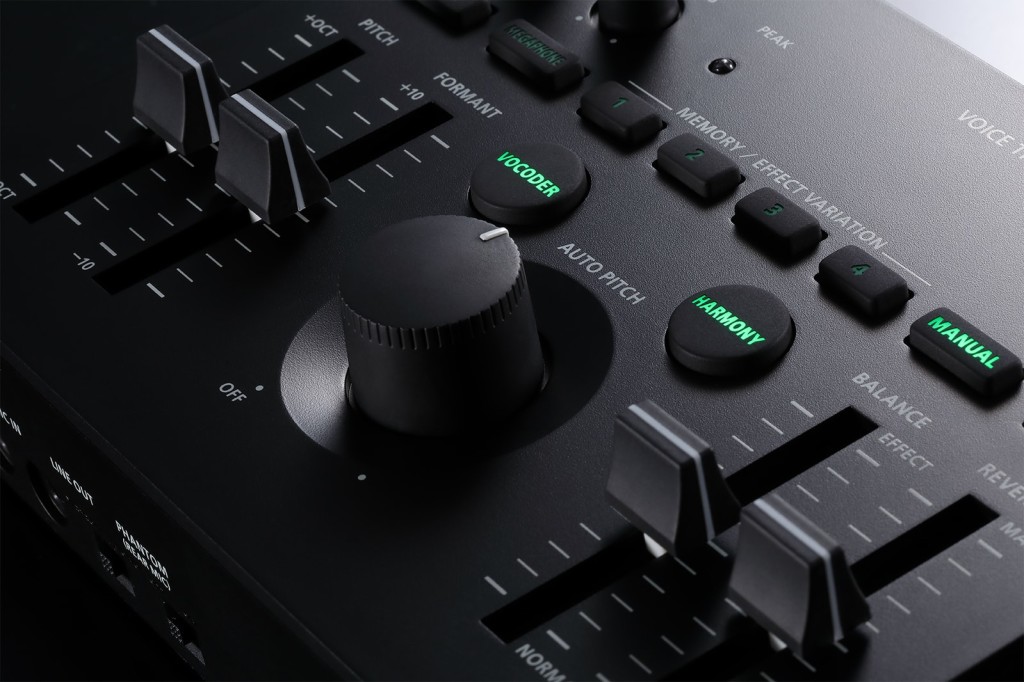 Here’s the thing: there are lots of great sounding vocal effects out there, but none of them seems designed with singers in mind. They fit into two categories: pedals that seem to have been created by guitarists, or “studio” boxes that have way too much menu diving. (If you can think of an exception, shout in comments.) The VT-3 was already significant in that it was live friendly. Now the VT-4 fills in the gaps the VT-3 left open.

It’s finally what you want to sing with, whether you’re a great singer or can barely sing at all – direct access to effects, performance-friendly controls. Singers don’t necessarily want to have to do everything with their feet or in pages of menus. This hardware’s designers seems to understand that.

From the VT-3, and still a good idea: 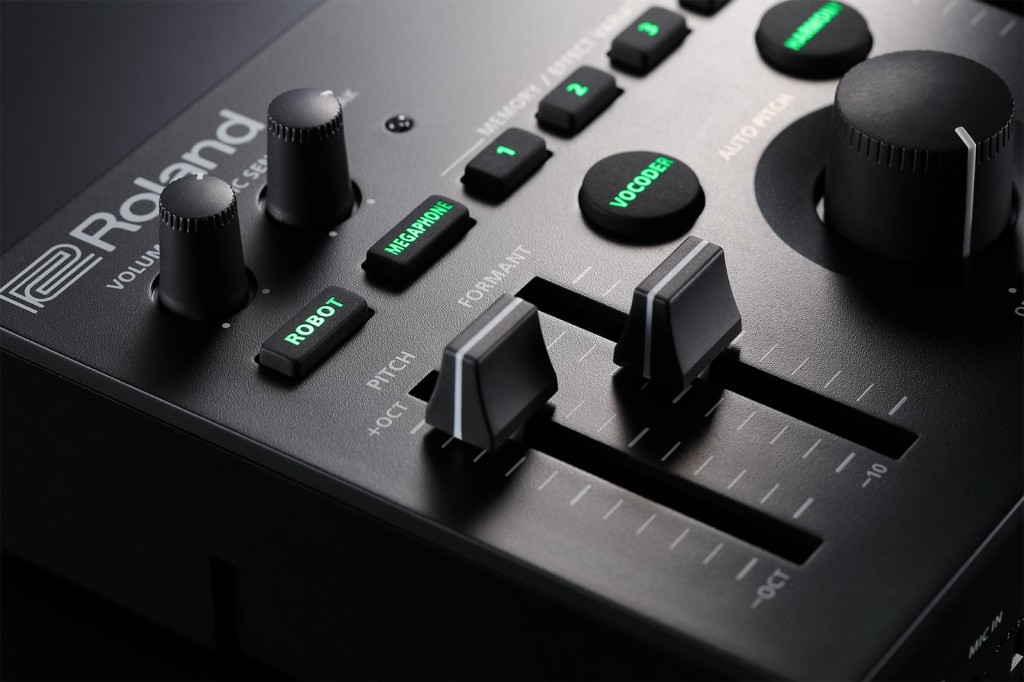 It’s the effects that appear to be totally overhauled. The only variations on the VT-3 are printed directly around the dial – as in, you get two alternatives for the auto pitch, and that’s it.

On the VT-4, there’s a whole slew of effects hidden behind the variation buttons. (Those buttons still double as preset storage and recall, so what you’ll likely do is explore to find the ones you like, then lock them in at the top.)

There are still some toy-like presets as on the VT-3 – though some of those are interesting for processing drums and the like. In addition, though, you also get a bunch of new, musical effects, and enough variations that you can dial in what you need.

There’s a chorus effect (categorized inexplicably as “megaphone.”) There’s a model of the classic Roland VP in the vocoder, along with talk box, advanced, and Speak & Spell (sorry, trademark – “spell toy”) variations. The Harmony option lets you choose intervals (fifth, third, forth below, and combinations, though you can also use MIDI for more). Even robot has octave options and a new feedback variation.

Also, that fixed “reverb” is now really a multi effects unit – reverb, echo, synced tempo delay, and dub echo are now available. I’d likely buy it for those upgrades alone, but then you can also use a MIDI keyboard as input to control pitch.

Now, what the VT-4 is not – it’s not a one-box solution for everything you might need. There are more powerful multi-effects units, and there are loopers. Since it’s neither of those, you might need to tote another piece of gear depending on how you play.

I need to research more how multiple effects work and exactly how these models relate to those available on the VT-3 and other Roland AIRA and Boutique series models. But generally these days Roland are constantly improving their modeling and sounds, thanks to architectures that are more flexible than those of the past.