If you snoozed on some deals this weekend, and you’re longing to build out your software arsenal, erm, legally, it’s not too late. Here are some of the best deals we missed over the weekend plus some Cyber Monday news.
leix
And yes, if you think I’d do this just as an excuse to run an image of some Cybermen, vintage ones looking like BBC actors dressed in a combination of balaclavas and some combination of hardware store parts that make it look like they have an air conditioner strapped to their chest, oh absolutely I would.

Ah, back to deals.

pluginboutique.com continues the sale of the weekend with a bunch of Monday “flash” deals. That includes ROLI’s wonderful new Cypher2 synth on sale, Softube Tape for thirty bucks, and many others – plus loads of plug-ins are $1 or free meaning you can go shopping for next to nothing or actually nothing. Also, pluginboutique.com’s site is up, which isn’t always the case with some of these flash deals from plug-in developers, so they’re a good place to check out.

Some examples:
Loopmasters Studio Bundle at 90% off, or $132 for a bunch of stuff.

The beautiful Sinevibes creations for 30% off.

Harrison make wonderful consoles. Now Mixbus was already kind of ridiculously affordable – US$79 buys you a full console emulation that’s great for mixdowns and mastering and the like. But for Cyber Monday, that’s a “okay, you have to buy this” $19, which is just stupidly good. Alternatively get Mixbus plus 5 plug-ins for $39. They didn’t pay me to say that, either; at those prices, I don’t imagine they have much marketing budget!

Enter code CYBERMON18 when you shop their store.

Trakction are back with 50% off everything today only. Try entering code EPIC2018, too.

Spitfire Audio have Black Weekend sales still going – think 25% off individual products, or up to 77% off of collections, for their unique and delightful sound libraries.

Sugarbytes have everything on sale: EUR69 plug-ins, EUR333 bundle, plus up to 50% on iOS Apps.

Propellerhead have a huge Cyber Monday sale, and with loads of big discounts on Reason add-ons and the cheapest ever price on an upgrade, it’s nice fodder for their loyal users. Euclidean rhythms, the KORG Polysix, the Parsec “spectral synth,” the Resonans physical modeling synth – some serious goodies there on sale. And €99 for the upgrade means you can finally stop putting off getting the latest Reason 10. (Not only is VST compatibility in there, but the Props have done a lot lately on usability and stability meaning now seems a good time to jump for Reason users.)

Eventide have their software on sale through the end of the month. This is really the most affordable way to get Eventide sound in your productions (short of a subscription deal).

Anthology XI for US$699 instead of the usual $1799 is especially notable. Having those 23 plug-ins feels a bit like you’ve just rented a serious studio, virtually.

If that’s too much to budget, consider also the new Elevate Bundle – makes your sounds utterly massive, and the three do fit well together, so $79 is a steal.

There’s also the excellent H3000 delay on steep discount, and the luscious Blackhole reverb for just $69. (Or for more studio reverb sounds, the ‘Heroes’/Visconti-inspired Tverb for $99.) And of course the rest of the lineup, too.

Updated! Universal Audio keeps their 12 Days of UAD sale running, and since I mentioned it over the weekend, it’s gotten juicier. There’s the Fender ’55 Tweed Deluxe amp at 50% off for 99 USD/EUR, the Lexicon 224 is 50% off at 149, the invaluable Teletronix limiter set is also half off for 149 USD/EUR, and lastly, my all-time desert island plate reverb, the UA model of the EMT 140 is just ninety nine bucks, too.

Waves had a big sale over the weekend, but for Cyber Monday they also have a new synth – the Flow Motion FM Synth. This crazy UI is certainly a new take on making FM easier to grasp, and it’s got an intro price of US$39. (I have no idea how good it is as I haven’t tried it yet, but they’ve got my attention – and NI aren’t shipping the new Massive yet, so Waves gets in here first with their own hybrid take!) And Waves are doing a buy 2 get 1 free deal, as well. 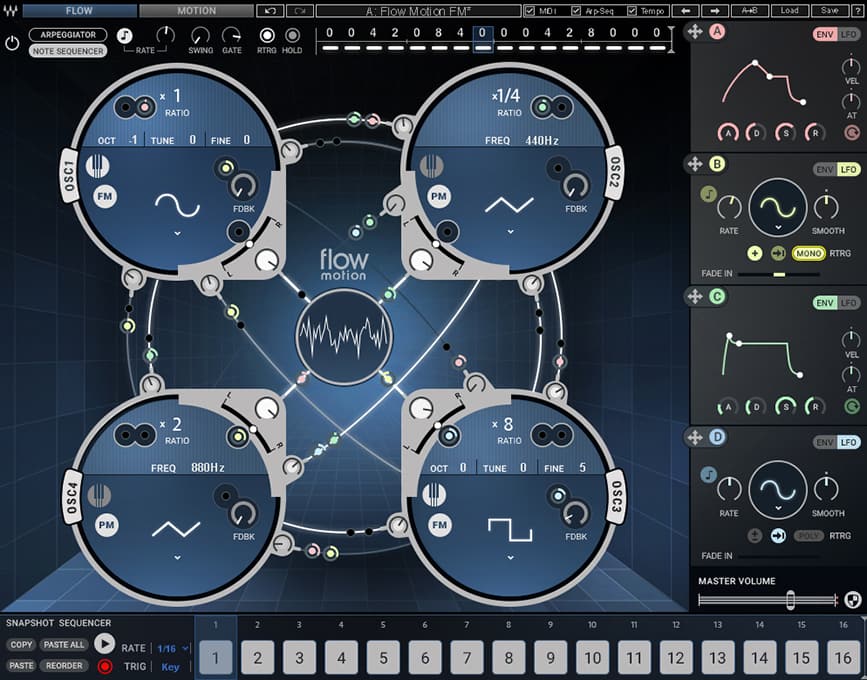 After introducing a vocal plug-in over the weekend, Waves are using Cyber Monday for a product launch, too – the Flow Motion FM synth seen here.

Updated! Wait, there’s still another Waves freebie, an easy-to-use, instant analog-style compressor with “punch.” (It’s an older plug-in, but that generally means lighter on CPU which can also be useful – especially live. See this review.)

Output have added a 25% off discount on their software, even including their already discounted bundle, for Cyber Monday.

Steinberg have a big sale this week, including apps, with up to 60% off. That’s a big deal for fans of their production software and plug-ins, but also take note that their terrific mobile app Cubasis – perhaps the most feature-complete DAW for iOS – is half off, as is the Waves in-app purchase for the same.

App lovers, it’s worth checking the Android App Store / Google Play as a bunch of stuff is on sale now – too much to track, probably. But some top picks this week: Imaginando’s Traktor and Live controllers, iOS and Android, are all 40% off – everything.

Puremagnetik have US$10 Cyber Monday deals – $20 each, then enter code BLACKFRIDAY18 for 50% off on top of that – so ten bucks for String Machines XL, Retro Computers +, and Soniq’s classic synths.

Still going… A lot of the deals I wrote up over the weekend are still on, including Arturia and Soundtoys.

Native Instruments have a 50% off sale still going. Tons of stuff in there, but Reaktor 6 for a hundred bucks – full version, meaning you don’t need a past version – that’s insane. That’s a hundred bucks to buy you what could be the last plug-in you ever need.

IRRUPT/audio have a 50% off deal on their unique sound selection if you enter code IRRUPT-VIP.

Need to learn things and not just buy them? Askvideo/Macprovideo have a deal for today only with US$75 for a yearly pass (the price that usually gets you just three months), or 75% off all à la carte training.

And SONAR+D in Bacelona has a 200EUR delegate pass sale today only.

Some of the deals are expiring, but some last through today or through Friday (with a few straggling into December), so check out previous guide and guide to other guides:

And still more deals in spreadsheet form over at Rekkerd –

You can now add VST support to VCV Rack, the virtual modular