Dark, crunchy, synthetic sounds, grooves that morph somewhere in the shadows between bass line and percussion pattern – Ruismaker Noir is exactly the sort of drum machine you’d want with you at all times. And as it’s an iOS app, you can take it with you.

Here’s the idea: what if the drum synth were also a monophonic synth? And what if you could morph between those, for basslines that start to get edgier and more rhythmic, or rhythmic lines that start to get more melodic? And what if you had an integrated sequencer so you could mess with both of those at once (including all the mighty morphing modulation)? Well, uh, obviously the answer to that would be yes, please, I would want that.

Noir is the latest in the Ruismaker line from Dutch developer/designer Bram Bos. Bram has had a series of synthesis-focused drum machine apps for iOS mobile, and as if that weren’t already enough experience for you, he has a long history of plug-in development dating back to one of the first software drum machines ever.

But that’s the thing about developing electronic instruments – it’s often not about a single breakthrough but lots and lots of iteration. So Noir is the most full-featured of the Ruismaker series yet, but also reaches a new level of playability and sound. Sorry, that sounds like marketing copy, but having used Bram’s stuff over the years, I mean that from first-hand experience – I’ve watched him add those details and refine ideas as he goes. 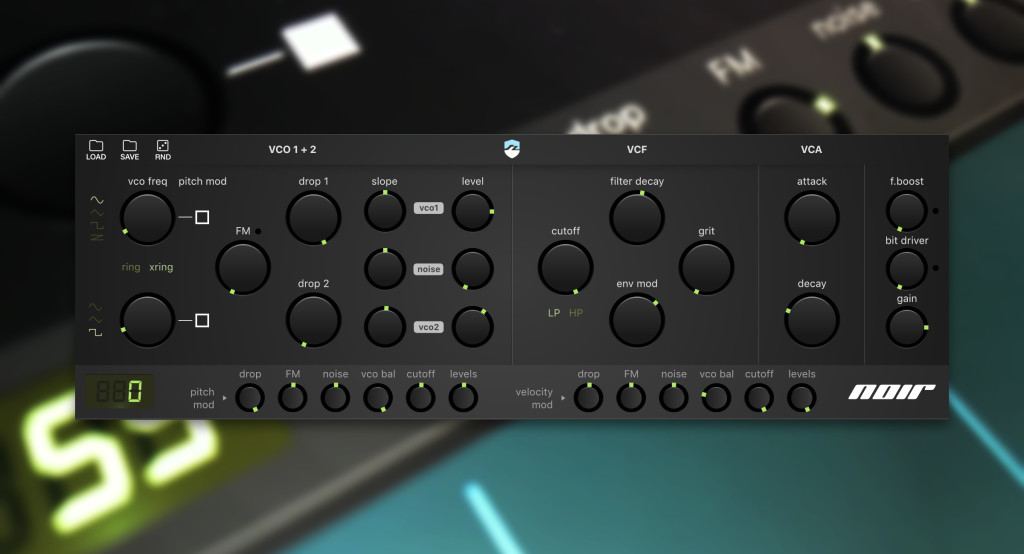 And it comes at the right moment. You hear a lot of these sort of aggressive, synthetic sounds (uh, winter is coming for the northern hemisphere). But a lot of people use modulars to get them, which means you need a modular rig and some time in the studio. (Time, money, space … uh oh.) Plus, having this in an iPad app with an intuitive touch sequencer will also be a far shorter path to articulating a groove that’s in your head for a lot of people. And the results here are distinctive enough that even if you do have that modular rig, you might tinker around with this anyway.

You can also use a standalone mode to fine-tune presets, then jam with the plug-in later.

It’s built as a plug-in, so you can use it with DAWs like Cubasis, Garage Band, and Modstep. Or combine it with other drum machines like Elastic Drums for some serious drum mayhem.

This whole thing packs a lot into one app. There’s a full MIDI implementation, which means you could even make a hardware controller mapping if you like. But it’s also nice that the internal sequencer will do the job if you don’t want to switch back and forth to an app.

I have a feeling I may not sleep on my flight back from the USA to Germany as I’ll get sucked into playing with this. See you on the flipside.

Conversations and an overflow of music, streaming from Ableton Loop