From countries across Europe to the USA, migration is at the center of Western politics at the moment. But that raises a question: why aren’t more people who make music, music instruments, and music tech louder about these issues?

Migration – temporary and permanent – is simply a fact of life for a huge group of people, across backgrounds and aspirations. That can involve migration to follow opportunities, and refugees and asylum seekers who move for their own safety and freedom. So if you don’t picture immigrants, migrants, and refugees when you think of your society, you just aren’t thinking.

Musicians ought to be uniquely qualified to speak to these issues, though. Extreme anti-immigration arguments all assume that migrants take away more from a society than they give back. And people in the music world ought to know better. Music has always been based on cultural exchange. Musicians across cultures have always considered touring to make a living. And to put it bluntly, music isn’t a zero sum game. The more you add, the more you create.

Music gets schooled in borders

As music has grown more international, as more artists tour and cross borders, at least the awareness is changing. That’s been especially true in electronic music, in a DJ industry that relies on travel. Resident Advisor has consistently picked up this story over the last couple of years, as artists spoke up about being denied entry to countries while touring.

In a full-length podcast documentary last year, they dug into the ways in which the visa system hurts artists outside the US and EU, with a focus on non-EU artists trying to gain entry to the UK:

Andrew Ryce also wrote about a visa rate hike in the USA back in 2016 – and this in the Obama Administration, not under Trump:

Now, being a DJ crossing a border isn’t the same as being a refugee running for your life. But then on some other level, it can allow artists to experience immigration infrastructure – both when it works for them, and when it works against them. A whole generation of artists, including even those from relatively privileged Western nations, is now learning the hard way about the immigration system. And that’s something they might have missed as tourists, particularly if they come from places like the USA, western Europe, Australia, and other places well positioned in the system.

The immigration system they see will often come off as absurdist. National policies worldwide categorize music as migrant labor and require a visa. In many countries, these requirements are unenforced in all but big-money gigs. But in some countries – the USA, Canada, and UK being prime examples – they’re rigorously enforced, and not coincidentally, the required visas have high fees.

Showing up at a border carrying music equipment or a bag of vinyl records is an instant red flag – whether a paid gig is your intention or not. (I’m surprised, actually, that no one talks about this in regards to the rise of the USB stick DJ. If you aren’t carrying a controller or any records, sailing through as a tourist is a lot easier.) Border officials will often ask visitors to unlock phones, hand over social media passwords. They’ll search Facebook events by name to find gigs. Or they’ll even just view the presence of a musical instrument as a violation.

Being seen as “illegal” because you’re traveling with a guitar or some records is a pretty good illustration of how immigration can criminalize simple, innocent acts. Whatever the intention behind that law, it’s clear there’s something off here – especially given the kinds of illegality that can cross borders.

This is not to argue for open borders. There are times when you want border protections. I worked briefly in environmental advocacy as we worked on invasive species that were hitching a ride on container ships – think bugs killing trees and no more maple syrup on your pancakes, among other things. I was also in New York on 9/11 and watched from my roof – that was a very visible demonstration of visa security oversight that had failed. Part of the aim of customs and immigration is to stop the movement of dangerous people and things, and I don’t think any rational person would argue with that.

But even as a tiny microcosm of the larger immigration system, music is a good example of how laws can be uneven, counter-intuitive, and counterproductive. The US and Canada, for instance, do have an open border for tourists. So if an experimental ambient musician from Toronto comes to play a gig in Cleveland, that’s not a security threat – they could do the same as a tourist. It’s also a stretch of the imagination that this individual would have a negative impact on the US economy. Maybe the artist makes a hundred bucks cash and … spends it all inside the USA, not to mention brings in more money for the venue and the people employed by it. Or maybe they make $1000 – a sum that would be wiped out by the US visa fee, to say nothing of slow US visa processing. Again, that concert creates more economic activity inside the US economy, and it’s very likely the American artist sharing the bill goes up to Montreal and plays with them next month on top of it. I could go on, but it’s … well, boring and obvious.

Artists and presenters worldwide often simply ignore this visa system because it’s slow, expensive, and unreliable. And so it costs economies (and likely many immigration authorities) revenue. It costs societies value and artistic and cultural exchange. 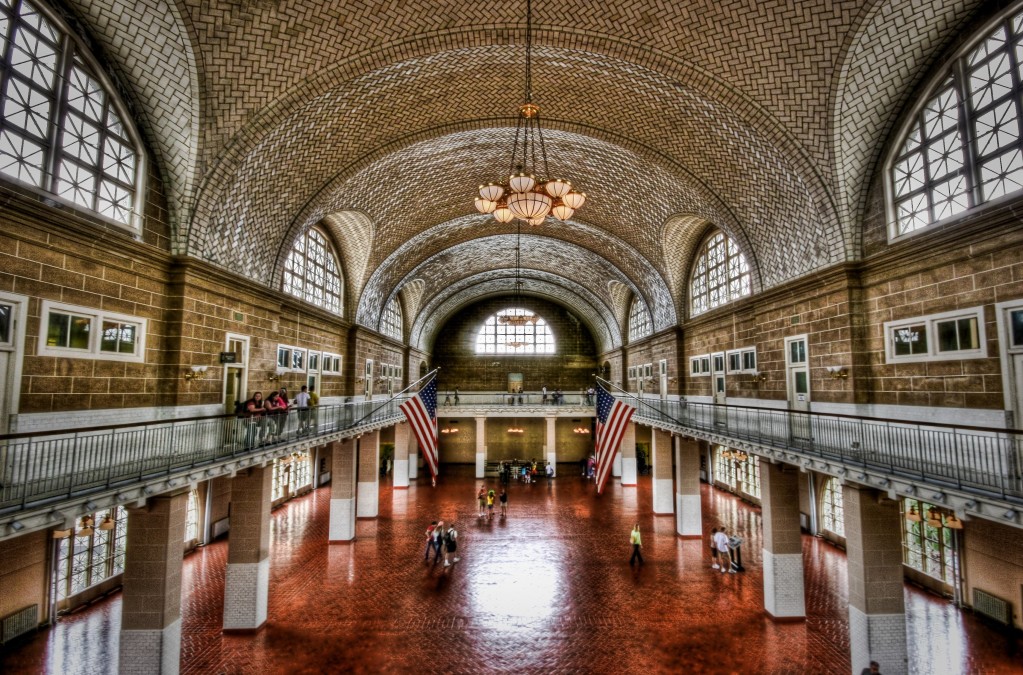 Ellis Island, NYC. 12 million people passed through here – not all of my family who came to the USA, but some. I’ve now come the other way through Tegel Airport and the Ausländerbehörde , Berlin. Photo (CC-BY-ND
“>A. Strakey.

Immigration advocacy could be seen as something in the charter of anyone in the music industry or musical instruments industry.

Music technology suffers as borders are shut down, too. Making musical instruments and tools requires highly specialized labor working in highly specialized environments. From production to engineering to marketing, it’s an international business. I actually can’t think of any major manufacturer that doesn’t rely on immigrants in key roles. (Even many tiny makers involve immigrants.)

And the traditional music industry lean heavily on immigrant talent, too. Those at the top of the industry have powerful lobbying efforts – efforts that could support greater cultural exchange and rights for travelers. Certainly, its members are often on the road. But let’s take the Recording Academy (the folks behind the Grammy Awards).

Instead, their efforts seem to fixate on domestic intellectual property law. So the Recording Academy and others were big on the Music Modernization Act – okay, fine,
a law to support compensation for creators.

But while the same organization advocated on behalf of instruments traveling – domestic rules around carry-on and checked instruments – but not necessarily humans. So it could be that there’s more interest in your guitar getting across borders than people.

I don’t want to be unfair to the Recording Association – and not just because I think it might hurt my Grammy winning chances. (Hey, stop laughing.) No, I think it’s more that we as a community have generally failed to take up this issue in any widespread way. (I sincerely hope someone out there works for the record industry and writes to say that you’re actually working on this and I’m wrong.)

More than anything else, music can cross borders. It can speak to people when you don’t speak their language, literally. When music travels, emotion and expression travels – artists and technology alike.

I personally feel the impact of all of this, now having been seven years in Berlin, and able to enjoy opportunities, connections, and perspective that come from living in Germany and working with people both from Germany and abroad. I feel hugely grateful to the German state for allowing my business to immigrate (my initial visa was a business visa, which involved some interesting bureaucracy explaining to the Berlin Senate what this site is about). I’ve even benefited from the support of programs like the Goethe Institut and host governments to work in cultural diplomacy.

I’ve also had the chance to be involved writing in support of visas and financial backing for artists coming from Iran, Mexico, Kazakhstan, and many other places, for programs I’ve worked on.

And all of this is really a luxury – even when we’re talking about artists traveling to support their careers and feed themselves. For so many people, migration is a matter of survival. Now that we’ve lived the system, we have an added obligation to make it work for them. Sometimes the threats to their lives come from geopolitical and economic policies engineered by the governments we come from – meaning as citizens, we share some responsibility for the impact others have felt. But whether or not that’s the case, I would hope we feel that obligation as human beings. That’s the basis of international rule of law on accepting refugees and granting asylum. It’s the reason those principles are uncompromising and sometimes even challenging. Our world is held together – or not – based on that basic fairness we afford to fellow humans. If people come to where we live and claim their survival and freedom depends on taking them in, we accept the obligation to at least listen to their case.

Those of us in the music world could use our privilege, and the fact that our medium is so essential to human expression, to be among the loudest voices for these human rights. When we live in countries who listen to us, we should talk to other citizens and talk to our governments. We should tell the stories that make these issues more relatable. We should do what some people I know are doing in the music world, too – work on education and involvement for refugees, help them to feel at home in our communities and to develop whatever they need to make a home here, and make people feel welcome at the events we produce.

That’s just the principles, not policies. But I know a lot of people in my own circle have worked on the policy and advocacy sides here. I certainly would invite you to share what we might do. If you’ve been impacted by immigration obstacles and have ideas of how we help, I hope we hear that, too.

Some likely policy areas:
Supporting the rights of refugees and asylum seekers
Supporting refugee and asylum seeker integration
Advocating for more open visa policies for artists – keeping fees low, and supporting exchange
Advocating the use of music and culture, and music technology, as a form of cultural diplomacy
Supporting organizations that connect artists and creative technologists across borders

But I do hope that as musicians, we work with people who share basic beliefs in caring for other people. I know there’s no single “community” or “industry” that can offer that. But we certainly can try to build our own circle in a way that does.

Some examples from here in Berlin working on refugee issues here. I would argue immigration policy can find connections across refugees and migrants, asylum seekers and touring musicians, as everyone encounters the same larger apparatus and set of laws:

An exploration of silence, in a new exhibition in Switzerland