Mystical music for midwinter, with SO of Tokyo’s Labyrinth, more

The Northern Hemisphere’s darkest days make a good scene for music, whatever your spiritual/religious persuasion. So here we have some gorgeous sounds in this holiday week.

First, this mix sets the mood for your end of December about as well as anything could, I think:

I will write about the ongoing Dimension Series of mixes shortly – it was an honor to make the first episode of that myself, and ever since Oscar Gonzales and Static Discos have delivered a steady flow of some of my favorite musical inspirations of the year, with mix after mix from delightful friends.

This particular mix is the work of Satoshi Aoyagi, aka SO, Tokyo DJ and tastemaker of The Labyrinth.

Electronic music has this connection to the club, but that space can so easily become claustrophobic – literally, as well as aesthetically. It can be limiting, and the music can sound trapped. So it’s wonderful that Satoshi takes us outside of that trap, and rewires techno from industrial cliche to a deep trip into the woods. In his words:

After traveling some music styles, I found some good point in between Techno and House this year.

I had an inspiration from nature for this DJ mix when I was driving in the deep forest. At the time of sunset, it was cloudy and there was a lot of mist that day, which was so mystic, but a few kilometers later… the sky had got slightly clearer and in the end, I could see it full of stars, it was a beautiful moment.

Since I prefer to play outside more than a club, this kind of experience always gives me an inspiration to think about what I play. Usually, I play more melodic stuff but this mix is showing the dark, hard side of the point I found and tried to make one big smooth flow from beginning to the end. In the beginning, I started from atmospheric Dub-Techno and slowly changed to straight clear techno to the later half and got more energy.

I think that this piece could translate the image I had that day through the music. I hope you can enjoy the journey.

I also like what Static Discos’ Oscar has to say about this mix:

So gave us a special christmas labyrinth mix. i think that this one is really beautiful and profound in some way and the kind of recording you want to save and listen to years down the road… Jeez! the last track is soooo epic…

well, i’m really not sure if i can fully convey in mere words how powerful what the labyrinth means for many of us, but without a doubt, it’s a place where nature, sonics, people and artists come together to create something genuinely wonderful. so not much more to add… that’s it. a merry christmas to you all
big thanks to Satoshi Aoyagi for taking the time to produce this beautiful mix. also i just want to thank Russell, Yasuyo, and all the rest of the crew that created labyrinth. keep up the good work.

this mix is dedicated to my dearest friends Daniel, Mike, Joshua, Abby and Li: ¡Gracias por su amistad, amigxs! Also to my pals Hugo, David, Joy, Jenus and Javier.
Have a lovely time in the company of your beloved ones.

Traveling from Japan to the United States…

Chris Stack of ExperimentalSynth.com has always connected his love of synthesizers to deep-rooted musicianship on those instruments with both keys and strings. (Of course it’s a myth that synth love and instrumental love need to be separate.) So I really quite enjoyed this medley he’s made for his family – perfect if you’re resting off big Christmas dinners or holiday drinks with friends or whatever:

The songs here, Chris tells us, are on a Godin Multioud run through an Eventide H9. “[It’s] a modern version of an Arabic lute,” Chris says. “I found that xmas carols sound great on it. Especially (but not exclusively) the minor key ones.”

More on the pagan side of things, Chris and the local synth nerds of Asheville North Carolina played this far-out Solstice Jam to “send signals to the moon” – animistic space scientists, go…

“That’s Geary Yelton’s hand on the iPad at the beginning,” Chris tells us, and “there was a Haken ContinuuMini just off camera.” Look closely, and you’ll also spot Les Crookshank from End Times Modular on the Moog Guitar.

The black-and-white piano keys, alongside the continuous axis of the Continuum: 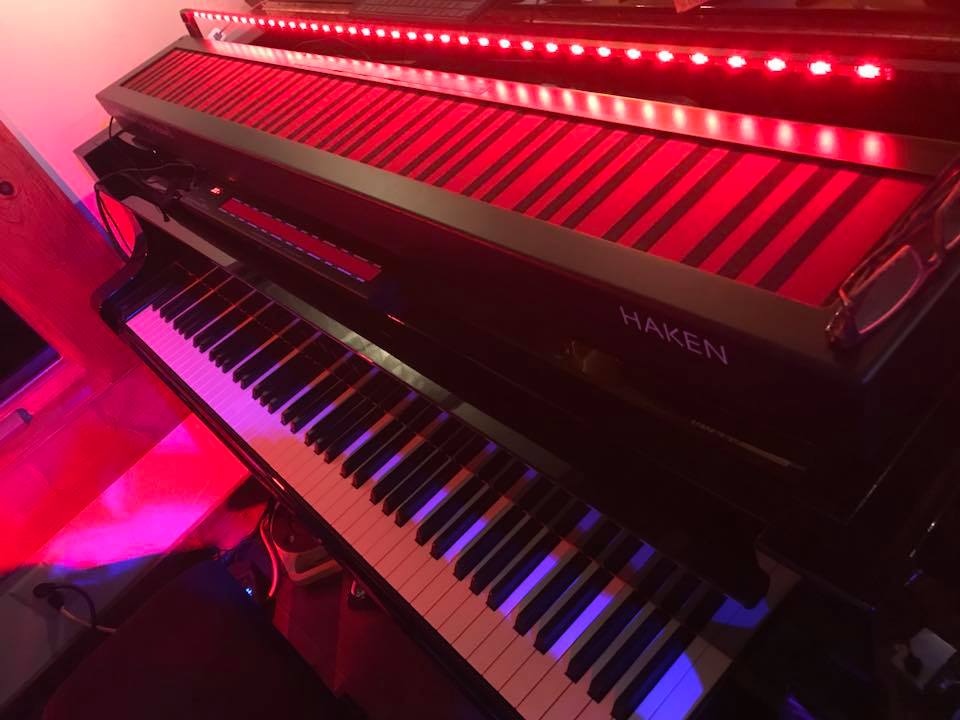 Explore sonic inspiration, via this artist’s approach to Novation’s Peak 1.2

Japan
Watch this Kazakh pop video for the maximum weirdness of Casio’s singing robot keyboard
Japan
Type in lyrics, and this keyboard sings them, as Casio returns to its Casiotone roots
inspiration
Celebrate your Blue Monday with the choir sound from New Order – and Kraftwerk’s Orchestron
inspirationlistening
Get lost in magical 1983 footage of Brilliant Trees, delicate IBM Dictaphone looping