What began as a niche field populated mainly by code jockeys has grown into a worldwide movement of artists, many of them new to programming. Onekey group, TOPLAP, celebrates 15 years of operation with live streams and events.

Image at top – Olivia Jack’s Hydra in action, earlier this month at our MusicMakers Hacklab at CTM Festival. We’ll be talking to Olivia over the weekend about live coding visuals, and you can catch her in Berlin tonight – or online – see below. 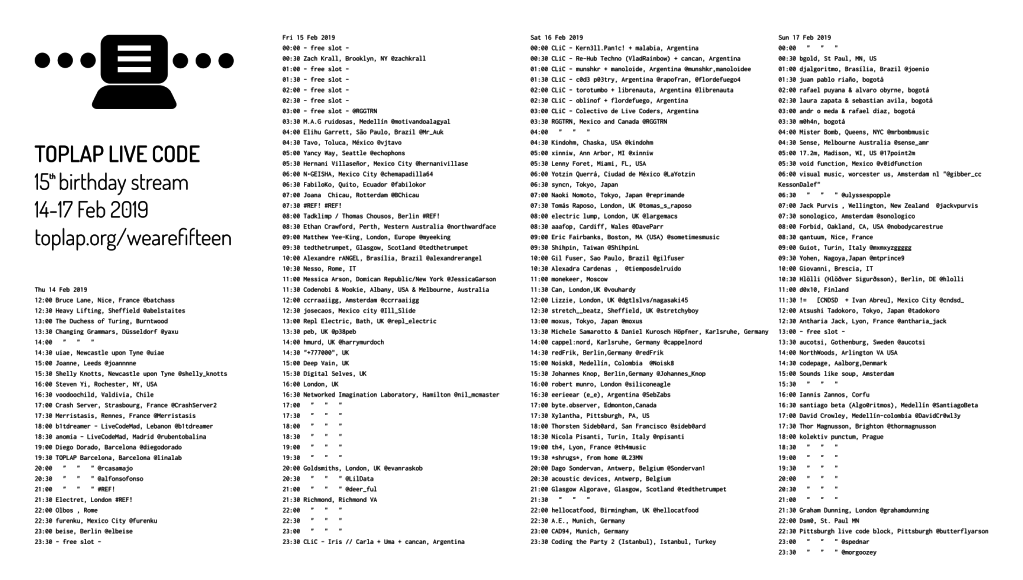 Live coding is about making live music, visuals and other time-based arts by writing and manipulating code. Recently it’s been popularised as Algorave, but is a technique used in all kinds of genres and artforms.

The open worldwide live coding community goes by the name of TOPLAP (Temporary Organisation for the Promotion of Live Algorithm Programming) was formed 15 years again (14th February, 2004) at an event called Changing Grammars in Hamburg.

Now this worldwide community is coming together to make a continuous 3.5 day live stream with over 168 half-hour performance slots..

There’s over 168 performances from 14th-17th February, quite a few beamed from local celebratory events being organised around the place (Prague, London, NYC, Amsterdam, Madison, Bath, Argentina, Richmond, Hamilton, …), and others by individuals who’ll be live coding from their sofa.

Anyone going to stay up to watch the whole thing?

Algorave and TOPLAP have made major efforts to be more gender balanced and inclusive and community driven – a topic deep enough that I’ll leave it for another time, as they’ve worked on some specific techniques to enable this. But it’s extraordinary what people are doing with code – and yes, if typing isn’t your favorite mode of control, some are also extending these tools to physical controllers and other live performance techniques. Live coding in one form or another has been around decades, but now is possibly the best time yet for this scene. We’ll be watching – and streaming. Stay tuned.

Teenage Engineering OP-1 synth is back in stock, here to stay