Grabbing the mouse, keyboard, or other controller while playing an instrument is no fun. Developer Geert Bevin has a solution: put an Apple Watch or (soon) iPhone’s Siri voice command in control.

We’ve been watching MidiWrist evolve over the past weeks. It’s a classic story of what happens when a developer is also a musician, making a tool for themselves. Geert has long been an advocate for combining traditional instrumental technique and futuristic electronic instruments; in this case, he’s applying his musicianship and developer chops to solving a practical issue.

If you’ve got an iPhone but no watch – like me – there are some solutions coming (more on that in a bit). But Apple Watch is really ideally suited to the task. The fact that you have the controller strapped to your body already means controls are at hand. Haptic feedback on the digital crown means you can adjust parameters without even having to look at the display. (The digital crown is the dial on the side of the watch that was used to wind and/or set time on analog watches. Haptic feedback uses sound to give physical feedback in the way a tangible control would, both on that crown and the touch surface of the watch face – what Apple calls “taptic” feedback since it works with the existing touch interface. Even if you’re not a fan of the Apple Watch, it’s a fascinating design feature.)

How this works in practice: you can use the transport and even overdub new tracks easily, here pictured in Logic Pro X:

Just seeing the Digital Crown mapped as a new physical control is a compelling tech demo – and very useful to mobile apps, which tend to lack physical feedback. Here it is in a pre-release demo with the Minimoog Model D on iPhone:

Or here it is with the Eventide H9 (though, yeah, you could just put the pedal on a table and get the same impact):

Here it is with IK Multimedia’s UNO synth, though this rather makes me wish the iPhone just had its own Digital Crown:

Version 1.1 will include voice control via Siri. That’ll work with iPhones, too, so you don’t necessarily need an Apple Watch. With voice-controlled interfaces coming to various home devices, it’s not hard to imagine sitting at home and recording ideas right when the mood strikes you, Star Trek: The Next Generation style.

Geert, please, can we set up a DAW that lets us dictate melodies like this?

It’s a simple app at its core, but you see it really embodies three features: wearable interfaces, hands-free control (with voice), and haptic feedback. And here are lots of options for custom control, MIDI functionality, and connectivity. Check it out – this really is insane for just a watch app: 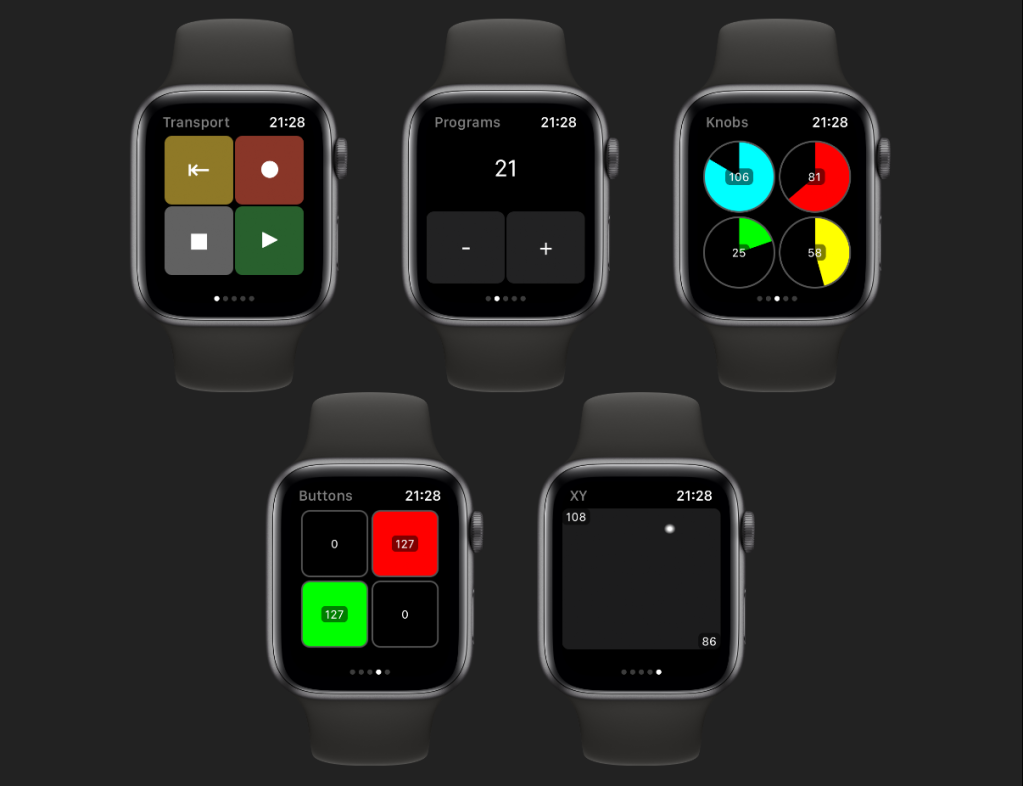 All of this really does make me want a dedicated DIY haptic device. I had an extended conversation with the engineers at Native Instruments about their haptic efforts with TRAKTOR; I personally believe there’s a lot of potential for human-machine interfaces for music with this approach. But that will depend in the long run on more hardware adopting haptic interfaces beyond just the passive haptics of nice-feeling knobs and faders and whatnot.

Fun anecdote — in a way, this app has been more than three years in the making. I got the first Apple Watch in the hope of creating this, but the technology was way too slow without a direct real-time communication protocol between the Watch and the iPhone. I’ve been watching every Watch release (teehee) up until the last one, the Series 4. The customer reception was so good overall that I decided to give this another go, and only after a few hours of prototyping, I could see that this would now work and feel great. I did buy a Watch Series 3 afterwards also to include in my testing during development.

Generate wavetables for free, for Ableton Live 10.1 and other synths

controllersios
R-Kontrol is an advanced iPhone, iPad touch controller for Bitwig Studio
Apple
Yeah, you should totally hold off updating to macOS 13 Ventura if you can, because plug-ins
Apple
Logic Pro 10.7.5: free tempo recording, personalized Spatial Audio, Ableton Link, more
MIDI
BOSS SL-2 is the slicer in a compact pedal with loads of powers, MIDI, and stereo in & out