We talk a lot about survival tips for the music industry, but rarely does that get into the personal. So the moment is right for Discwoman’s Frankie Decaiza Hutchinson to tackle music’s greatest obstacle: ourselves.

Frankie is the co-founder of Discwoman, with Emma Burgess-Olson (aka techno producer UMFANG) and Christine McCharen-Tran, as well as the booker for Bossa Nova Civic Club. Each of those projects has become influential, as Bossa has become a fulcrum for the new Brooklyn scene and a highlight of post-Bloomberg/Giuliani New York, and Discwoman a template for building a collective and booking business around women and non-binary artists.

Frankie is not a DJ or producer (“thank God,” she tells me), but I think it’s then even more relevant that she’s taken on a new role for Crack Magazine – advice columnist. (She’s taken on the role “Agony Aunt.”)

For instance, in the latest installment, she answers a Berlin (huh) writer who worries about comparisons and self-doubt. (Frankie even concedes she can struggle: “It’s completely irrational and I often feel like I’m falling apart but there’s very little space for me to fall apart as there are so many people dependent on my work so it’s a lot of pressure,” she responds.)

This is the thing we often don’t do in the music world – talk honestly about ourselves. The cost of that lack of honesty can be depression – and worse. So just as Discwoman’s motto, is “amplify each other,” emblazoned in enormous letters across their merch and even website, I think it’s high time music makers and the people working with music makers talk about things like – gulp – self sabotage. That can be devastating for people who seek music as a hobby or as a profession.

Frankie was kind enough to take time from her busy schedule at Bossa to answer some questions about that and building Discwoman.

happy 3 year anniversary to the loves of my life @discwomannyc so cliche but really dunno how a real mess like me came to nyc with $100 and now doing this but I guess stranger things have happened. nice to reflect within this mad world ☺️ 📷 @aurorahalal

You spoke to Crack a bit about handling social life and partying – then there’s the matter in this business of handling work and communication. I know these cycles can become really intense. And especially in a city like Berlin or NYC, it seems it can be really easy to get lost. How have you coped with that?

I fail at it all the time. I think that’s important to always say when you give an advice, I’m not just giving advice to the person asking me; I’m also giving advice to myself. I used to drink pretty much every single day; I’d often find myself at bars at closing time and making questionable decisions as a result. For me, everything shifted when I started becoming more interested in my work, i.e., Discwoman, and then there was more responsibility. I only really had one option: to not drink everyday and or go out everyday. It’s literally impossible for me to work if I’m hungover – and, in addition, my anxiety is horrendous. I quit weed recently, and that helped me dramatically. But I have routine relapses every now again, which fuck up my days.

It strikes me you’ve really built an extraordinary business around Discwoman. Has that really been about focusing on this existing roster? Or do you see diversifying important – is it important to have merch, for instance, for awareness or even for revenue?

Merch is important for both awareness and revenue; that’s literally how survive. My favorite part is definitely running our booking agency – I’m just so proud of it, honestly. It’s not perfect, but we built something from scratch that we felt was lacking: an agency that represents women/nonbinary talent. Our big vision is to keep on building the agency and perfect a home for even more talent.

You touch a bit on self doubt. I think from the outside, we’ve gotten to see Discwoman’s rise, its successes. I’m sure we don’t always see some of the challenges. Where we cases where you had to learn or adjust what you were doing?

At the beginning the language we used “female-identified” was not sufficient – and the term “female” is [itself] archaic and problematic. So we adjusted our language to be more inclusive and expansive. Now, we tend to use “women” and “non-binary.” But, again, being open to changing your language is part of the process of being inclusive, so no term is ever set in stone.

We’ve learned as we go. When we started the agency, none of us had any real experience; we just kind of made it up and learned on the job. [We were] taking contract templates and rider templates from the internet. There’s no one to really teach you those things, so we had to teach ourselves. 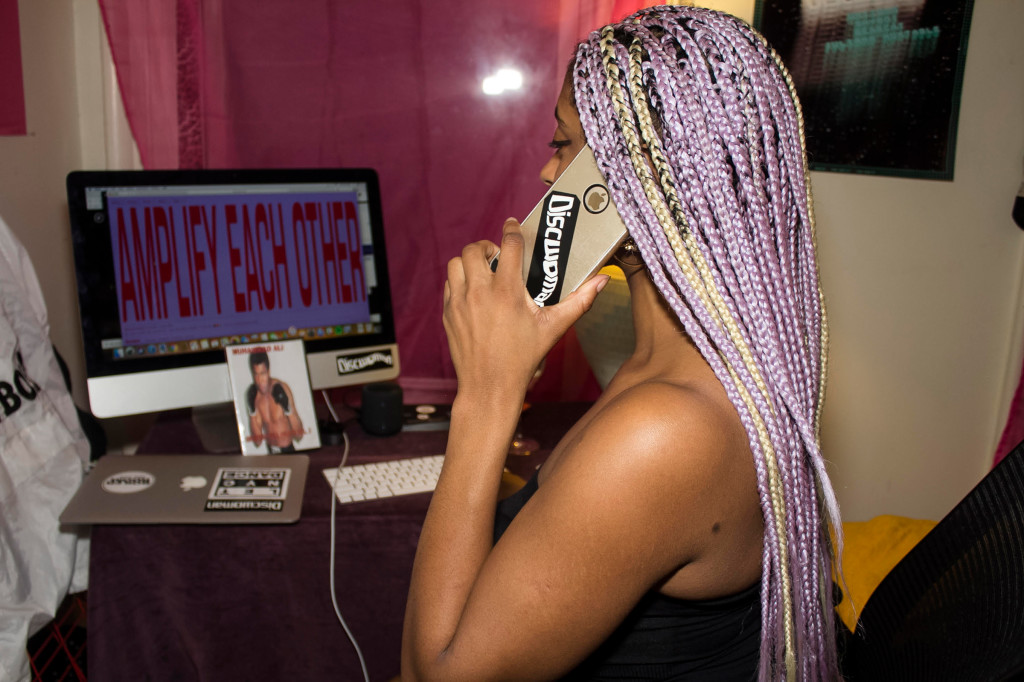 You’re managing a lot of social media for yourself and Discwoman, right? Do you ever find that can feed this sense of comparing yourself to others, or to some idealized sense of what you want to be? How do you manage that – especially since I would imagine in your role, isn’t it hard to unplug from all this media and communication? How do you hang onto yourself in those situations?

Absolutely; I feel jealous or shit about myself all the time, and social media compounds those feelings. But I rarely act on those feelings, and I try my best not to speak hatefully on my accounts, as honestly, it just gives me more anxiety. Like recently, I tweeted that I felt more non-black folks in the scene should have supported the black history event we did at Bossa, and I just felt really shit after tweeting it. Not because it’s not true, but because it mentally makes me spiral and become paranoid which is unnecessary, because the event was a great success. But sometimes I cant keep my mouth shut, ha!

I’m also definitely projecting a narrative into the world. I use my Twitter and Instagram as a storytelling device. For me, that’s fun and creative. I know people are critical of these mediums for being inauthentic, but that’s honestly not something I care about that much. People love to hate famous women on these apps for projecting a false representation of themselves; I personally find this critique extremely boring and short-sighted, which ends up targeting these women as scapegoats for a much bigger problem. Like the way Jameela Jamil’s popularized feminism really bothers me.

[Ed.: For more on that last comment, in case you’re curious about context, here’s one take from The Atlantic – there are others with similar sentiments.]

If you want to check out Frankie’s advice:

Dear Frankie: Tips on self-sabotage and finessing the life-club balance (latest episode, or check out the debut) [Crack Magazine]

Let’s get some music here. Just as a sampling of who Discwoman have on their roster (apologies for my own Berlin bias)…

I’ve gotten to know Munich-born mobilegirl based on her great work for Staycore and unique take on production and DJing, including a dynamic high-powered set she played at the bottom of a well (really) when we were all part of Nusasonic Fesival in Indonesia:

Warsaw-to-Berlin artist VTSS has been doing some great mixes between industrial and acid, so I was already jamming out to this Newtype podcast this week:

Akua can mix techno that’s fast, weird, fast and weird… sold. More, please. Oh yeah, and this mix for Discwoman has a tracklist to go with it, as well as an interview. (Because tracklists are good.)

Actually, you know what, let’s throw in another Akua mix.

For another collective that comes from a background that’s more leftfield (and that’s based in Poland rather than New York, which makes for a different landscape), we’ve also talked to Oramics:

In Poland, a collective for women and queer artists becomes an agency

Inside the esoteric moon music of Doc Sleep, underground connector

How to make a multitrack recording in VCV Rack modular, free

poland
Polyend Tracker 1.5 lets you save custom instruments – and opens up sharing with others
NYC
Bespoke visual noise is the next domain for Robert Henke – so let’s revisit Perlin, anyway
usa
From Detroit and Berlin, a free set of sounds and a blazing compilation
usa
Softpop SP2 is next-level analog synthesis and processing from Bastl and Casper Electronics