Well, congratulations – you’ve survived another April Fools’ holiday. At worst, it can be unfunny and confusing. At best, though, it raises a different question – should we actually start dreaming up and making more ridiculous ideas?

Okay, I don’t necessarily want to be the grinch of April Fools’. And maybe now is not the right time to raise this – like, someone might say that it could have something to do with the fact that I attempted a product launch on the holiday, uh, yesterday. (What? That was me? Oh, yeah – it was. MeeBlip geode is not a joke. We are really making it. And um… yeah, that did wind up hitting some confusion, even though there’s nothing particularly April Fools-y about geode.)

While it’s had some glimmers of clever parody, the collision of April Fools’ with an attention-starved Internet has led to a noisy confusion of a bunch of people deciding to write parody press releases and videos, and the ideas can get repetitive. And it can confuse everyone about real news – not just ours. This year, the date came between two of the bigger synth and electronic music events of the year – sandwiched not more than 24 hours apart from Synthplex in the USA and Musikmesse in Frankfurt, Germany. (Yes, Messe is again a thing; even with Superbooth in Berlin stealing away modular makers, there’s a lot of musical instruments business outside modular, a lot of distributors in Germany, an entire industry around lighting tech, the music education business in Germany, and a competitive Messe organization slashing rates on booths, so expect it to stick around.)

But about the fake products we wish were real products … sigh, again.

Yeah, okay, it’s probably not terribly practical for KORG to make a cassette volca. On the other hand, it’s not just the Rickroll video that’s tonedeaf to 2019 – lots of us have repurposed our cassette decks. I have a Yamaha multitrack sitting next to me in the studio wired up. People are making tape loops with Walkmans. There are tape labels. Bastl Instruments and Teenage Engineering, among others, have made digital decks that reimagine tape loops and tape playback. And having seen weird tape players show up on Amazon, I expect it’s not impossible to make new hardware that includes mechanical tape playback in it.

So the joke’s really on KORG here. Instead of getting pranked or sharing this because it was funny, literally thousands of people jumped on the idea of a KORG volcasette. (Obviously the biggest clue in – using KORG’s volca series nomenclature, it should have been KORG cassette or KORG tape. Just sayin’.)

The proposed features of this thing already exist on multitrack tape recorders, but the mind reels with other possibilities – looping, sampling, strange custom tape echoes… so to be clear, making a new multitrack cassette deck would be fairly silly, but making a compact instrument built around mechanical-magnetic tape ideas, that could get very cool.

And yes, of course there was the Ableton’s ReChorder – maybe the one amusing part of the parody there was, the awful music at the end does kind of remind me of some terrible demos of unusual instruments over the years. This one we can at least leave out of the instances of products people would want.

But even silly April Fools’ products can go viral – perhaps because we live in a world where brands are doing such strange things already, it’s not clear how you could make a joke that was any more absurd.

So, a HYPERX CUP MIX-IN pair of headphones shaped like two Cup Noodles containers and a fork had some of us … wanting instant ramen … and others actually wanting to try to buy the product. (Various blogs even picked this up assuming it was real.) I have a pair of Beats by Dre headphones in white that I suddenly want to mod to actually do this. 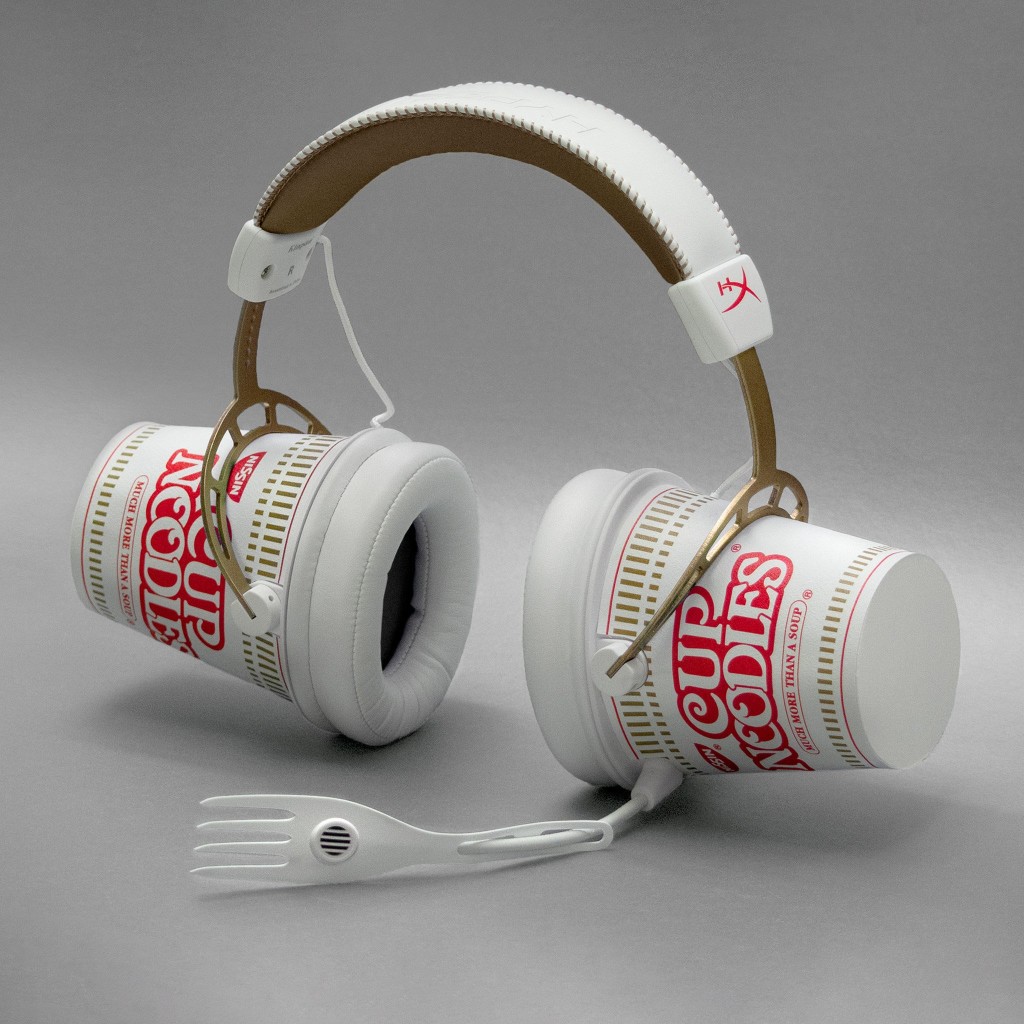 Useful? No. Possible to DIY? Yes. Tempting? Oh, indeed. (I’m sure some sort of ramen container housing could work.)

Then there was this USB-C hub covered in legacy ports. Except… yeah, I definitely would buy something like that. (SCSI for old drives? Actual analog video? Tons of extra ports, or card readers?)

Sure, this is … not totally possible. But parts of it are and … you know you want it. Their ridiculous specs, though take any subset of these and you might be happy. 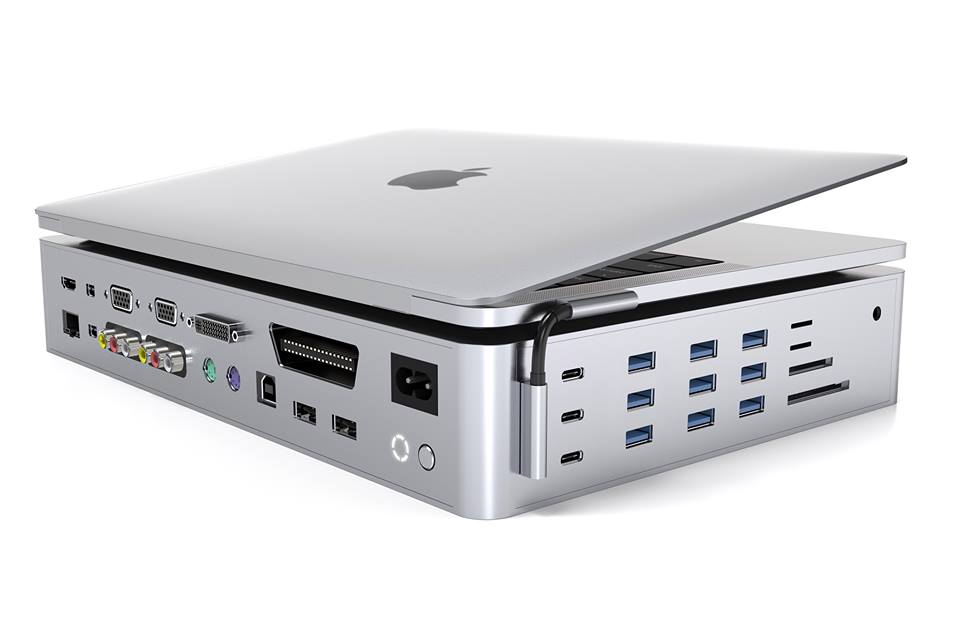 Hyper Releases The Mother Of All USB-C Hubs

Hey, there is a lot of bandwidth on Thunderbolt 3. I think this particular device might catch fire. But it is possible to have more ports.

Part of the reason this isn’t a joke: a friend urgently needed to pull files off a SCSI drive. I wound up looking back at Apple machines from just around the turn of the century, which in fact had every port you could imagine. The bronze keyboard PowerBook G3 Series, for instance, includes both USB and SCSI – and since it runs used for $200, you can actually buy that entire laptop to transfer data from legacy drives more easily than you can buy a modern SCSI adapter. (The adapters appear to be both more expensive and more scarce than the entire computers.)

Or for a more extreme example, consider the PowerMac G3 Series. This machine was everything Steve Jobs stamped out at Apple – boxy, with a beige slightly curved-out ID design language that mostly evolved under CEO John Sculley. But it sure had ports. Photo (CC-BY-SA) 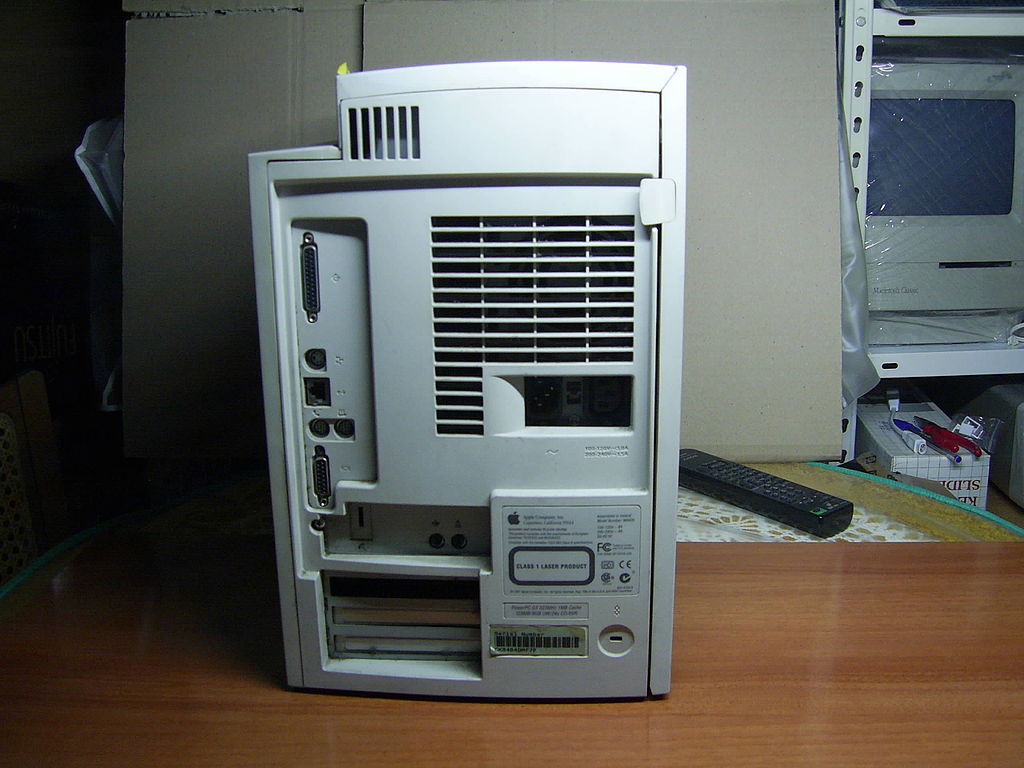 Maybe you’ll rescue the legacy devices, but I do miss analog video – badly. And the notion of professional machines where you might actually connect various hardware, that bit still seems relevant. I love compact and friendly devices, but I also love choice.

And of course the only real joke is trying to figure out how to buy a USB-C device or cable … ahem … (to say nothing of those Apple cable prices).

Maybe the bottom line here, though, is that one person’s joke is another person’s dream. Some of the best, most creative ideas start as jokes. April Fools’ as far as I’m concerned in tech just needs to go away – it’s a day that adds noise and confusion to media that don’t need more of that, ever. But here’s another approach: maybe we should be willing to dream up absurd ideas the other 364 days of the year.

See any April Fools’ jokes you wish were real – and anybody up for actually making it happen?

Time to pick up a Walkman at the next flea market and start hacking; that’s for sure.

[Side note – unless you think I’m alone in this, The Verge has been pointing out April Fools’ as the (literally) Medieval time waster that needs to die. And Microsoft also banned April Fools’, which might itself seem like a punchline, except that … no, we really want you to be focused on your damned software, actually, so agreed. Plus Apple Computer was founded on April Fools’ Day, 1976 – and never once did an April Fools’ Day joke (though had plenty of pranks, as they should be done, on other days, and internally).]

I’ll compile any good ideas from 2019 (or other years, if you remember) here. This one is better than any of the three I suggested. This parody doesn’t come from Native Instruments, so it’s possible this is even in the works but – the haptic TRAKTOR controller as a single deck makes loads and loads of sense. (Make it work standalone without a computer, please, if we’re dreaming…)

MeeBlip geode synth is all about getting your hands on sound