Remember ACID? It’s back – and ready to split stems for you automatically

Back in 1998 when it came out, ACID – aka Acid pH1 – was ground-breaking. Drag and drop loops, make a song: more than any other single software release, this was what would change computer music making. Sure, Propellerhead had already established a few years earlier that you could use warp-able digital loops to remix music, make new music, and work with samples in new ways. But it was really ACID that established what an entire production tool would look like built around the concept. Loop-based music production on the computer was now a thing.

ACID’s place as a leader, however, faded. Original developer Sonic Foundry sold to Sony. Ableton ran with the loop workflow and built a tool with real-time performance. Apple built GarageBand and Apple Loops with strong influence from ACID – but on the Mac (and later iPad), whereas ACID was Windows-only.

ACID Pro has continued to see updates, and some users have certainly stayed loyal. But the pace of progress languished at Sony, and the tool was sold to Berlin developer Magix.

Well, it’s back – and with an idea that could put it on the map again.

ACID Pro Next makes “audio separation” its banner feature. It wasn’t developed in-house at Magix, but with fellow German developer Zynaptiq. That could mean you see other DAW makers license this, but it’s a natural for ACID’s workflow – and ACID has gotten there first.

And here’s the thing: the sonic results, in the demos, at least, sound really good – a new level. We’ve been wowed by Zynaptiq’s DSP prowess in the past, so I’m not surprised. I’ll want to check this on my own material with more time, but it’s promising.

This, of course, solves two major use cases:

“Hey, will you do a remix?” “Sure! Can you send me the stems?” “What are stems? Here’s a stereo file.” “No, like separate tracks.” “Cool, here is a random selection of audio files that don’t seem to add up to the whole track for some reason.” “No. How does that help? I… augh.”

And the second use case:

“Oh, this track. I forgot I made this. Wait… I could do something with this. I just want to change the… where’s the original project? Wait, what do you mean Logic Pro corrupted the whole project and undo no longer works. Let me check the backup … backup… oh. #$(*&$@.”

I’m guessing that machine learning is involved in this implementation, as I know this developer has been working in that field. The results aren’t perfect, either – this kind of separation is difficult, so you will hear residual artifacts. But it might still work in a remix context.

No embeddable video/audio yet, but check out the demos on their site.

We’ve seen this once before in Accusonus’ software, but as a plug-in, which means extra steps when it comes to separation. This is the first time it’s been directly integrated in a DAW. I do hope we get to do side-by-side audio comparisons of Accusonus’ and Zynaptiq’s approaches – especially as the ACID Pro Next results sound so good, far better that what Accusonus gave us a couple of years ago. (That makes some sense; machine learning audio processing has evolved since then.)

Here’s a look at how the remix process works with Accusonus – and it is possibly to use this creatively or even abuse the results:

Try AI remixing in Regroover with these tips and exclusive sounds

And here’s our conversation with the developers about what happened behind the scenes from an engineering perspective:

A simple but cool idea also in this release is the MIDI Playable Chopper. It takes audio files and splits them into slices – okay, basically everything does that. And then it lets you play those slices with an external MIDI controller, without any further configuration. No extra steps putting those slices into some kind of drum device, just play as you slice. Why doesn’t software work this way? I have no idea.

Play as you chop.

But those two features already could make ACID Pro the remix machine to beat. It’s good enough that I could imagine, while a lot of us don’t like to switch DAWs, some of us might consider giving this a go just to get through a tight remix deadline. 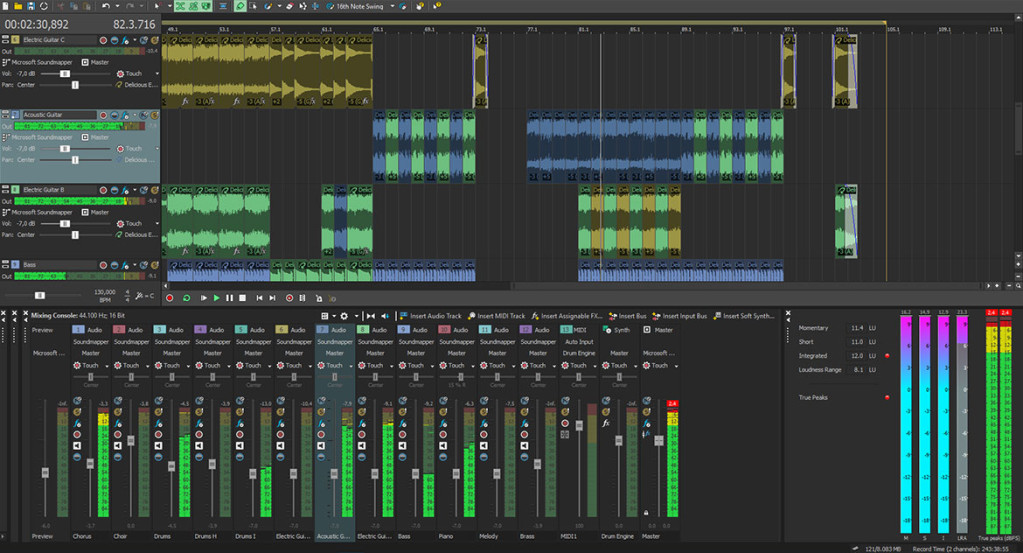 There’s more, too. There’s a new VST engine – adding VST3 compatibility, but retaining a 32-bit VST bridge even as most DAWs drop that. There are mastering-style metering tools so you can get your loudness right as you mix without third-party tools – nice. And you get a refreshed library of instruments and effects. So there are new virtual analog and lead synths, extra effects, and mastering tools.

For some reason, they’re also including … a concert guitar and a saxaphone plug-in? Not sure where that fits in, but fine.

Pricing starts at US$149, with Next – the one with the cool stem features – starting at US$399 ($299 upgrade). And there’s a subscription. And it’s kind of complicated, unfortunately.

Ableton release free CV Tools for integrating with analog gear, made in Max