Apple promised something special – and modular – at the pro desktop level, and they’re delivering something ambitious. Welcome the return of big metal desktops with tons of PCI slots and maxed-out power supplies. And if you missed Macs that look like cheese graters, you also get your wish.

In a nice touch, they’ve also added wheels so you can roll this thing around a studio. And studio is what they have in mind. Following an hour of consumer-focused iPad and iPhone stuff and things on your watch, the pitch for the new Mac Pro is about video editing, music and audio production, 3D, and gaming.

Just be prepared for some massive sticker shock – there’s not really an entry level model here, so much as a luxury PC that starts pricey and gets more expensive as you configure the very features Apple is using as a selling point.

Most of this stuff is on the visual side, even despite the mention of lots of “virtual instruments” in the keynote (cue cheesy “Kenya” music), partly because audio users don’t need this amount of power for most of what they do. But visual people, this again looks exciting – at last.

Music folks, there’s also a new release of Logic Pro, which I’ll write about separately. It seems to be the Hans Zimmer school of benchmarking, with 1000 virtual instruments. For the first time in a long time, Apple shows Logic and Final Cut together.

The system appears to max out everything: 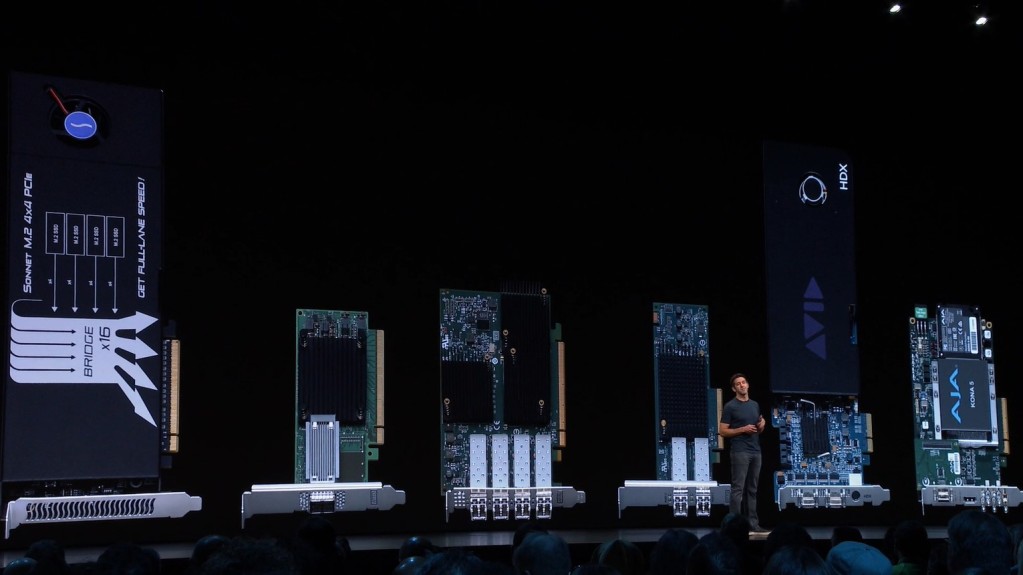 PCI slots are back. 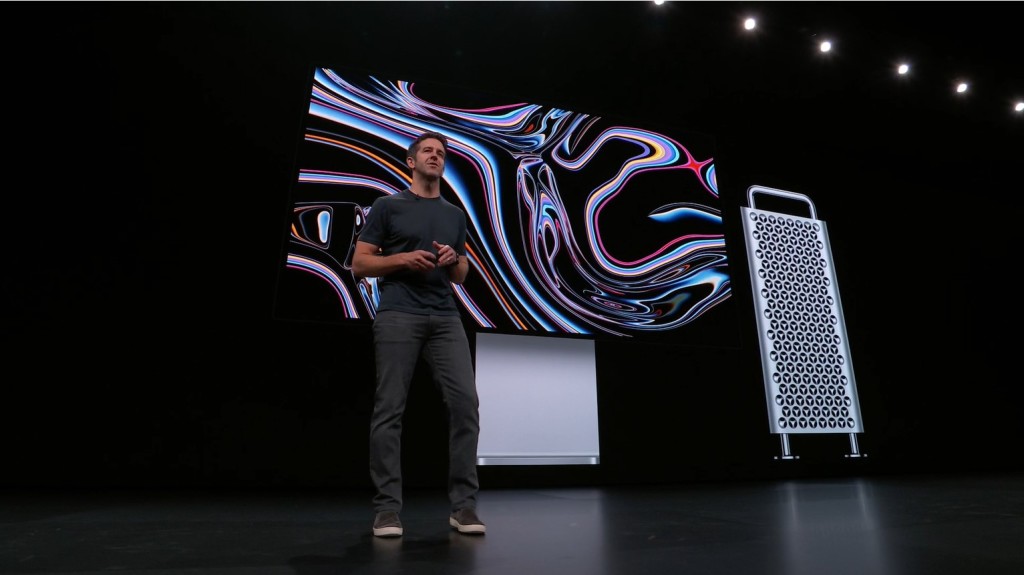 CPU. Now top-of-range Intel Xeon – with up to 28 cores.
GPU. A huge power supply and new connections, plus “Thunderbolt throughout” mean support for one or two top-of-the-line AMD Radeon Pro Vega II GPUs. (Apple continues their preference for AMD; there was no mention of rival NVIDIA.) It’s all part of a new connection module Apple calls MPX.
Afterburner for video. This is actually an FPGA that assists in handling video codec processing, for faster proxies and whatnot or direct RAW editing.
PCI expansion. This is finally back – tons of it. So you can add (mostly graphics) add-in cards. It’ll be interesting to see if the audio market goes back to working with PCI, after largely moving to interconnects like USB and Thunderbolt, which allow them to target laptop and desktop owners at the same time. But for graphics, it’s huge.
Lots of electricity. Don’t expect to save on your electricity bill or save the planet with this one. A massive 1.4 kW power supply runs the whole thing.
Quiet cooling. The GPU interestingly uses a massive heat sink, but there are tons of fans to move air through the device. Some of us remember when this went awry with the “jet engine” Macs of the past, but Apple promises this new model will be as quiet as the iMac Pro even under load. 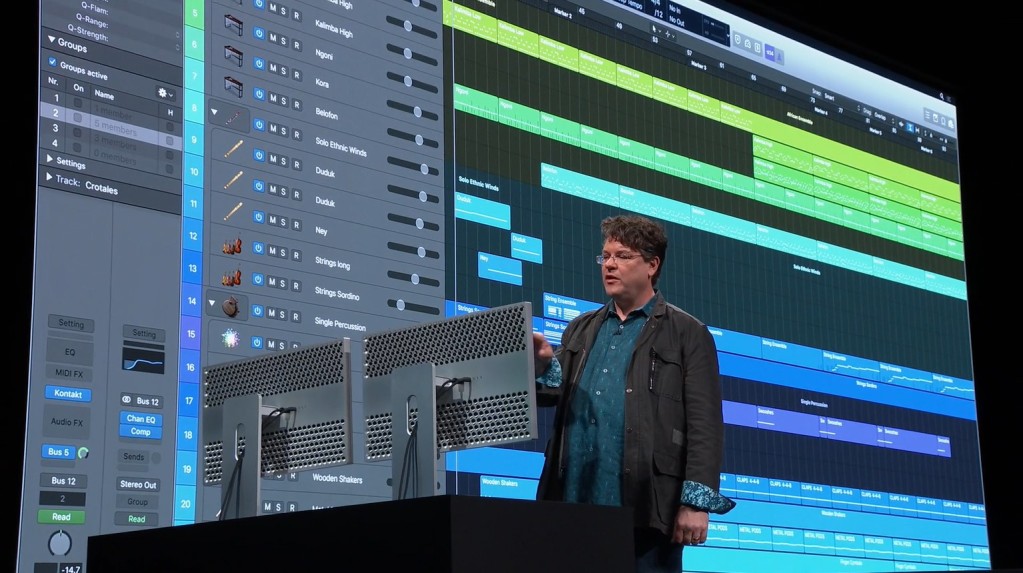 Apple shows 1000 tracks in Logic at once. 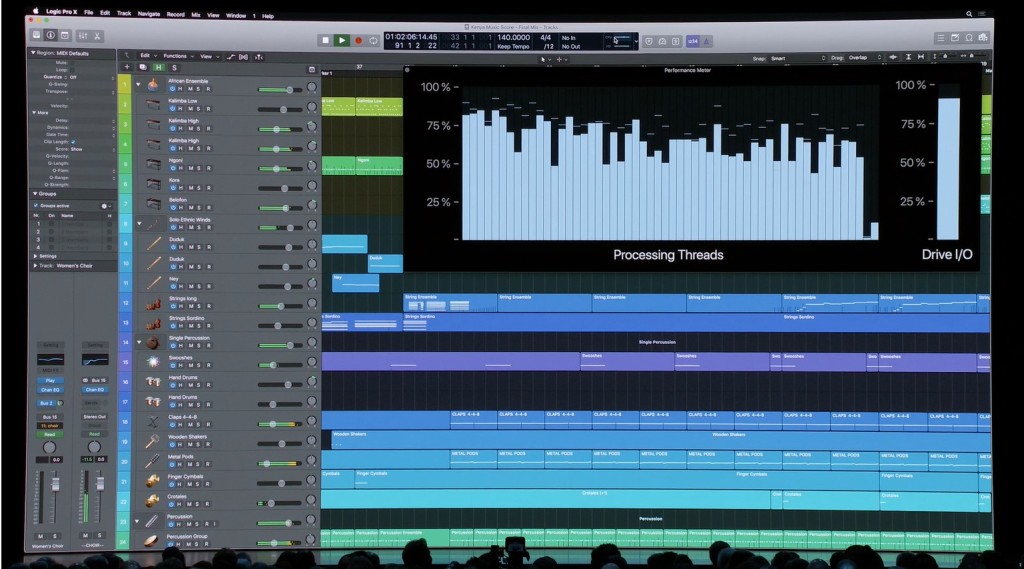 Logic’s threading makes use of all that insane number of cores.

And there’s a new display, of course – a Pixel Display for your desktop. Apple’s displays have tended to command a price premium, so that a lot of pros opt for other brands, but here they seem to be leaning in to that with an ultra-high-end option. There’s a massive contrast ratio, color range (“extreme”), and high density. It’s called the Pixel Display XDR. It all connects with Thunderbolt 3, and there’s a new stand design.

That means you can use this with your MacBook Pro, too. They would like you to buy six of them for your desktop. (“Whoo!” she shouts, Ballmer style. I’m sure they would like to sell that many.) 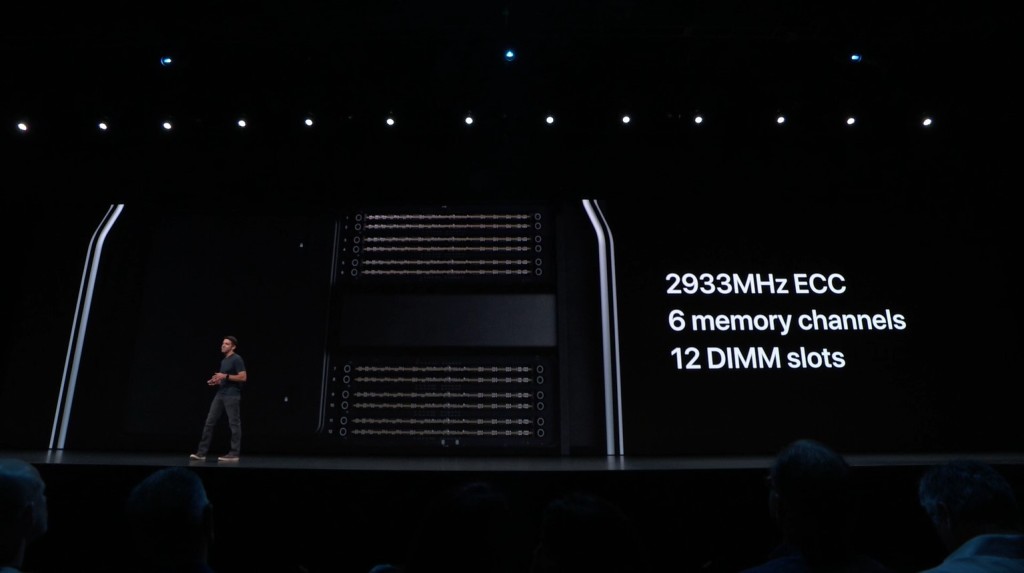 High-spec memory is part of the story here. And lots of of it, if you want. 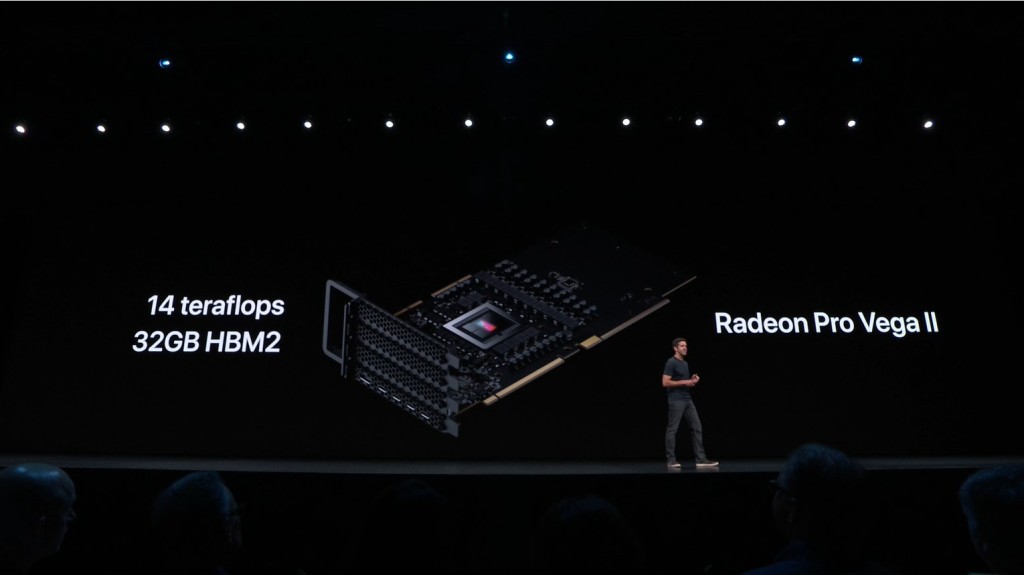 Apple goes to a high-end GPU again – and has another modular format for updating it (MPX). 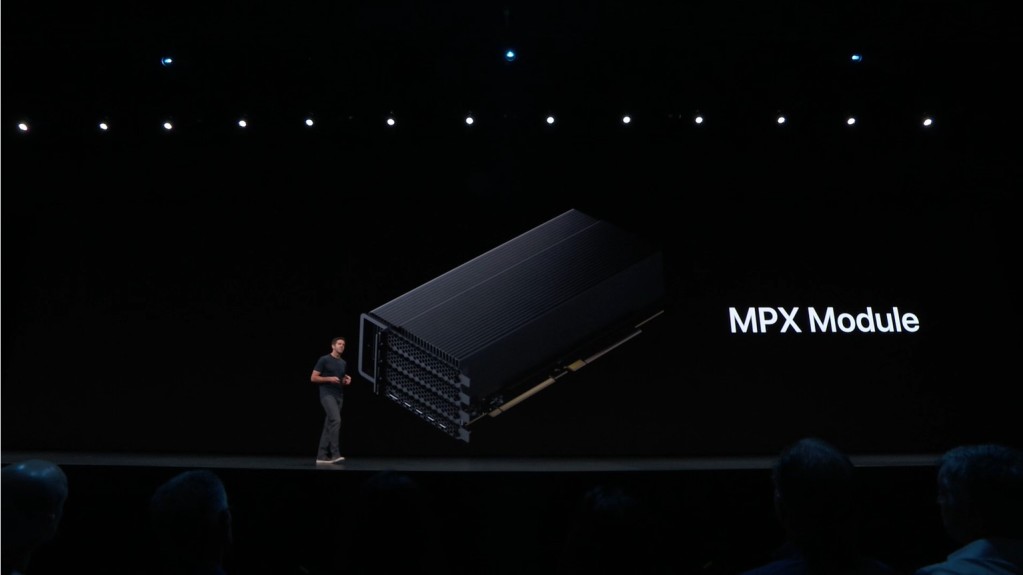 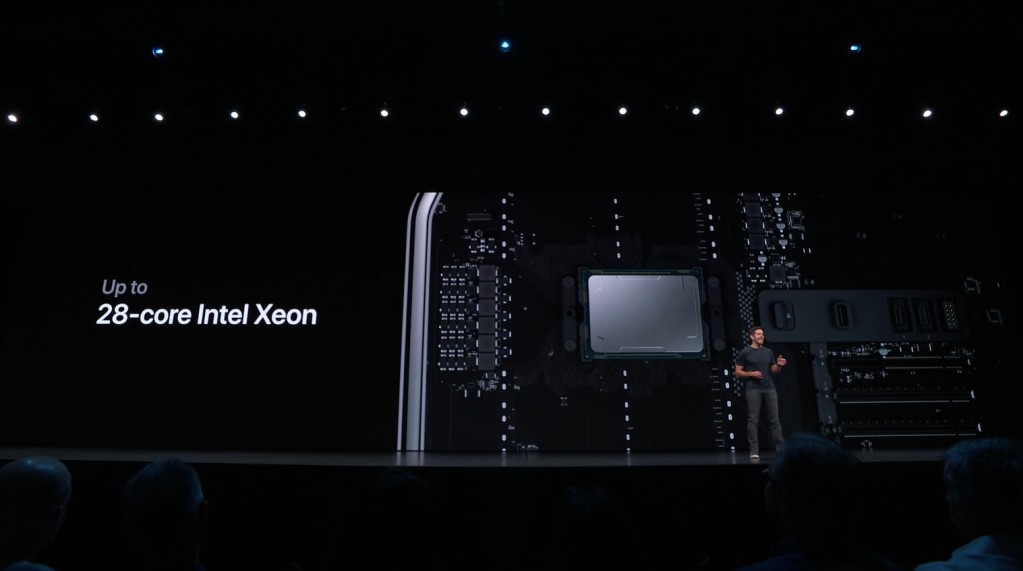 The CPU is a star here – loaded up with cores. 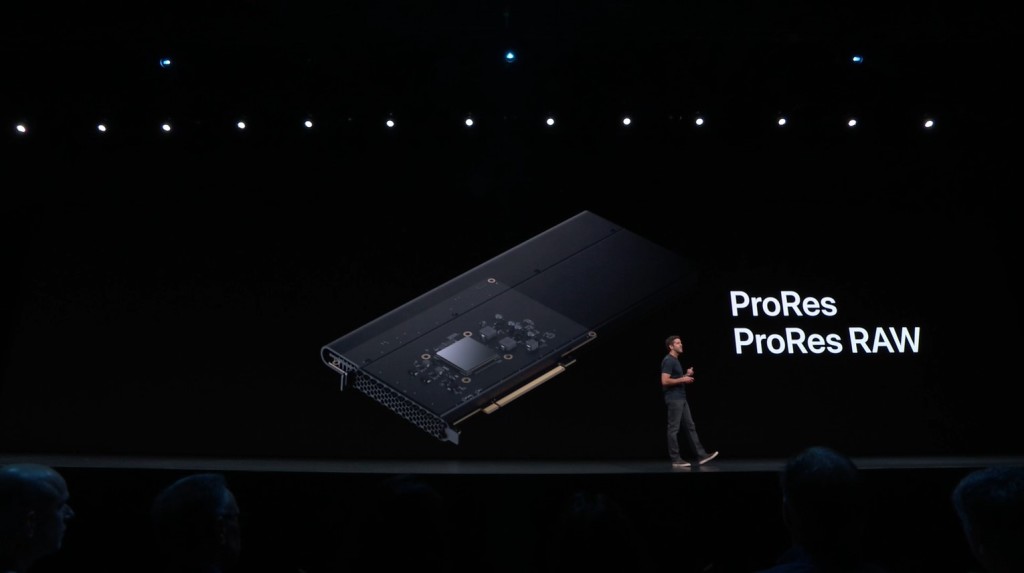 Afterburner is an FPGA-based add-on for assisting video editors with handling high-res footage. 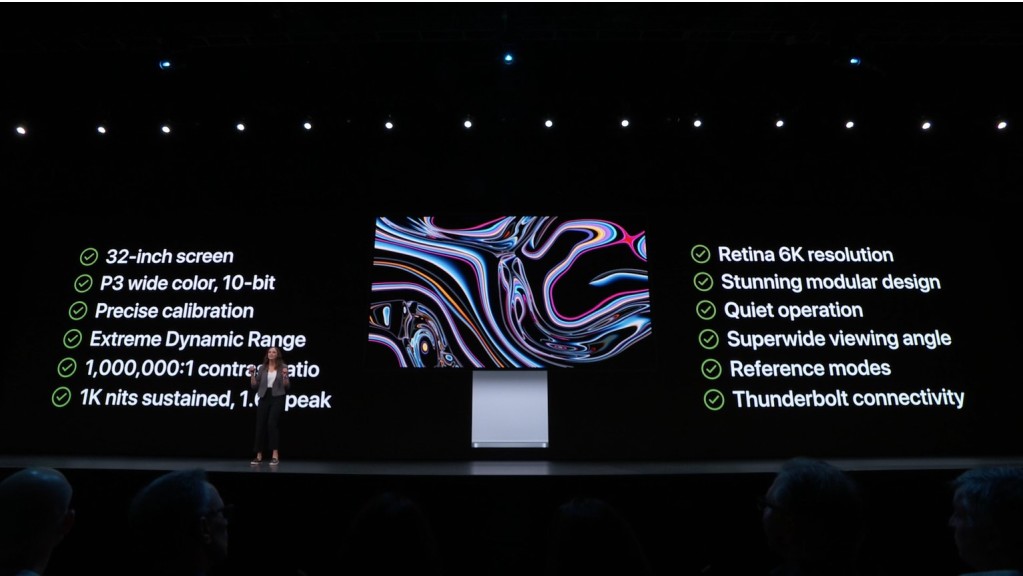 There’s a display to go with this, too. 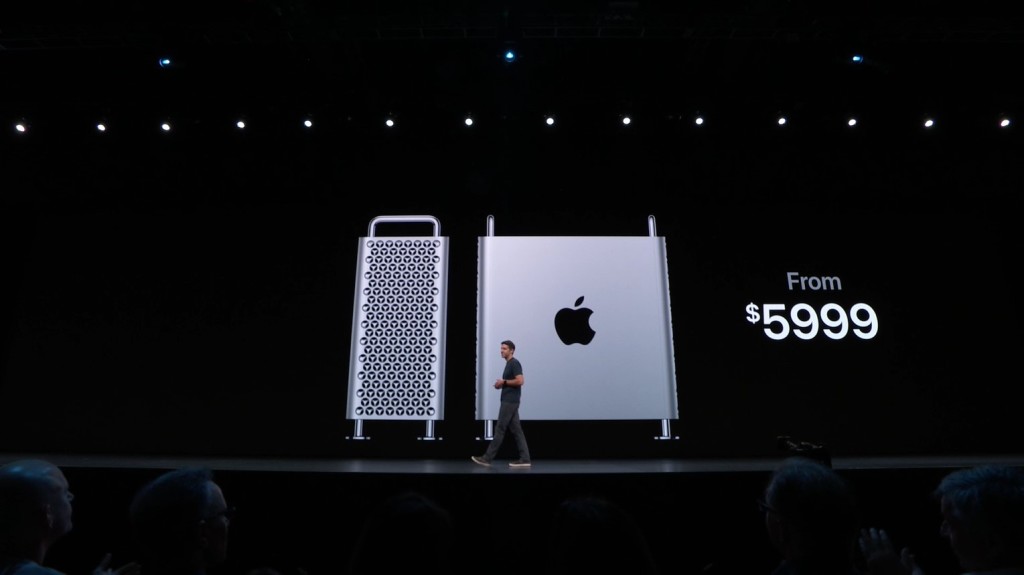 Just get ready for some sticker shock.

There’s tons of innovation here, but that also means early adopters will be taking some risks. More ambitions tend to mean more potential points of failure. But it’s exciting to see Apple do this kind of innovation on the Mac again – and with the actual needs of pros in mind. I look forward to seeing how this pans out.

High end Mac will cost you – US$5999, though Apple compares to high-end machines at the 8 grand level. Coming in the fall.

The key here is that US$5999 buys you the minimum specifications – so this is a pretty tough hit. That model inexplicably has just a 256 GB hard disk.

It also has an 8-core processor, not 28, though it’s a hefty 3.5G Xeon W. You get 32GB of RAM. And if I read it right you get a single Radeon Pro 580X GPU. (Maybe. It could be that the $5999 price won’t even include that.) You will have lots of expansion – eight PCI Express expansion slots total, though you may replace those with two MPX modules. Three full-length gen 3 slots round out the picture. (The eighth slot is taken up by their I/O card.)

The big question is whether Apple’s newest machines are plagued by the kinds of problems that have hit their recent models. Hopefully they’ve taken a different approach with this pro machine, and because we’ve been yelling at them pretty loudly about issues like audio reliability.

I/O is on a new Apple I/O card on the final half-length x4 PCI Express gen 3 slot. I’m guessing that means this machine won’t have the USB controller on the same board as the T2 chip, which is what has been evidently wreaking havoc on 2018 and later Mac models. There’s a mention of the T2 exactly once – regarding storage encryption. I could be wrong about that, but at the very least the presence of this new I/O board suggests some new (hopefully better) engineering.

I think I’ll probably think about getting one when… the next generation arrives and these prices drop. But the logic here makes sense: the pro market for studios has become more rarified. If Apple can make a case that these are machines that will last a longer time, I could imagine these machines becoming very popular in those core segments. Musicians, even serious pros, will probably still largely stick with capable laptops, but for video and high-end visuals, the need is real. And the pay is better for those markets, generally. (Ahem.)

Salient response from Twitter, and typical of what I’m hearing:

Too expensive. Why start the base model at 256 GB and with now old Thunderbolt 3. Also, new PCI express is coming so life cycle is not superlong.

However, Thunderbolt 3 isn’t necessarily outdated – coming specs provide more bandwidth than even these high end video applications (and six displays) need, so the Mac Pro is a kind of showcase for how far Thunderbolt 3 can go. The issue is still to me really configuration. By making a no-compromise system here, Apple has spec’ed their machine way out of the price range of even a lot of the pro market. And yeah, that 256 GB drive is sort of a slap in the face.