VCV Rack hits 1.0; why you need this free modular now

VCV and developer Andrew Belt have hit on a new formula. Rack is free and open source on Mac, Windows, and Linux, and it’s free for developers to make their own modules. It also has tons of functionality out of the box – both from VCV and third-party developers. But then to support ongoing development, those developers offer some superb paid modules. Once you’re hooked, spending a little extra seems a good investment – because, well, it is. 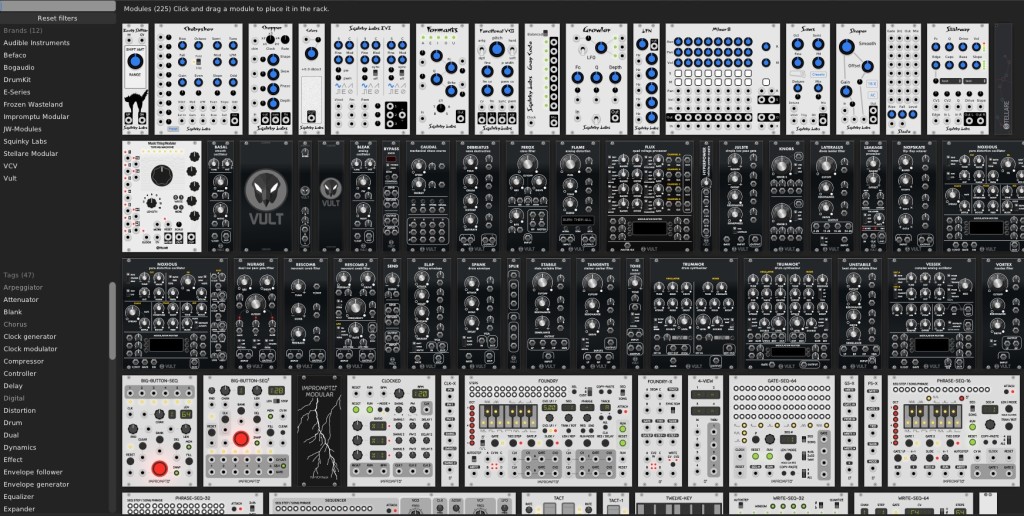 All those modules… now seen in the new 1.0 visual browser.

Crucially, it’s a good deal for developers as well as users. Independent software developers, VCV included, are able to communicate directly with users, who in turn feel good about supporting the platform and community by spending some money. And hardware makers have a new way of reaching new audiences, as well as offering up try-before-you-buy versions of some of their modules. (Open source hardware makers like Mutable Instruments and Music thing were early adopters, but I hear some other names are coming.)

Maybe you’ve heard all this. But maybe you weren’t quite ready to take the plunge. With version 1.0, the case is getting pretty strong for adding Rack to your arsenal. Rack was appealing early on to tinkerers who enjoyed messing around with software. But 1.0 is starting to look like something you’d rely on in your music.

And that starts with polyphony, as shown by the developer of the VULT modules, which include many of my own personal favorites:

1.0 is really about two things – new functionality for more flexible use in your music, and a stable API for developers underneath that makes you feel like you’re using modules and not just testing them.

Polyphony, now a thing – and nicely implemented, both in UI and performance under the hood.

Multi-core accelerated engine. Adding polyphony, even on newer machines, means a greater tax on your CPU. There are a number of under-the-hood improvements to enable that in Rack, including multi-core support, threading, and hardware acceleration. This is also partly built into the platform, so third-party modules supporting Rack will get a performance boost “for free,” without developers having to worry about it or reinvent the wheel.

Adjustable performance: From the menu you can now adjust CPU performance based on whether you want lower CPU usage or more modules. 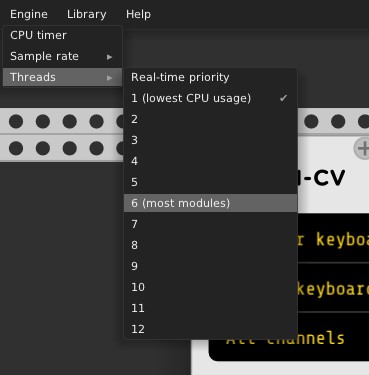 Adjust priority of the CPU based on your needs (more modules with higher CPU usage, or fewer modules but lower CPU).

MIDI out. You could always get MIDI into Rack, but now you can get it out, too – so you can use sequencers and modulation and so on to control other equipment or via inter-app MIDI routing, other software. There are three new modules – CV-GATE, CV-MIDI, and CV-CC. (VCV describes those as being suitable for drum machines, synths, and Eurorack and talks about hardware, but you could find a lot of different applications for this.)

Assign MIDI control easily. Previously, controlling Rack has been a bit of a chore: start with a MIDI input, figure out how to route it into some kind of modulation, assign the modulation. Many software racks work this way, but it feels a bit draconian to users of other software. Now, via the MIDI-MAP module, you can click a parameter onscreen and just move a knob or fader or what have you on your controller – you know, like you can do in other tools.

That will be essential for actually playing your patches. I can’t wait to use this with Sensel Morph and the Buchla Thunder overlay but… yeah, that’s another story. Watch for that in the coming days. 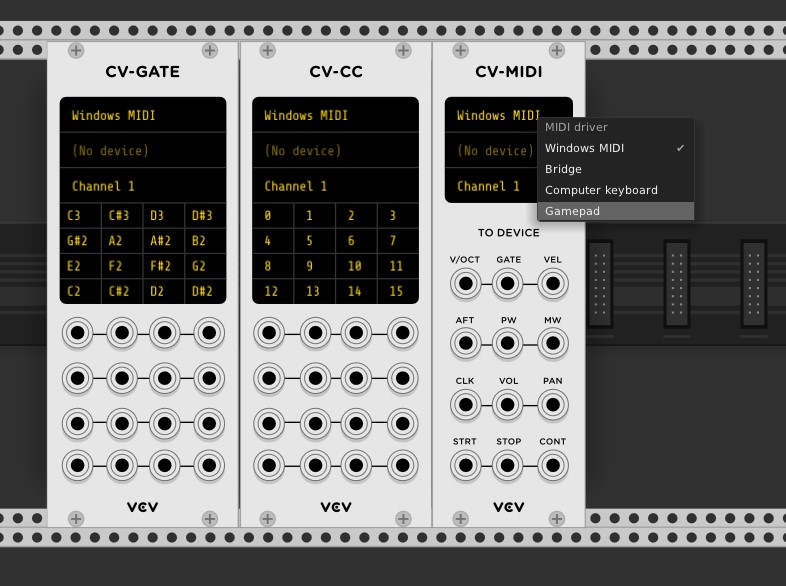 Meet the new MIDI modules, which now support output, mapping, and even MPE.

Numeric pad input as well as revised gamepad support. Now in addition to gamepads (which offer some new improvements), you can hook up numeric keyboards:

Coming in Rack 1.0: A "Numpad" MIDI driver for generating triggers/gates for MIDI-Gate's 4×4 grid using the number pad of your keyboard. pic.twitter.com/7bPUmGG2FF

Enter parameters manually. You can also now right-click a parameter and type in the value you want.

Browse modules visually. All the previous options for navigating your collection of virtual modules textually are still there – type module names, use tags, search by manufacturer or type. But now you also get a pretty visual browser so you can spot the module you want at a glance, and click and drag to drop modules into place. VCV isn’t the first computer modular to offer this – Softube has an awfully pretty browser, for one – but I find the Rack 1.0 browser to be really quick and easy. And it’s especially needed here as you quickly accumulate loads of modules from the Web.

Get new modules by sorting by build. This feature is actually on the VCV website, but it’s so important to how we work in Rack that it’s worth a mention here. Now you can search by build date and find the latest stuff.

Sort by build now on the plugins interface on the Web.

Move and manage modules more easily. You can now disable modules, force-drag them into place, and use a new, more flexible rack. The rack is also now infinite in all four dimensions, which is a bit confusing at first, but in keeping with the open-ended computer software ethos of software modular. (Take that, you Eurorack people who live in … like … normal physical space!)

You can also right-click modules to get quick links to plugin websites, documentation, and even source code. And you can see changelogs before you update, instead of just updating and finding out later.

Parameter tooltips. No need to guess what that knob or switch is meant to do.

You can check out the new features in detail on the changelog (plus stuff added since 1.0, in case you live in the future and me in the past!):

Or for even more explanation, Nik Jewell describes what all those changes are about:

An unofficial guide to the Rack v1 Changelog

Rack 1.0 will break compatibility with some modules, while you wait on those developers to update to the new API (hopefully). Andrew tells us we can run the old (0.6.x) and new Rack versions side by side:

To install two versions that don’t clash, simply install Rack v1 to a different folder such as “Program Files/VCV/Rack-v1” on Windows or “/Applications/Rack-v1” on Mac. They will each use their own set of plugins, settings, etc.

You can duplicate your Rack folder, and run the two versions side by side. Then you’re free to try the new features while still opening up your old work. (I found most of my previous patches, even after updating my modules, wound up missing modules. Rack will make the incompatible modules disappear, leaving the compatible ones in place.)

Right from the moment you start up VCV Rack 1.0, you’ll find some things are more approachable, with a new example patch and updated Scope. And for existing users, be prepared that the toolbar is gone, now replaced with menu options.

Here are some useful shortcuts for getting around the new release:

Now you can right-click a plug-in for an updated contextual menu with presets, and links to the developer’s site for documentation and more.

Right-click a parameter: type to enter a specific value. 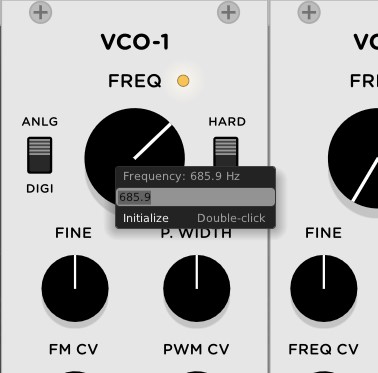 Ctrl-click a connected input, and drag: clones the cable connected there to another port. (This way you can quickly route one output to multiple inputs, without having to mouse back to the output.)

Ctrl-E: Disables a module. (You can also choose the context menu.)

Ctrl- / Ctrl+ to zoom, or hold down control and use a scroll wheel.

Ctrl-drag modules. This is actually my favorite new feature, weirdly. If you control drag a module, it shoves other modules along with it into any empty space. It’s easier to see that in an animation than it is to describe it, so I’ll let Andrew show us:

Coming in Rack 1.0: Hold Ctrl (Cmd on Mac) to "force move" modules, which shoves other modules out of the way. Also use Ctrl-scroll to zoom in/out quickly. pic.twitter.com/TTomNlu8BX

Do check out the Recorder, too:

And developers, do go check out the migration guide.