That’s the deceptively-simple quandary posed by producer Robin Hunicke of thatgamecompany on the eve of the release of their new PS3 title, Journey. But it’s a serious question, one that lies at the heart of all we do in creating digital music and motion. I often have conversations with other makers about whether the ephemeral aesthetic objects of our creative output are meaningful. To put it more bluntly: are we actually doing something productive with our lives? (Oh, admit it. The question must have occurred to you now and then.) But this idea of transforming how someone feels is both wildly ambitious and absolutely essential. Like love, it’s personal, universal, even commonplace, and yet endlessly baffling.

You make a game to make someone feel something. See, that was easy. Now… how, exactly?

Big-budget gaming had become so rooted in repeatable forms that it might have forgotten to keep asking the question, had not a passionate generation of independent game designers plunged straight into it. As such, it’s often game designers these days who, more than musicians or other interactive artists, may prove most articulate and most adventurous in talking about their goals. Maybe it’s those hours of grinding and leveling up … at the chore of game development, that is.

The team behind Journey talks about the game’s aspirations.

Those game designers at thatgamecompany were, initially, acclaimed experimental designers Jenova Chen and Kellee Santiago; Shanghai-born Chen working at USC on the games Cloud and Flow, and Santiago entering USC’s interactive program with a background in NYU theater. Their games’ emotional appeal is expressed partly through motion itself: Cloud, then Flow, then Flower each had at their heart not just a game mechanic, but a way of moving. Free-flowing flight through the air is a signature element; even in this more grounded recent effort, the sense of freedom of movement is built into the games’ personality. I saw Chen and Santiago at a Game Developer Conference talking about Flower, and they talked about how the sense of motion was something they painstakingly prototyped in the programming language Processing.

Now published by Sony, thatgamecompany’s titles are taking on greater polish and are built by a bigger team. That promises to give them more depth, as they work to retain the small-team character in development.

Their aesthetic elegance should give them resonance in interactive and design communities who otherwise might look away from games, often fueled as they are by teenage testosterone fantasy and pumped-up comic-book imaginations. (Not that there’s anything wrong with that.)

Then again, listening to Jenova Chen describe his designs as works of digital zen, it’s what these titles are, more than what they’re not, that draws you in – or might have you eyeing sale PS3 prices. Flower was “interactive poetry,” emotional-philosophical etude told in joystick-controlled choreography. Journey promises to do nothing less than explore the inter-connections of human beings. 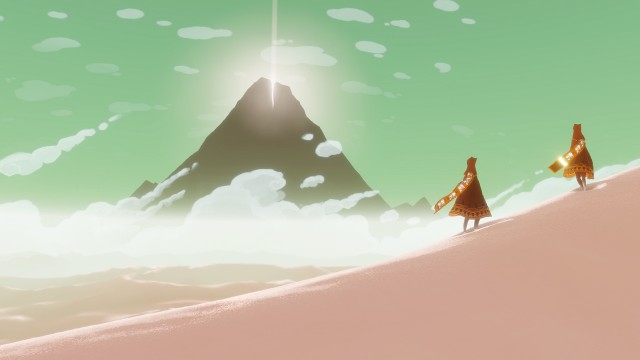 Against those beautiful, barren electronic sandscapes, then, the aim is to encounter other players in new ways. Multiple players can interact without words, choosing to cooperate with strangers to reach a goal. That makes these interactive, massively-multiplayer dunes into a strange and wonderful metaphor for our interconnected globe, one in which visual communication may be the only way to surmount barriers of language, culture, and acquaintance.

But whether or not that program is evident in gameplay, the visual and musical world is arresting and beautiful. It’s yet another reminder that technological horsepower alone doesn’t make games work; this could be one of those titles that seems just as visually-wonderful many years from now as today.

Feeling is built into the look, into those dunes and the flowing robes of a character.

Journey is out today:
http://thatgamecompany.com/games/journey/

Now, if I can just escape “Don’t Stop Believin'” and that horrible Atari 2600 game about the rock band every time I think of the name, I’ll feel so much better. Someone hand me a PS3 controller and a nice flat panel and I’m sure I’ll be cured.

Here’s the reaction to the game, in case that dev team feels like taking their victory lap:

And for a glimpse at what could be the Next Big Thing, the excellent Rock Paper Shotgun examines this year’s Experimental Gaming Workshop at the Game Developer Conference:
GDC 2012 Experimental Gameplay Workshop

From Your Body to Music: Interview with Biophysical Xth Sense Interface Creator