pingtime from videogram on Vimeo.

The table tennis in Pingtime vibrates and warps with sound and projection in an “augmented” experience of the game. The project is immortalized by Bucharest’s Videogram – but we see lots of familiar folks and tools in the credits:

Ironically, I’m table tennis-challenged media, but I get the point.

Suffice to say, this isn’t the only time this has been attempted – though I think the execution here looks terrific. Indeed, something about table tennis has attracted a lot of interest. (Nerds like ping pong, maybe?) Here are a few examples – including a late-90s MIT project that probably deserves to be credited as the origin point for all of these:

Interactive PingPong from InteractiveLab on Vimeo.

DDB Stockholm had a nice execution that demonstrated a mobile browser could be used for control, using an interactive billboard as the playspace. I’m not a fan of McDonald’s (ahem), but I can see this idea being used in other ways to repurpose public display advertising. As seen on Adverblog.

Air Ping Pong by Tobias Snäll and Thomas Jean Tessier — born in Sweden and France, now working in Sweden, North America, and Australia — uses the phones as virtual paddles. Sound and vibration are the only feedback.

Air Ping Pong by Thompson Punke from Tobias and Thom on Vimeo.

For another take on the core interaction of tennis, there’s Hakan Libdo’s brilliant Invisiball, which by using sonic feedback only can even be played by the blind (or, via blindfolds, seeing people having the experience for the first time):

What’s notable about the project at top, and the example of Russia, is how stunningly similar they are to a 1998 project out of MIT’s Tangible Media Group:

A common criticism of this site is that it hasn’t made note of history. Here, we are certainly obligated to do so, as the 2013 project isn’t really noticeably different from the 1998 project.

PingPongPlus is the work of a team led by Professor Hiroshi Ishii, with Craig Wisneski, Julian Orbanes, Ben Chun, and Joe Paradiso.

PingPongPlus is a digitally enhanced version of the classic ping-pong game. It is played with ordinary, un-tethered paddles and balls, and features a “reactive table” that incorporates sensing, sound, and projection technologies. Projectors display patterns of light and shadow on the table; bouncing balls leave images of rippling water; and the rhythm of play drives accompanying music and visuals. In the process, this project explores new ways to couple athletic recreation and social interaction with engaging digital enhancements.

There are some advantages to the repetition of ideas here. In theory, at least, it should allow for refinement of the responsive content. (I can’t quite say that happens in the example above; the results are very similar in design to the 1998/1999 version.) After all, joysticks are not new technology but people still invent new games.

And in that sense, the top example is a better, more compelling version of what the Tangible Media team did. If art is to get better and more refined, that makes this sort of repetition important.

And we also have much more affordable and accessible technology than we did in the late 90s – now, the work of an isolated group at MIT Media Lab is easily replicated by countless students around the globe. That could lead to new possibilities when we least expect them.

What may lead technologies in new directions is new sensing methods. That means the upcoming Kinect shows promise, because it enables interactions that aren’t possible here; the reason 2013 projects look like 90s projects in many cases is because they sense humans in the same ways fundamentally. Microsoft’s new sensors don’t introduce an entirely novel approach, but they do make that approach accessible to these kinds of projects in a way it wasn’t before.

Of course, invention at the conceptual level is often the best solution. So, I’ll close with an example that redefines the whole application of the medium. It’s not strictly relevant, perhaps, but here instead of creating another table tennis game or projection mapping example, the table tennis balls become the projection surface – tens of thousands of them, floating in the water. Add in the choreographed water ballet with parasols, and it becomes something rather different.

It’s a reminder that you can always reimagine the problem. 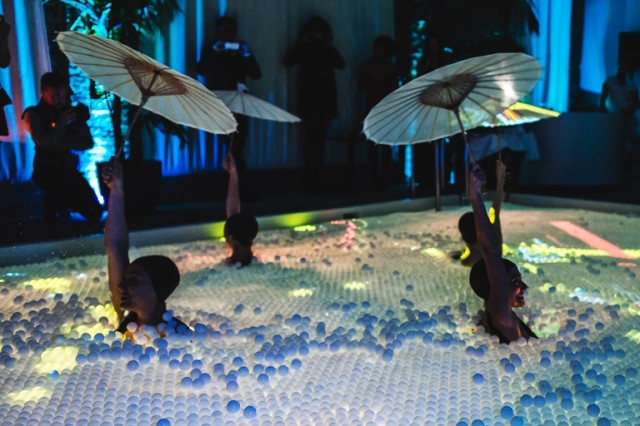 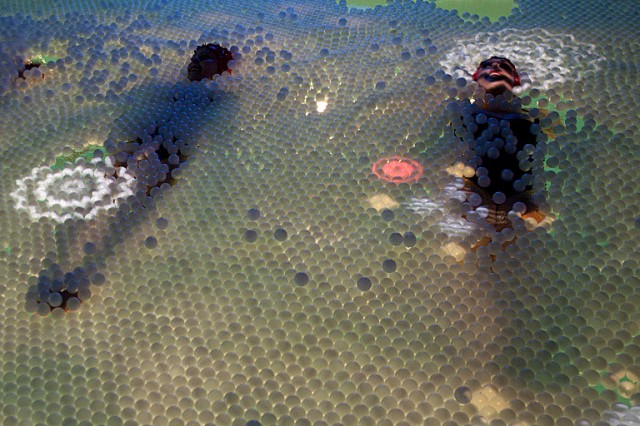 UrbanDaddy challenged us to create a memorable interactive experience in water. Our desire was to create animations that party-goers could swim through. Initially we had no idea how to make this a reality.
Pools are not exactly the most projection ready surface, and initial brainstorms produced many more challenges than we had anticipated. In researching a solution, we had to overcome the fact that projection doesn’t work on the surface of water, it becomes distorted if you project through it, and pool parties are notorious for more standing than swimming. To make something truly interactive, we needed to get everyone in that pool!
We reacted as any any normal person would, and promptly put in and order for 65,000 ping pong balls, enough to cover the entire surface of the pool. To go with our new screen, we created an application which mapped to the pool and displayed a floating river of graphics, pulled by an invisible tide. Audio reactive visuals bumped along with the various dj’s and musical acts taking place poolside. The tactile quality of swimming through ping pong balls, combined with animated colors and light created an interactive event worth telling stories about.
redpaperheart.com/work/poolparty
Songs:
Talamak – Toro Y Moi
Feel It All Around – Washed Out

Anyone for a game of table tennis?