Holiday Card from Shilo on Vimeo.

If hearing the tune from the vintage HBO intro/bump doesn’t send a little nostalgic chill down your spine, you probably didn’t grow up in the US in the 1980s.

Looking back at this old animation earlier this year, I was struck by the old way of making motion graphics. As dramatic music swells in the background, the camera pulls back, sweeping theatrically over an intricate set of the American landscape as the sun casts its final light. It’s all shot real-for-real, real models, real, physical details, all with the kind of physicality that digital animation can tend to lack.

But is there a way to get that sense of discipline in something made entirely in the virtual realm?

Emmy Award-winning creative production company Shilo (California/New York) did a charming holiday spot for the it’s-not-TV-it’s-HBO network. They didn’t just create an homage to the earlier rendition. They sought to imbue the work with the same substance, the same attention to craft, but using the computer as tool.

Directed by Anthony Furlong, the spot is accompanied by a behind-the-scenes featurette. And Mr. Furlong talks to CDM to tell us more about his approach to the work.

Holiday Card “Behind the Scenes” from Shilo on Vimeo.

“HBO came to us with the task of creating their holiday greeting for this year,” Anthony says. “We wrote a variety of concepts and scripts, with our favorite being a take on the original HBO intro from 1983. Not only is it a celebration of the iconic intro’s 30th anniversary, but it became a perfect holiday journey by visiting the homes of viewers throughout the country. For us, home is what the holidays are all about.”

HBO’s holiday card begins in the home of a family sitting down to watch HBO together, then recreates the 1983 intro by flying through New York and then moving through the vast landscapes of the United States. For Shilo, attention to detail was paramount as they designed and built every New York building to match the original within this updated style. The paper world they created provides a unique holiday twist connecting to cards, gift wrappings and handmade charm.

According to Anthony, his team’s research and development phase consisted of building practical houses and characters from paper, which gave them an understanding of how to realistically model each object in their world and which paper weaves would provide the best stand-ins for real world materials. “In accordance with our vision, we treated everything in this CG world as if it were built and shot in-camera,” Anthony adds.

And here’s how Anthony describes the approach to materiality. I think whether you’re working in motion graphics, live and performance visuals, or interactive installation, there’s something to take away from this:

Just as you mention, I also have a very strong association with Christmas and stop motion after having spent my childhood in the 80’s. From the California Raisins to Rudolf and Frosty, hand-made stories just seem such a natural fit.
I felt strongly that what we create for the Holidays needed to have this same tactile feel to bring in the warmth and humanity of this special time of year.

After spending a decade in the industry and seeing things change with advancing technology, I think that a lot of art is being lost by taking the human hand out of the equation. Relying purely on the machine can definitely create beautiful images, but can’t quite speak to the heart in the same way as something built, or at least created partially, by hand. So, this is what we set out to do. We researched and built buildings and characters out of paper so the entire team could understand how it really functions. Folded pieces of paper piled high on every desk, we strived to model every fold into each 3d model so that they ended up being created the same way that they would in real life. Even though the viewer could never see all of these details, it was important for us to maintain this level of authenticity.

With the rules we set up to govern how we created this world, the entire process became a puzzle. We limited ourselves to only creating what could physically be done, so we thought out complex machines that could hypothetically be built underneath each environment that could control each moving part. Some pieces would be moved via levers and filament, while others would have been made using stop motion techniques.

In putting this level of thought and detail into the work, I believe we were able to achieve what we had set out to do.

If anything embodies post-digital mentality, it’s the discipline with which the human and material are reintroduced to the digital tool. It’s digital in context, rather than in the isolation of the virtual – the treatment of the computer realm itself as something real.

And that’s as good a holiday wish for visualists as I can imagine. 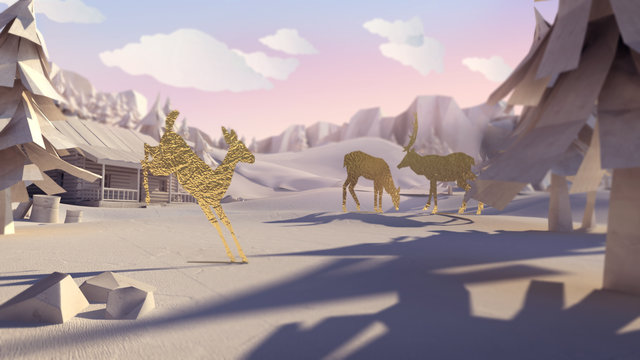 Someone did an 8-bit version of that that was hilarious, but I can’t find it now.