A major breakthrough in physics is heard, not seen

When you imagine inquiring in the universe, your first idea is probably someone looking at something – an image.

But there are other ways of sensing and studying the world, too. Last week’s detection of gravitational waves, confirming the presence of what had been predicted by Einstein, is special in that it heralds a new significance to sound in physics. 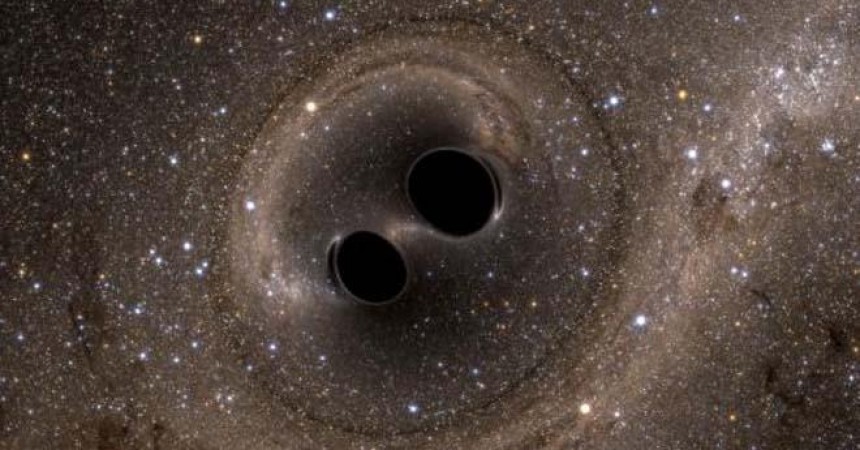 Now, we’re biased as musicians, of course. But that makes it doubly inspiring when you hear the scientists talk this way.

Here’s a video by the legendary Brian Greene, explaining more:

In antiquity, the division between music and cosmos was blurred – sound, mathematics, and philosophy not yet having evolved into today’s specializations. So this notion of a music of the spheres, a resonance between the universe and musical output, was a natural one.

But we don’t think quite like the Ancients. So let’s consider what we mean by sound.

First, even in this enlightened scientific age, we’re all most of the day limited by our senses. So we think of “light” as what we can see, and “sound” as what we can hear.

In the case of the Laser Interferometer Gravitational-Wave Observatory (LIGO), the gravitational wave detectors are really nothing like our ears, let alone a typical sound transducer. They have mirrors and lasers inside, so your first impression might be of something resembling a (really weird) telescope or optical device rather than something to do with sound.

There are antenna arms running 4 km (2.5 mi) long, each containing a long vacuum chamber. Suspended mirrors calibrated with lasers are able to register impossibly minute vibrations – on a subatomic scale (smaller than a proton).

So why do we describe these as sound at all? Well, we are talking vibrations. If the LIGO detectors are built to detect the cosmic equivalent of ripples on a pond, we’re talking very big events (the collision of two black holes) very long ago (a billion years) making a tiny but now measurable impact here on Earth.

But once we get to that level, the principle actually is the same as what happens in your inner ear. Vibrations in the outside world – even these very low frequency, very brief ones – are what we think of as sound. And detecting variation in those vibrations is how we now a sound has happened (that’s the “if a tree fell in a forest and someone is actually there to hear it” idea).

Now, I’m not a physicist. (Seriously – ask my high school physics teacher.) But what we can offer as people in music and sound is a chance to start to talk again with our scientific counterparts. Because from the point LIGO turns its detections into sound, you’ll find yourself in surprisingly familiar territory.

And they also posted the “chirp” associated with the announcement:
LIGOChirp.mp3

There are images associated with major discoveries in space exploration and science, but sometimes, you get sounds, too.

As Dennis Overbye writes for The New York Times, “If replicated by future experiments, that simple chirp, which rose to the note of middle C before abruptly stopping, seems destined to take its place among the great sound bites of science, ranking with Alexander Graham Bell’s “Mr. Watson — come here” and Sputnik’s first beeps from orbit.”

It didn’t take long for people to become intrigued by messing around with these sounds. And why not? Pictures of the universe routinely tickle our imaginations and inspire art, so why not sounds of the universe, too?

For instance, here’s an early example of a stretched-out rendition of the chirp from LIGO. It’s actually a bit easier to hear this way:

Sonifications aren’t necessarily used by scientists in this sort of work, but they can be – sometimes, it’s just as easy or easier to hear a signal as to see it. (And it’s also possible to do both.)

There’s reason to expect more of this sort of sonic activity, too. Now that LIGO has been proven, you can expect more experiments in this range. And the sources are likely to be juicy ones – cosmologist Michael Turner notes in that NYT story that “the loudest things in the gravity-wave sky are the most exotic things in the universe: black holes, neutron stars and the early universe.”

And there are more detectors coming to do just that job – including a forthcoming orbiting gravitational wave observatory. Just as having more senses as humans allows us to be more aware, combining senses and instruments can help verify results. As PBS reports, other groups are “trying to spot a transitory light source that coincides with the gravitational wave signal. They want to see what LIGO hears.”

And while we have had sonifications of electro-magnetic signatures of our sky, it’s a new thing to actually be listening to vibrations directly as a principle means of investigation (hence the “growing ears” references).

Calla Cofield in a story for The Christian Science Monitor explains that significance. Now, interestingly, that author stumbles over the metaphors a bit, explaining sound as a new way to “see” – even as the scientists interviewed very carefully use hearing as the way of putting this in perspective:

No longer blind: Why that gravitational wave discovery is so heavy [Christian Science Monitor / SPACE.com]

So get ready to listen to the music of the cosmos across billions of years.

And what’s next – is there more that can be done with the sonification of this experiment? Remixes? Other ways of listening to the universe? Discuss.

Here are all the gear videos from NAMM you should watch

history
Vangelis has died at 79, as the electronic music world mourns
history
May the 4th be with you, in a new documentary on the sounds of Skywalker
awesomeness
NAP 0.5.0, free realtime visual tool, adds GPU computation, Web, RasPi support, new look
history
Casio’s MT-100 toy keyboard is reborn as a free plug-in for macOS and Windows