Somehow, tucked into the Kazan Aviation University in Tatarstan, USSR, inside a Faculty of Radio Engineering, the Studio “Prometheus” explored experimental aesthetics. In short, while performing the complicated dance of keeping Soviet authorities and the KGB happy, Professor Bulat Galeev and his colleagues managed to create an enormous body of work in visual music.

These projects included everything from small light organs to full-scale projections, in a seemingly endless parade of inventions. And lately, Russian and Western artists alike have been rediscovering them, thanks to ongoing curatorial work by Kazan’s surviving Prometheus Institute. So while a museum was lost, Galeev is gone, and some of the machines are destroyed or in non-working order, there seems to be an imminent rediscovery in the works. I expect that will range not only to the work in Kazan, but a full-on reappraisal of experimental aesthetics throughout the former communist sphere. 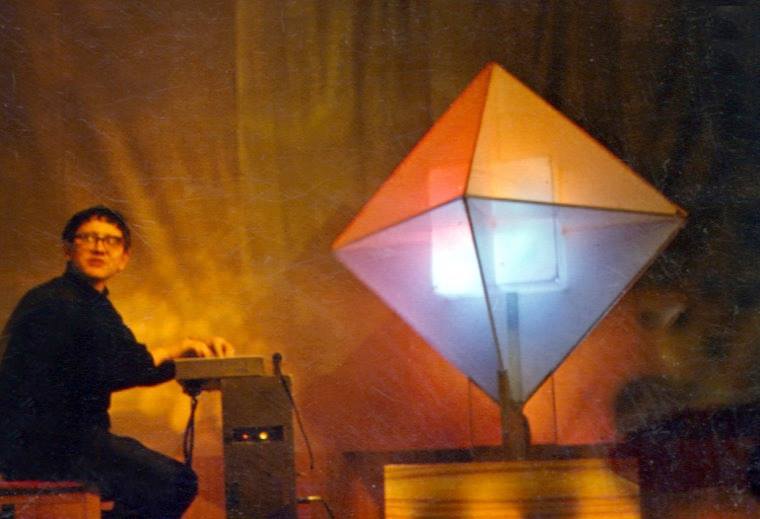 Bulat Galeev at the controls of the Crystal, a mid-60s light organ now being reconstructed.

I’ve gotten involved through a project first initiated by curator Natalia Fuchs (while in the capacity of coordinating the Polytech.Science.Art program of Moscow’s Polytechnic Museum). That has led to some experiments of our own, including collaborating with the institute in Kazan, and reconstructing the Crystal, a tetrahedron-shaped light organ packed with lightbulbs. Artist Dmitry Morozov (vtol) has been working on that with us, recreating the visual instrument to its original plans and specs, and providing modern computer-based control of its incandescent lighting. (That’s not easy, either – only a fragment of the internal device was left, and the plans themselves were sketchy at best.)

In the process of our latest work with ZKM in Karlsruhe, I’ve come across two vintage videos. One is apparently from the late 80s, with English narration, and gives an overview of the project. The other is a 1972 video. 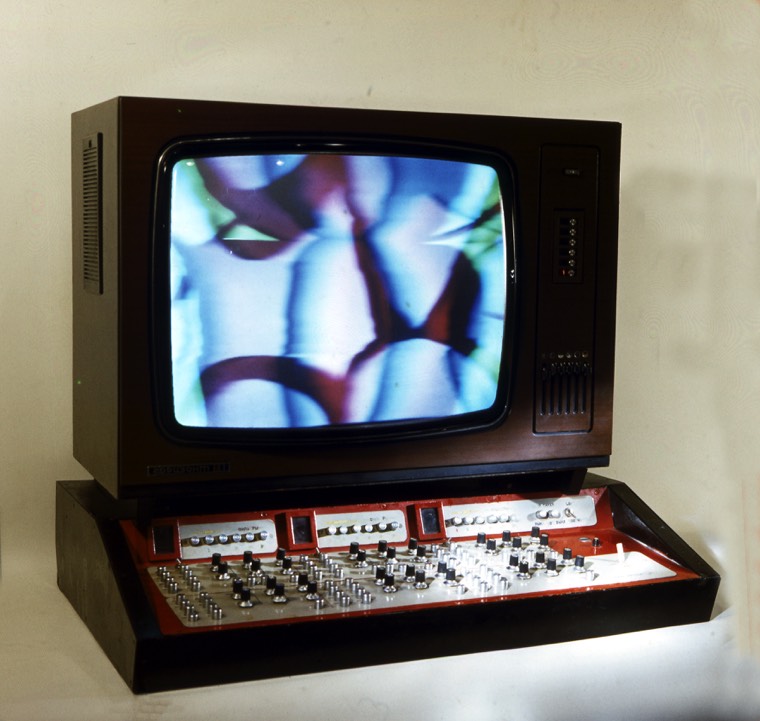 “Electronic Artist” is an analog television painting instrument from 1976.

The newer video is a great overview of the projects and narrated in English, sadly held back by some murky imagery. It’s worth watching the whole thing, as some of the wildest moments are fleeting, to be followed by long panning shots of Galeev’s desk. (Not totally sure who edited this one.)

You’ll have to use some imagination. Having seen some of these devices, the effects are lush, colorful, and futuristic, which is totally lost here. But you do get an unparalleled look at the range of work the studio did through the years.

The spatial audio system is one I’ve thought of recreating — it just uses an array of photodetectors and a lightbulb, a clever X/Y array, hooked up to the multichannel audio system. A lot of the devices here do still work, but this film most notably shows the elaborate cinema setup with its levers.

In the 1972 video you see various visual techniques. Narration is in Russian, but you can follow what’s going on visually – and there’s a lot. Even something as simple as waving a bulb around in front of a lens is a fairly effective technique.

In fact, what this video shows most clearly is the power of layering optical effects. (I think it’s significant, too, that the majority of what’s used here is specifically optical rather than “analog.”) Russia has a rich tradition of optical visuals through the 20th century. And the Prometheus group build on that by managing to produce rich organic effect through relatively simple combinations – layering two irregular gobos (stencils or templates) and then rotating them. It’s not unlike what you do in analog synthesis, but it has all the depth of an optical technique.

So while a full history of Galeev and Prometheus Studio could easily fill a full-length book, let’s enjoy those videos for the time being.

Maybe these will spawn some interest from other readers in similar experiments from around the world. Do send any of those in.

In the meantime, here are two histories of the project.

Available in both Russian and English, an article in INDE details the extensive history of Prometheus. It also illustrates why compiling a history is challenging, as running an institutional experimental art project in the USSR meant layering meanings a bit like those optical effects. “Semi-underground” is a description that seems to fit the paradoxes of modern media art, too, though, that said, in political and aesthetic and institutional meanings.

Into the Light: the story of the the Soviet media-art pioneer Bulat Galeev and his “Prometheus” Institute

Russian only, but there’s also an interview with Natalia Fuchs about the beginnings of the recreation project.

I also wrote an English-language article last year. I actually want to go back and make this history a lot better, but the folks in Kazan tell me they’re referring to it, so it can’t be all wrong.

A big thanks to my friends and collaborators working on this project, and the institutions involved, including vtol and Natalia Fuchs (now at Moscow’s National Centre for Contemporary Arts).

Sila Sveta has also joined us on the project as of its latest iteration.

Prometheus Institute has their own site, but it’s fairly outdated – to the point of listing its founder’s email, despite his having passed away over seven years ago.

And more on our contemporary project as it progresses.

Do let us know about other light art history from around the world — this sounds like a feature waiting to happen.

What if you could touch and feel a score?

Recreate classic MP3 visualizers, free – and use them in VJ apps