Women and transgender artists have too often seen their work in electronic music pushed to the margins. Moogfest’s launch this year puts them first.

Moogfest organizers promise to bring back the mix they’ve been brewing in the latest editions: part music festival, part conference, with music and music technology meeting up with larger themes around science and innovation. The difference is, instead of the presence of female and transgender artists being just another box for curators to tick — “hey, look, we booked some women” — here, they’re leading the announcement. That includes both a 50-hour livestream of back-to-back sets from a pretty amazing and diverse set of artists, plus the first wave announcement of artists.

The result is a mixture of people you know really well (legends like Suzanne Ciani, Moor Mother) alongside a lot of artists who are almost certainly new to you – particularly as they’ve been drawn from disparate genres and geographies. Indeed, these are the kind of people who have been quietly pushing music in new directions, but who might get lost in the fine print of music programs, or pushed to the side in music headlines. In fact, I think the upshot is a potential victory not only for gender equality, but for independent and out-of-the-mainstream music, too. And knowing CDM readers, irrespective of your gender, I think that’s a value you’re likely to enjoy seeing represented.

For Ms. Ciani, the theme for Moogfest 2018 is only natural. “Women have long been intimately connected to electronic music, perhaps because it offered a path outside male-dominated conventional music worlds,” she said. “What has changed is an awareness of women in the field historically as well as a huge influx of contemporary talent.”

Moogfest Shines a Spotlight on Female, Nonbinary and Transgender Musicians

To that I’d add that it’s worth noting that the “influx” and “contemporary” parts are also closely tied to international artists. Our own CDM contributor will have a conversation with a fellow Romanian woman in the Bucharest scene for one link to that; I’ve also had conversations recently with a some Iranian artists about the situation for women making music there (and the resulting international scene as they travel), and … well, look down the list of countries below. 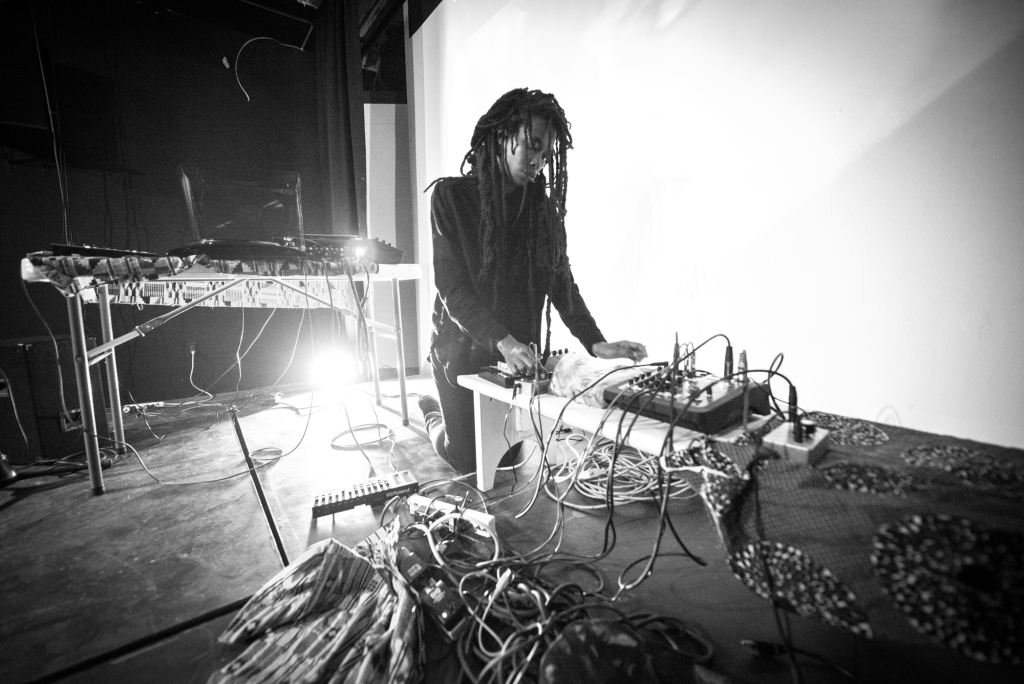 Moor Mother, the ground-breaking experimental project of Philadelphia’s Camae Ayewa, is one of many people deserving of first-wave headliner recognition – and now getting it.

We’ll have some interviews with artists shortly, so Moogfest’s lineup is your gain, wherever you are.

To watch the livestream:

You can watch from anywhere beginning at 12pm ET on Wednesday December 6 until 2pm ET on Friday December 8.
http://AlwaysOn.Live 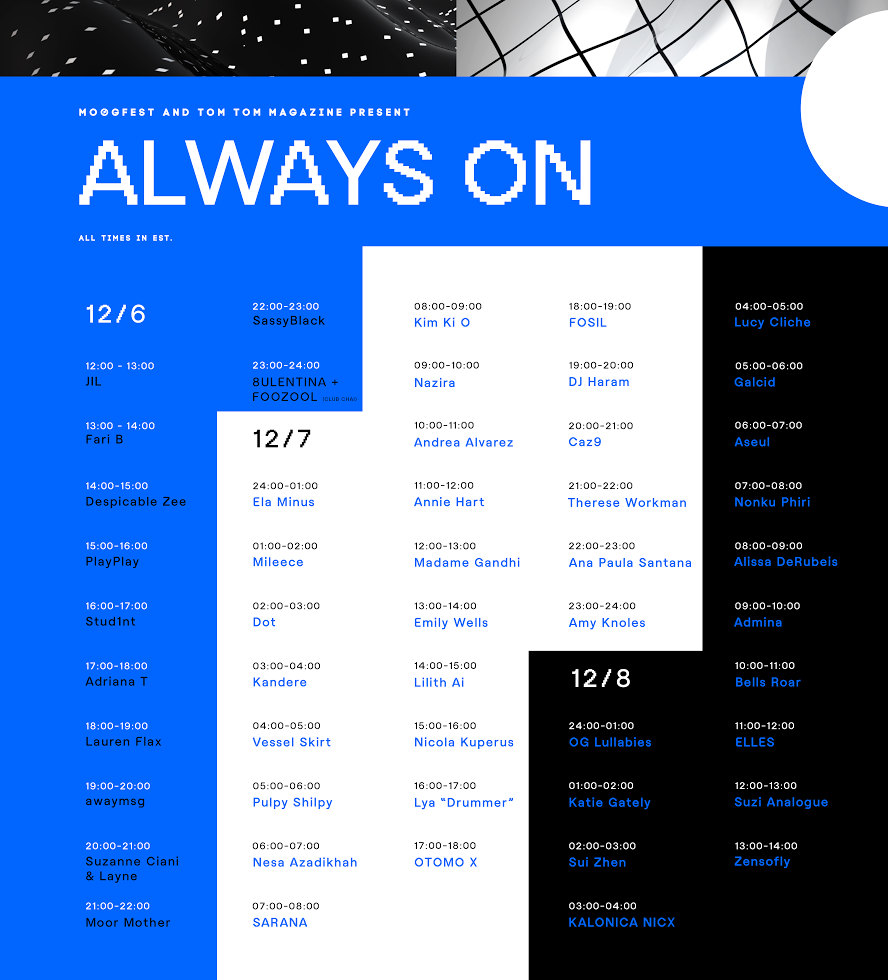 The beginning is – starting very radical, in a nice way! Unfortunately, upstream bandwidth / encoding looks … very choppy. Hoping some of the artists sort that out better. (This is a real roadblock of livestreaming, but that’s a topic for another time.)

Of course, even better than live streaming is – being there in person. (No buffering issues! Or… if there are, seek medical attention!)

Here’s the first-wave lineup announcement, including a couple of friends (and a couple of idols)!

Updated: One artist has chosen to respond critically to her placement in this way. Caz9 aka Caroline Polachek expressed dismay on Twitter that she wasn’t consulted about this announcement, saying “I don’t need a sympathy pedestal,” and several hours later announced she would no longer play the festival. As I wrote here, though, the centerpiece of this announcement was taking artists booked for Moogfest and announcing the non-male artists first – which is different than suggesting gender earned some different consideration apart from gender. Polachek also refers to a decision by a “male curator,” but Moogfest has a curatorial team, which is mixed. Pitchfork covers this, including the Moogfest response.

An excerpt from that response (worth highlighting):

We believe that using our platform to center women, non-binary and transgender people is an important tool to combat the erasure and invisibility that can occur when these identities are kept on the periphery. Please know that no musician was booked for Moogfest for any reason other than their own unique artistry, and today’s announcement is just phase one of our 2018 lineup. As always, the full Moogfest artist roster will be a diverse lineup of talented performers across a wide spectrum of gender, culture and politics.

Polachek has posted an explanation. The short version: it’s not the she objects to the idea itself, but rather the fact that she didn’t herself want to be represented in this way. That seems fair, generally, and it’s a theme I hear from artists pretty often (including some friends). I would certainly respect artists’ wishes, and it seems at least in this one case, there was some absent communication.

As festivals and media (including this one) embrace the notion of addressing equality and marginalization, I think it’s only healthy we have reminders that we need to consult artists and listen. That’s not to criticize Moogfest – I think we simply need to hear out artists involved and improve all we do as a result.

The story of early tape music, microsound, and a Eurorack resurrection