Exploding the Piano with Kathleen SupovÃ© 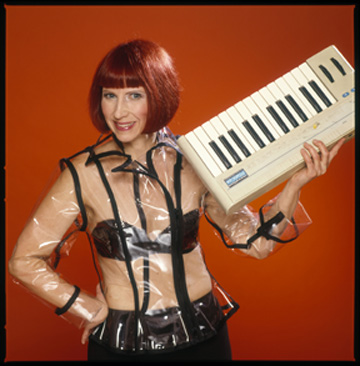 How many people’s resumes include both a gig with the Phillip Glass Ensemble and posing nude for Marie Claire? An evening with new music virtuoso Kathleen SupovÃ© is not what most people expect from a solo piano recital. Her show this week finds her flanked by laptops, plus three projectors running childhood slides, live digital video, and the manic pianist from the Lawrence Welk Show, as she crawls in wearing a pink leopard-skin bodysuit narrating on a wireless.

If anyone can turn the grand piano into a digital instrument, it’s SupovÃ©. She was so enthralled by the capabilities of Yamaha’s MIDI-enabled player piano, the DC7, that she’s commissioning a body of work for the instrument. Collaborations with electronic composers, often involving microphones in the piano, blend the acoustic sound into an unpredictable, thunderous wonderland of colliding sounds. “Multimedia experience,” though, isn’t just about technology — rather than the usual parade of pieces, her concerts tend to absorb performance art rants into the mic and other “theatricals.” Her obsessive-compulsive commisioning of composers has brought pieces for her by everyone from Xenakis to Zorn to Bubblyfish (best known as a Game Boy player) and, well, me.

I’ve got one more evening with Kathleen at The Flea; I’ll certainly miss it. She certainly suggest a broad range of possibilities of what playing can be about — I hope emerging, younger players take note.