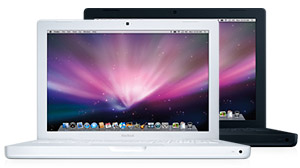 Apple slipped in some almost silent updates last night to its portable line: MacBooks have been updated to come pre-installed with Leopard (Mac OS X 10.5), and sport Intel’s Santa Rosa chipset. This provides frontside bus speeds up to 800Mhz (up from 667Mhz), and includes a new integrated graphics chipset, the Intel GMA X3100 which should offer a speed boost for end users and increased shader support for developers.

Apple also silently updated the MacBook Pro, which now has an optional 2.6Ghz CPU upgrade (up from 2.4Ghz), for a mere $250.

Leopard improves not only OpenGL performance with some advanced backend llvm compiling, optional Quartz GL rendering, but also enhanced OpenGL extension and shader model support on certain cards. According to the Mac OpenGL dev list (which just today posted some new information regarding 10.5 – ironically the OpenGL cababilities matrix does not yet list the GMA X3100), Apple supports Shader Model 4.0 on newer ATI hardware, and possibly on NVIDIA 8-series cards (yet to be confirmed).

Both of these are good news for visualists – better graphics capabilities in 10.5 and updated integrated graphics chipsets will support more advanced visual effects for those who want the slimmer MacBook, and who doesn’t want dual 2.6Ghz of power in the MacBook Pro?

Ed.: My only disappointment with Apple is that there’s not much in the mid-range price-wise, and the Intel chips still lag behind dedicated graphics chips like the NVIDIA GeForce Go (8600 in the case of the MacBook Pro). But the flipside for the bargain-hungry: each time Apple bumps its MBP, you have a shot at getting clearance or refurb versions of the previous model at the sweet spot.

Note that the MacBook doesn’t support the advanced 3D features with its integrated video chip. The X3100 video on the PM965 chipset supports only Shader Model 3.0 and OpenGL 1.5, which leaves out some important shader features, etc., of use to visualists. So, if you can shell out the cash for the MacBook Pro, it will give you far more advanced 3D features — and by extension, hardware-based video. (On the Windows side, it also means DirectX 10 over DirectX 9, but the important thing is the integrated shader architecture.)

Boot Camp Video Out on Leopard: Fixed on MacBook Pro, Not MacBook?