Visualizing Data, and Data as Art 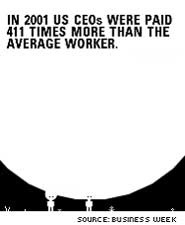 Regine at We Make Money Not Art has a fantastic overview (summarizing a recent workshop) of presenting data and numbers visually:

Visualizing: tracing an aesthetics of data

It’s a great read; well worth working through the whole thing.

The art of presenting data more expressively is exploding fast. It was a big part of the impetus behind the creation of Processing, the artistic coding tool. (In fact, a lot of those post reminds me of some of the ideas Ben Fry explored at a workshop I attended in Aspen, Colorado. While Processing is often used by artists for other purposes, it was born as a means of making data visual.)

Ben describes data visualization as “thinking with the eyes” — provocative stuff. But coming from a music background, I’m always interested in the senses going beyond thought. Could data become a live performance tool? With Processing (and other tools) in the hands of VJs/visualists, there’s nothing preventing artists from taking that next step.

If you’re going to South by Southwest Interactive (March in Austin), I’ll be presenting a panel (and possibly one or two events) on data as art, both in visuals and music, and will speak specifically to this question of performance tool. Already confirmed for the panel session is pioneering interaction designer S. Joy Mountford, who led Appple’s International Interface Design Project and is now on Yahoo’s Design Innovation Team. More details on that event soon.

What happens when data artists and interaction designers collide with VJs and digital musicians? I’m excited to find out.

Radiohead’s Scotch Mist: An Hour of In Rainbows Goodness