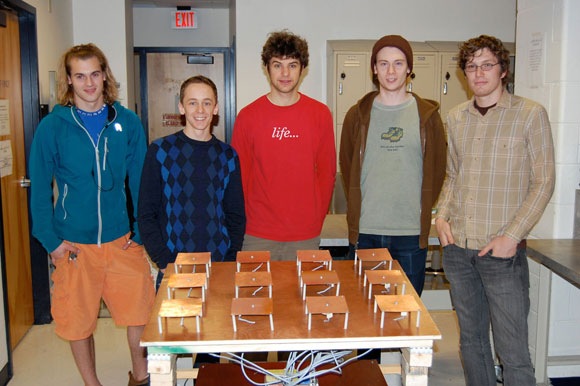 The need for spatial, 3D interfaces is prompting students and inventors to try some creative and economical solutions. Earlier this week, we saw a touch-free, gestural interface built entirely on the principles of electrostatic – yes, as in static electricity. (See the original story, with video.)

Justin Schunick of the team at Northeastern University wrote CDM with more details on the project.

I am the guy who is talking in the video.  We filmed this in our lab today.  We are all seniors in Electrical/Computer Engineering at Northeastern University and this was created for a senior design
competition called "Capstone".  What you see here is a culmination of ~8 months work.

The interface uses an array of copper electrodes to sense a certain change in the electric field created by the device.  The black material covering the electrodes shows how the interface can be hidden beneath surfaces to create a completely invisible interface. It is simple black felt you can buy at any fabric store.  The total cost of this prototype was around $60.00 USD.  [Ed.: Justin notes that that was just an estimate of the parts themselves – let’s just say it wasn’t pricey. -PK] We created custom software to communicate with our microcontroller with C++ and it enables us to use our device as a new type of XYZ computer mouse.  Think nintendo wii controller without the controller — or minority report without the gloves.  This is a perfect interface for a holographic display.  There are millions of applications and we are just scratching the surface – I am sure you are already thinking of all the possibilities enabled by this device.

And yes, I was right that the whole thing is built around a big felt blanket.

I’m thinking of one possibility – something useful to do with your Snuggie (half sweater, half blanket) after the bar crawl. As seen in the WTF Blanket (NSFW, at least with the sound on, depending on where you work).

In all seriousness, while you probably can’t say this of the Snuggie with a straight face, this 3D interface is truly an awesome use of mundane, everyday technology you take for granted. 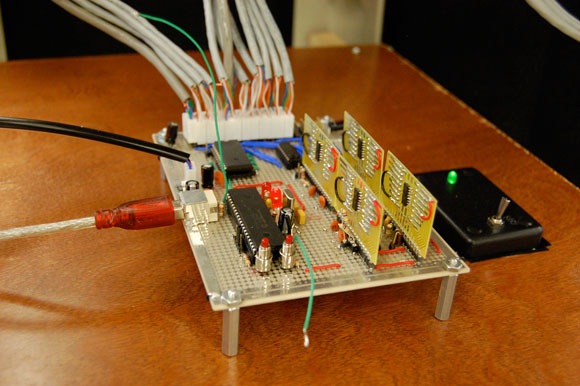 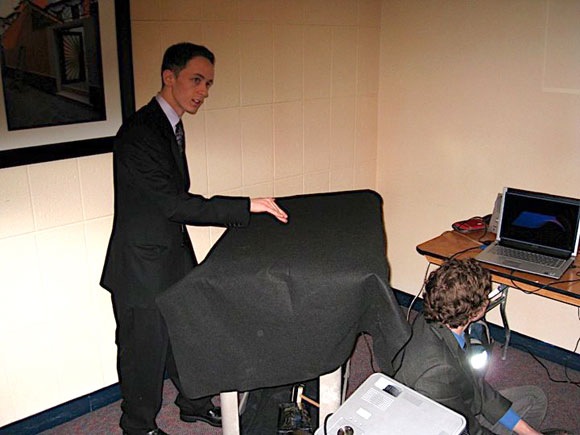 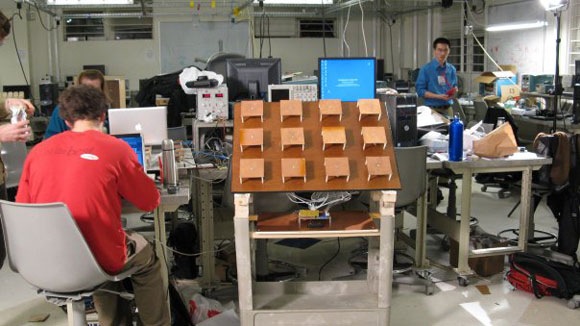 videos
Acid, further out: check Florian with MeeBlip, 303, and Zen Delay
videos
Polyend Medusa 4.0 and FM mode takes hybrid synth out with a bang
designvideos
Instrumental inventions, from LEGO microtonal guitar to deconstructed tuba, at Guthman prize
Electronicsvideos
Watch this entertaining how-to on hacking Mutable’s Plaits for just intonation
We use cookies and other tracking technologies to improve your browsing experience on our site, show personalized content and targeted ads, analyze site traffic, and understand where our audience is coming from. By choosing I Accept, you consent to our use of cookies and other tracking technologies. Please read our Privacy Policy.